SPOILER WARNING: I keep specific story spoilers vague, but I do have to talk about what happens in the games somehow. So I still kinda spoil the player progression / interactive arc. Sorry. 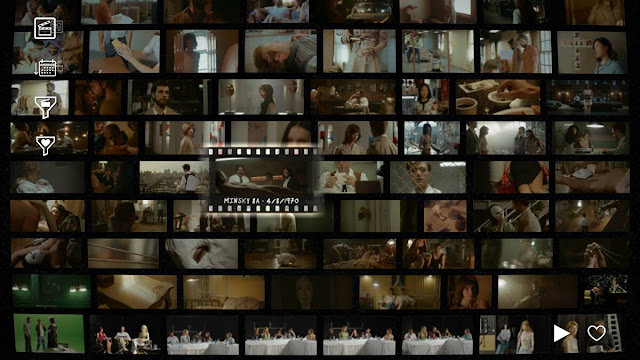 Immortality by Half Mermaid

The third "FMV game" helmed by auteur Sam Barlow and his studio, about collecting short video fragments to assemble complex psychological stories. This time it's a variety of footage from three different fake movies.

Alice Bell's great review for RPS makes a couple important points: (a) the fake movies are self-consciously bad in interesting and campy ways, but in the end you're still kinda watching bad movies / undiscovered cult classics, (b) the main actress is amazing but this is still male gaze-y in a way that somewhat compromises its commentary on voyeurism, especially in the context of women and sexuality in the film industry. It's like Spec Ops: The Line tempering its military shooter glorification with an anti-war moral, or the pseudo-documentary film I, Tonya sensationalizing Tonya Harding's career while also blaming the viewer for it. The voyeurism complicity hand wringing doesn't quite work when the other 90% of the product depends on it. Still, you can argue that it's a stunning achievement just to be able to debate these questions in a video game.

Despite its complex characters and topics pushing against the confines of video game culture, there are still many compromises for the video game format. Actors often hold up objects awkwardly so you can click on them. Videos end on a convenient frame with an obvious clickable. And among the video clips there's an awfully convenient ratio of raw behind the scenes rehearsal footage vs. expensive finished setpiece production footage -- which gets a sort of wink wink lampshading treatment, but still dispels a bit of the otherwise strong "this is how movies get made" magic for me.

I imagine the Bogostian critique here is "why not just make a damn movie", but the sense of discovery with the interface and systems is important here. (Pro-tip: play with a gamepad.) There's a Portal-like moment where you escape the puzzle... but of course like in Portal, escape is just another trap. 9/10.

(PS to Half Mermaid: thanks for the beefcake. Can't wait for the full frontal in the next game!) 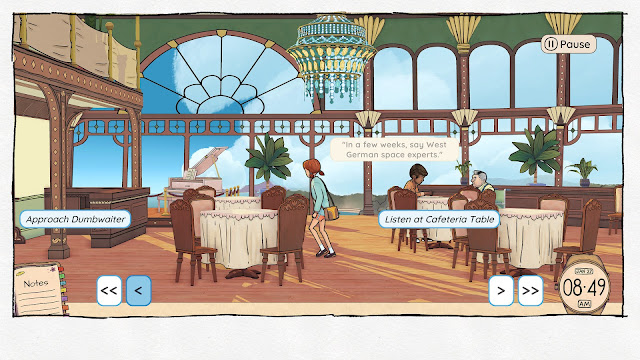 This is a young adult sidescrolling storybook sort of game about hanging out on a steampunk airship recommissioned as a flying hospital / retirement home in rural Australia circa 1980. You're a teenager accompanying her mother to work, talking to various elderly people and learning about aging / the medical industry.

Some of the marketing and discourse focuses on the complex clockwork narrative system design, an immaculate diorama where NPCs are constantly moving and interacting. The closest comparison here is The Last Express or an Emily Short interactive fiction, or the platonic ideal of an Elder Scrolls town. You can totally miss important conversations and scenes because you're stuck in the stairwell climbing animation at exactly the wrong time. This sense of FOMO feels dissonant against the relaxed storybook atmosphere. Especially when everyone moves just a bit too slowly. Don't these characters know they're in a video game?!

In the end the FOMO doesn't really matter (just like real-life) and fortunately the best part of the game is unmissable -- a strong sequence where someone suddenly turns against you. You talk but they don't listen. Maybe you'll just stop talking to them altogether? This isn't a big apocalyptic video game betrayal cutscene where a villain reveals himself and destroys a castle, instead it's a smaller deeper betrayal that instantly brought me back to being a teenager. "Fine, be that way, see if I care!" (Pro-tip: you actually care very much.)

Photorealistic action games tend to exaggerate their emotions into big cartoons with clear feedback. Wayward Strand flips this irony. It's a cartoon game that captures more psychological realism than a photorealistic game. 9/10. 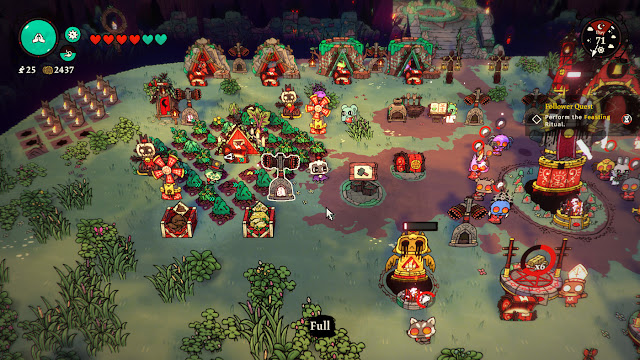 Cult of the Lamb by Massive Monster

This is a Hades-like / Binding of Issac-ish 2D action roguelike wrapped around a Don't Starve / Rimworld-y town building crafting survival system, with all the subversively violent dark cartoon humor of those references. The high visual polish and stellar production values adorn a solid but predictable gameplay loop: you fight through dungeons with random rooms / enemies, collect resources, and bring them back to your hub to build up your village and its inhabitants.

I was most interested in the humorous Frostpunk-like take on tech trees, where you accumulate perks into an (incoherent) political ideology. Do you believe in the importance of live sacrifices? But also veganism? Your cute animal cult will follow whatever "Doctrines" you declare.

Gradually all these advancements and upgrades add up to a NPC-driven town that can maintain and feed itself automatically. Until then, you're forced to actually play the game, chopping wood and grinding for materials. About halfway through this arc, the loops were just feeling a bit too loopy and I lost interest despite its many charms.

Cult of the Lamb is a good game. Why wouldn't it be? It takes good parts of other good games, and skilled talented people spent lots of time and money on it. If you haven't been keeping up with the state of roguelike townbuilders then this will feel nice and fresh to you. But if you're already familiar with all the game design deities invoked here, there probably aren't enough design risks nor genuinely subversive ideas. The cult of the game industry is most powerful of all. 8/10. 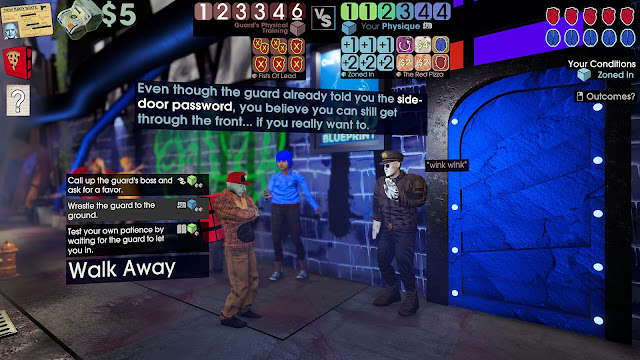 Cosmo D is best known for his Offpeak series, story-driven adventure puzzle games with large eclectic worlds and surreal architecture. Betrayal at Club Low is a compelling departure from this usual style, instead it focuses on infiltrating a specific building across dozens of dice encounters with a tabletop RPG / Disco Elysium like system.

The big hook here is that there are pizza dice. When you first read the words "pizza dice" your mind will inevitably expand to encompass the entire universe. But in the end, when you boil down the pizza (dice) (eww), they're a bit more mundane, providing a collectible economy for level design purposes and to heal you -- or at full health, it's a finesse thing to earn bonus tip money from a dice encounter.

Fortunately, once you move past the promise of pizza dice, there's still plenty to chew on. The dice encounters are surprisingly brutal and challenging. At first it will feel a little meaner than Disco Elysium, which has a vast world peppered with early easy encounters to help you build up your courage and stats. The tightly scoped focus of Club Low means even at level 0 every encounter is a genuine problem without predictable victory, which can quickly send your character spiraling into an early chain of failures, which cause more failures, etc.

It's tempting to put a lot of money into upgrading your Physique dice, especially in the beginning. However, seasoned RPG players should rightly recoil from such a normie strategy. As with Disco Elysium, the best way to enjoy it is to embrace anxiety and failure as a roleplaying approach. So let the laser fence incinerate your body yet again! Spec yourself into a total masochist! That's just who you are: that guy who gets hurt all the time. It's better to buff your Music dice, and let your body and wallet wither away. After all, how many games offer you a "suffering musician" build? 9/10.

A climate crisis documentary in the form of a third person walking sim where you play as a river. A high concept with a high execution.

The documentary process is unusual for games. Matajuegos actually involved indigenous people, scientists, activists, perhaps people who are even all three at the same time -- and you hear their voices and arguments. For a Western audience, this is a fresh climate change story that doesn't center Al Gore (~2005) nor Greta Thunberg (~2020), despite their futile attempts to de-center themselves. Maybe nothing can replace speaking a language other than English. (Matajuegos has been thinking about this for a while, see "Towards an Aesthetic of Latin American Videogames")

The various ways you embody the river are clever, ranging from literal to metaphorical. The weakest is perhaps the wolf form, where the animation doesn't quite match the movement physics. But the intro literal form was my favorite / the most novel, and could easily have been expanded into a more complicated game.

And yet it doesn't get more mechanically complicated. Here the restraint of the walking sim format justifies the minimalism. This isn't a STEM-y systems thing in the vein of Earth: A Primer because it's about embodying all the agency that rivers do NOT have -- they must follow the terrain, much like a player in a walking sim. If level designers divert the player, or humans divert the river, then you have no choice, even though you are alive. 9/10.

(Something interesting happening in New Zealand by the way: the Whanganui River has legal personhood. So far it's been mixed results in terms of actual benefits to the river, and it's maybe even worse in places with dysfunctional legal cultures. For instance, the American response to Lake Erie's legal personhood: "let's sue it" ... and then declare it unconstitutional.)

at 5:42 PM
Email ThisBlogThis!Share to TwitterShare to FacebookShare to Pinterest