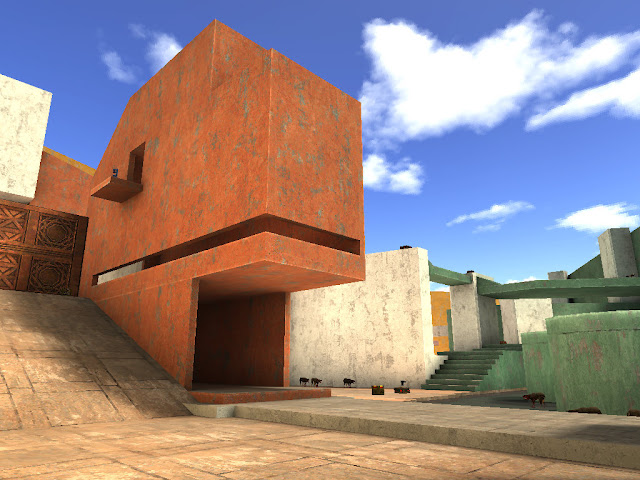 These are design notes about my process and intent, and it may spoil what happens in the level.

I made my new single player Quake map "There a Certain Slant of Light" for the Quake Brutalist Jam, a 2 1/2 week long map jam focused around making chunky modernist concrete themed levels.

I actually made most of this level around two years ago. I wasn't really happy with it, so I never released it. Though when I fixed it up for this jam, I ended up keeping most of the layout and geometry. Maybe it wasn't such a bad map after all?

The two big changes I made were the texturing and the monster placement / player flow... 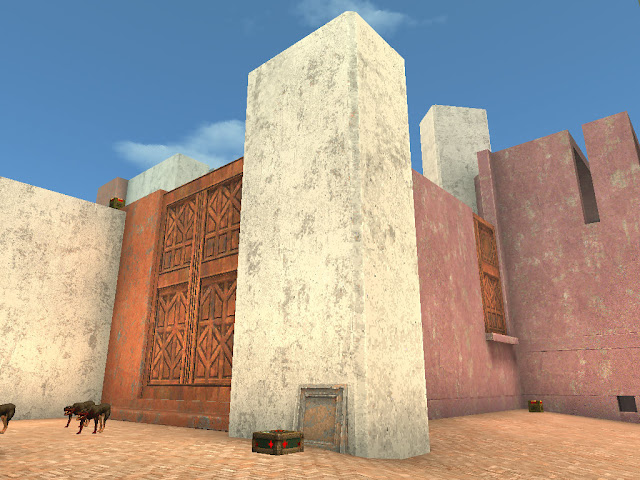 One of my big motivations was to use Makkon's updated textures. Makkon somehow improved upon perfection, the colors feel a lot more vibrant and I feel pretty good about how it bounces light. I also thought the colors were a good opportunity to contrast against the majority of the jam entries, which I predicted would focus on gray concrete with minimal color.

This map's use of color comes from the great modernist architect Luis Barragán. Compared to his contemporaries and successors, Barragán didn't make a lot of buildings nor design huge cities. But his relatively few projects make stunning use of color, with a palette that feels distinctly personal and Mexican. (He disagreed with Le Corbusier -- he believed homes were not "machines for living.") For me this is basically the difference between black and white TV generic concrete vs. color TV. How can you go back? 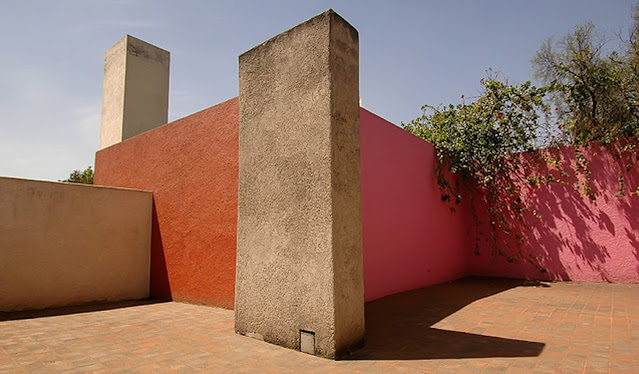 In addition to color, Barragán's brutalism offers another lesson for video game levels: sometimes you must have the courage to let a wall be a wall. The famous roof patio of Casa Barragán is basically just 7 cubes, and it's fantastic, because sometimes a perfectly proportioned box is plenty to look at.

So while a lot of my fellow jam submissions look great and play well, I argue they don't quite capture this spirit of brutalism. Angular concrete is not, by itself, brutalism. You should also strive for a unity and simplicity of form. If you throw down lots of greebles and details, then that unnecessary concrete is just busy ornament, no matter what material it mimics. And ornament is not brutalist! 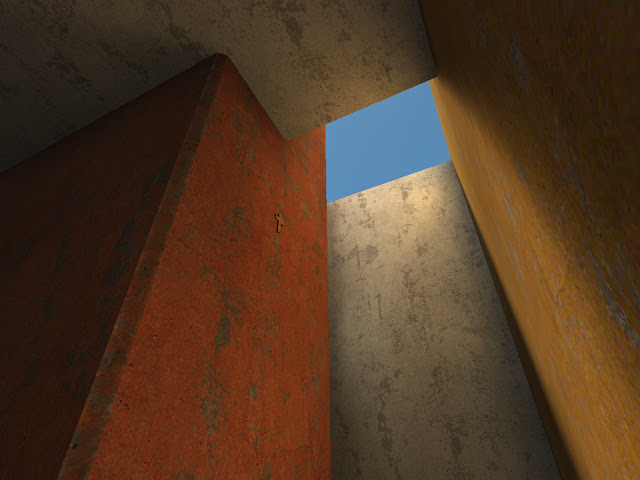 Yet as I aligned the 100th trim texture on a brush, I wondered whether my level was also anti-brutalist in its own way. Texturing, especially trimsheet texturing, was its own form of ornament. Certainly, aligning these fake painted-on bevels and seams goes against this spirit of brutalism?

In the past I've written about video game brutalism. If we faithfully followed the spirit of brutalism, we would only use solid colors or wireframe rendering. Technically from a game engine / rendering perspective, any use of textures is ornament. The true raw material of video game levels is planes and vertices, and so a true digital brutalism would entail exposing that math and geometry to the player, instead of mimicking real world materials. 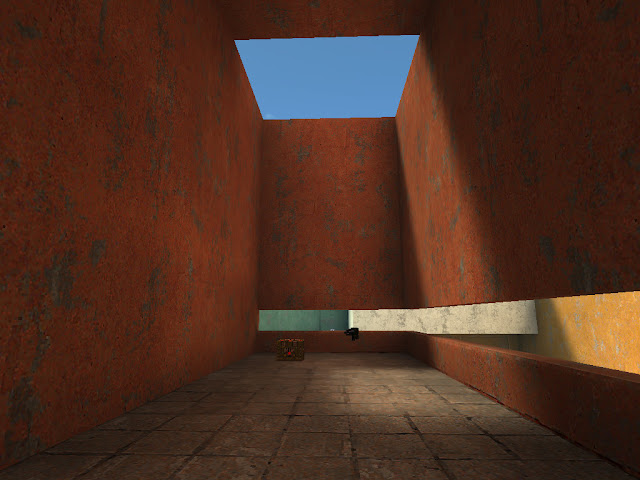 However, I found that if I just left the simple shapes as they were, plainly textured without beveled trims, then the simple treatment didn't feel finished nor intentional enough. To signal to the player that, yes, this box is supposed to be just a box, I had to spend 10 times longer making this box, to ensure every pixel was in place. Labor evokes thickness, depth, and mass. Ornament has a function!

I agonized a bit less about the gameplay, and just sort of freestyled a flow based on the layout. Once I had a flow I liked, I added doors to gate progression. 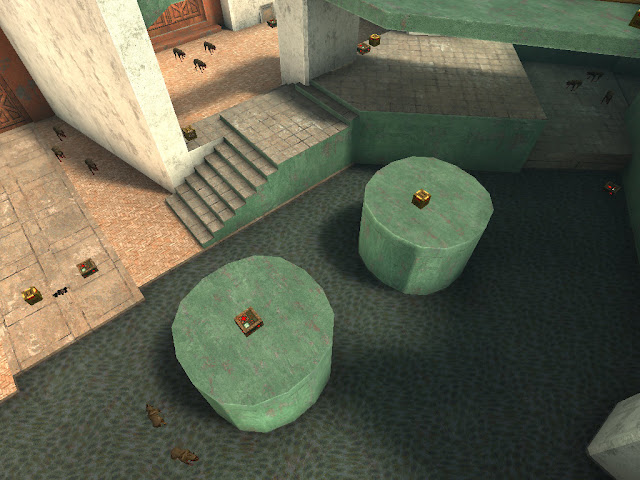 Following my previous releases, I starts with lots of dogs, fast moving yet weak melee monsters which I enjoy more than the knights. This time I throw a dozen dogs at the player at the beginning. It should feel surprising and overwhelming to fight so many so early in the map. Yet there's a lot of big flat courtyards, so it's hopefully not too difficult to run circles and dodge the dogs. On Normal and Hard, I spawn a demon after you defeat the dogs, in case the player cleverly fought from a chokepoint on the stairs.

To escape the courtyards, the player must find a silver key suspended overhead, which requires jumping across a few big cylinders in a semi-obvious way. I predicted there was a 50% chance the player would be too busy dealing with dogs to look up and see the key, so I added some fail-safe wayfinding: if the player finds the silver gate but hasn't gotten the key yet, then I spawn 2 ogres next to the key. When the player backtracks to find the key they may have missed, they will fight these ogres, and hopefully notice the silver key at that point. 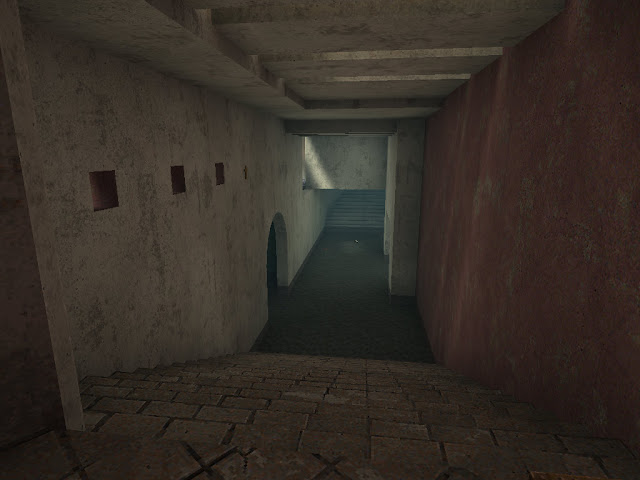 After opening this first gate, the player descends into an underground sewer-like area. It's dark and a bit cramped, to contrast against the big open sunny courtyards. Here the player must unlock a series of silver doors, and do some light nonlinear exploration to find these 3 silver keys in any order.

As the player maps out the sewers, they wake more and more sleeping zombies, which can build up into a gauntlet of a dozen zombies cluttering the tunnels. On easy difficulty, the player has early access to a grenade launcher to permakill the zombies, but on normal / hard they must pickup a quad damage powerup and realize they can continue their quad run into the sewer with the double shotgun to clear the zombies. 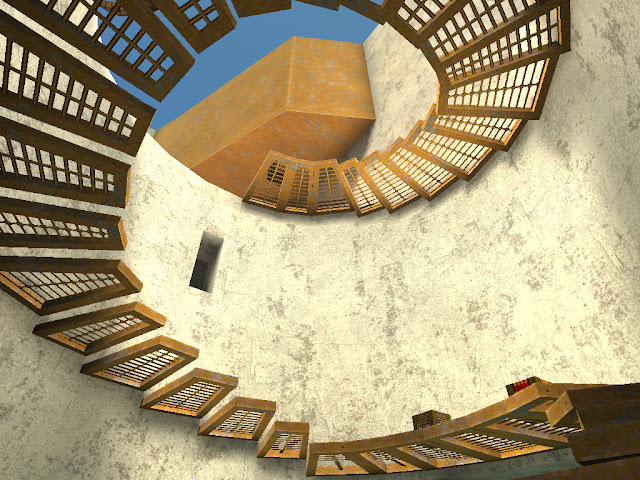 Once the player has unlocked all the silver gates, they press two buttons to open a ceiling hatch, and climbs a spiral stairwell into the sunlight. I'm proud of this moment, leveraging some recent dynamic lightmap tech built into Copper. As you press each button, this area gets progressively brighter and more sunlit, until it's positively glowing.

However, building these spiral stairs was a bit annoying. They had to be small busy details to contrast with the big monolithic smoothness of everything else. They also imply to the player that yes, I could've put these small busy details everywhere throughout the entire map, and I simply chose not to do so. Because brutalism. It's art!! 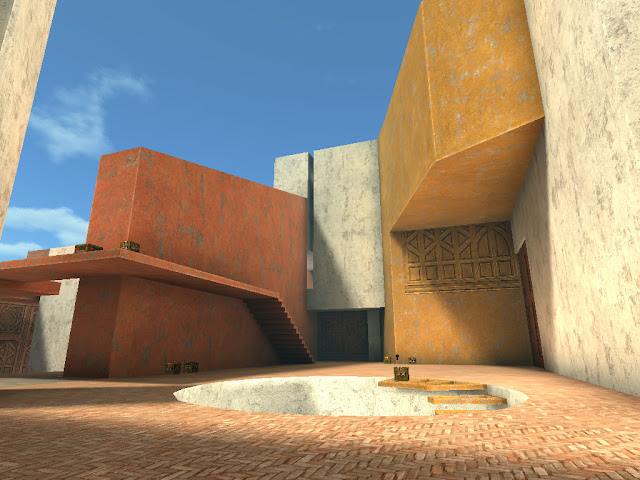 When the player climbs the stairs, that's when I reveal the ultimate goal of the map: a large gold door, guarded by a vore and some flying scrags.

If the player pushes forward and grabs the super nailgun in front of them, I open the other doors and begin a big messy courtyard fight with a dozen monsters and likely some infighting; but if the player runs away, the doors remain closed to let the player regroup. 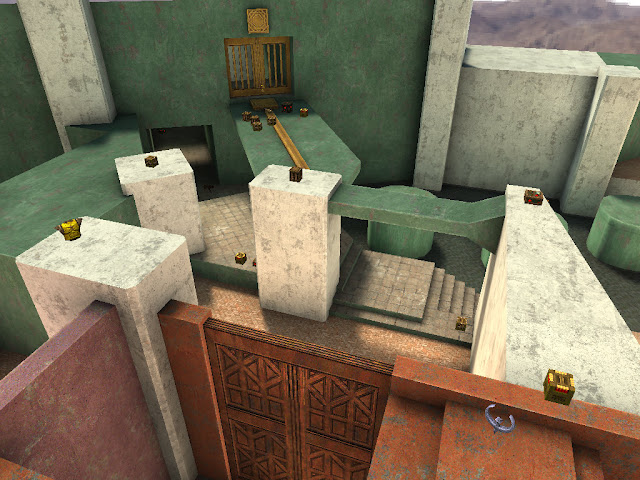 Gradually the map opens up more and more until it's basically a nonlinear multiplayer deathmatch map. Then there's only one place left to go: a platform near the starting point, with the gold key floating beneath an unusual ornament. This keeps with a general design pattern for this level, where I reserved detailed textures for doors and key areas, and flat textures for everything else.

Once the player gets the gold key, I spawn a few dozen monsters, give the player a rocket launcher and a quad damage, and let them freely slaughter their way back to the gold door and level exit.

My playtesters mentioned not getting 100% kills at this point, since the monsters are just wandering all over the place and it's annoying to track them down. I think I'm fine with this. I'm not a big Quake completionist. The player should decide when they're done. 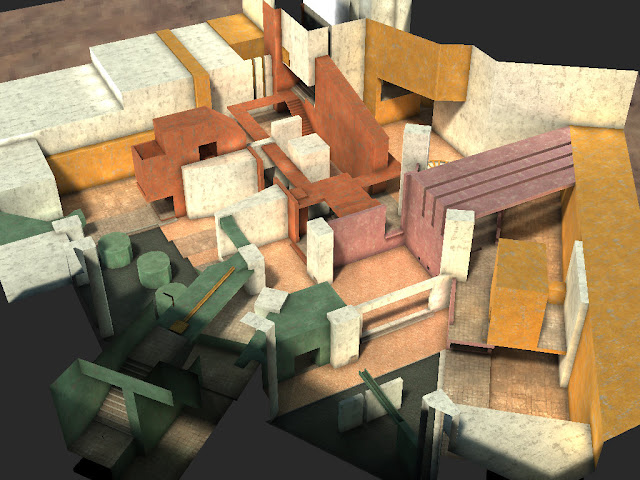 The map title, as usual, comes from a poem. This one is from one of my favorites, Emily Dickinson. I doubt she had retro boomer shooters in mind when she composed this poem in the 1800s, but I still find it surprisingly apt.

There's a certain Slant of light,
Winter Afternoons –
That oppresses, like the Heft
Of Cathedral Tunes –

Heavenly Hurt, it gives us –
We can find no scar,
But internal difference,
Where the Meanings, are –

When it comes, the Landscape listens –
Shadows – hold their breath –
When it goes, 'tis like the Distance
On the look of Death – 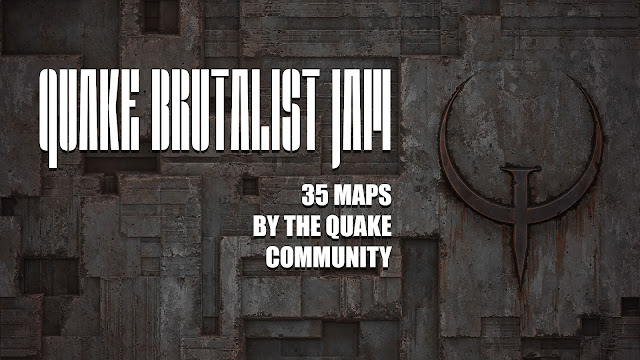 You can play this level as well as 34 other brutalism-inspired levels in the Quake Brutalist Jam pack, downloadable at Slipseer. Thanks to Makkon for organizing!

at 7:26 PM
Email ThisBlogThis!Share to TwitterShare to FacebookShare to Pinterest