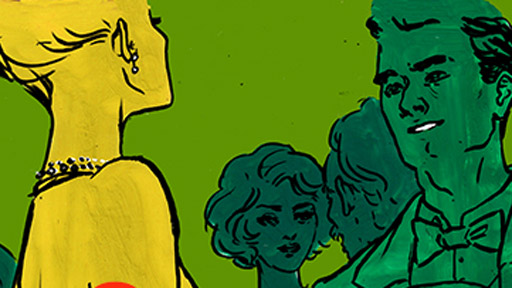 So me and a bunch of people got to play Spy Party at the NYU Game Center. The food was pretty good too. (And the poster for this event is stunning.) Altogether, a classy affair.

If you're not sure what the game is all about, there are plenty of write-ups that you should read first. After the public playtest, we listened to Chris Hecker talk for the better part of an hour. Here's my write-up / notes from the talk:


* * *
First Chris Hecker apologized a lot for being unprepared and stuff. Then he started talking. (Pretty much everything here is paraphrase.)

Most games have you constantly moving. In Counter-Strike, for example, you're constantly adjusting your trajectory, your view angle, etc... but in Spy Party, constantly moving / fidgeting means death. The idea here is that video games should also be about performance; sometimes your playthrough is just "good enough" and you live with your mistakes, you improvise. The key to being a Spy is moving with confidence; be Zen. (Though NPCs also randomly fidget too, just to fuck with the sniper.)

But right now, there's a big problem with Spy Party -- a master Spy cannot perform a mission if a merely decent Sniper is watching. Ideally, a master Spy should wipe the floor with a decent Sniper, regardless, but that isn't the case. Once the Sniper learns a few heuristics, the game goes from heavily favoring the Spy to heavily favoring the Sniper.

Hecker thinks he can fix (or at least help alleviate) that problem by adding a "tells" subsystem. Much like the "active reload" in Gears of War, this mechanic would be an extra opt-in layer for skilled Spies; they can perform the regular, obvious "hard tell" sabotage animation -- or the Spy can successfully time the "active sabotage" to perform a "soft tell." (A similar mechanic already exists with the "sabotage statues" mission: NPCs always lower the statue before replacing it on the pedestal, but impatient Spies might replace it without waiting for their character to lower it.)

This "tells" subsystem is part of a directive to give more "direct control" to the player. Early prototypes had the Spy player move with a Sims-style "click to move" interface. However, the interface was robbing the Spy performance of some crucial vitality and direct agency. Direct control just feels much better.

(But Hecker doesn't necessarily want to get rid of "hard tells" either, because when you really fuck up, but manage to get away with it, it's a huge relief. You feel incredibly lucky. And that's a great emotion to keep in the game.)

So at its core, what's Spy Party about? "Making consequential decisions with partial information." This is the opposite of the highly deductive board game Clue; this is more like poker, or more like flirting, or more like quantum physics. The feedback isn't always clear. There's always a little doubt. We deal in probabilities, not certainty -- and people have the misconception that science is about certainty when it isn't -- so how can a society respond to this mindset? 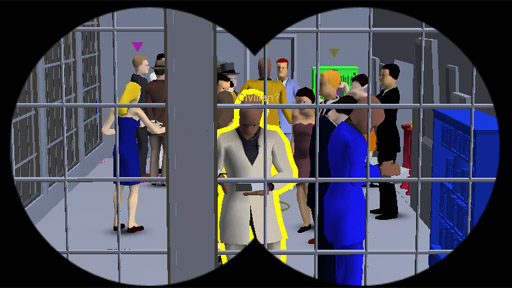 (Then Frank Lantz, who to me looks a lot like a younger Peter Gallagher, started interviewing him.)

Lantz: [Right now the game is great, moment-to-moment, but what about the overall structure, the larger game?]

Hecker: [misunderstands the question and says some stuff about accessibility.]

L: [No, I mean, like, round to round, the gameplay decisions outside of the round, a campaign, a board game sensibility?...]

[Though, about the "larger strategy" to things... At PAX, when we had a Spy Party tournament, we had to have a point system -- otherwise how do you have a tournament? -- so we kind of did the obvious thing. The Spy has 4 missions, and gets a point for each mission, etc. Each match was set of [three?] rounds.]

[... But this is why I don't want to add points to Spy Party, or at least not yet: As with anything with points, players started gaming the system. The Spy could just idle and do nothing until the last second of the third round, then do one quick mission and win the entire set. That's boring and lame. However, I've started making a road towards a point system with the addition of the timer.]

L: [And that's what I like about Spy Party right now -- it's not about points. You don't know who won or lost.]

H: [Yeah, the end screen just tells you exactly what happened, there's no victory or anything.]

L: [And I understand your hesitance, to add something like rewards and stuff, like the politics of pleasure -- do you see where I'm going with this?*]

(* Presumably, Lantz was hinting at "casual" games like Farmville, that are controversial to "hardcore" gamers because the rewards are "free" without much risk or without our traditional notion of "player skill.") 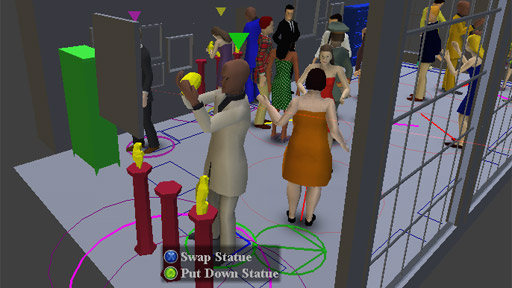 H: [Yeah, points can overshadow player performance and mechanics. We're obsessed with leaderboards and stuff. Games are so much more interesting than that.]

L: [Because really, Spy Party is about yomi.]

H: [Yeah. And yomi is only possible when I know that this core gameplay works, with the emergence and second-to-second decisions and stuff that come with that. I think Doug Church said something like, "five seconds of Quake is more meaningful to players than the entirety of Myst." And he's right. Everyone plays the same version of Myst, but everyone has a unique match in Quake.]

[In general, my model for this game is Counter-Strike. I love Counter-Strike. I want to have a "hardcore" gosu player who's just miles beyond the rest at highly competitive levels of play. That's great gameplay, not some nonsense about hats or anything.]

[But I have a different definition of hardcore here. I still want to expand the audience for video games. One of my goals for Spy Party is for a great people person to be a better player than a great twitch FPS player. For example -- and I love this -- at Indiecade, we had Brenda Brathwaite playing against John Romero. Brenda won 10-0. Literally, John Romero would take a single step and then Brenda would shoot him. He couldn't understand what he was doing wrong, but to Brenda it was all so clear and intuitive to her.]

[And that's a cool direction for games, I think. Maybe for a Sniper tutorial, you'd get a task to "shoot the guy who tells a funny joke." That's a social skill, to be able to recognize that in a game -- and that's certainly doable with our current technology, I just code some conditions in the AI, make some laughing animations, etc. -- which is what Spy Party is about. I want to write checks I can cash. Meanwhile, you have games out there where you do a cool cutscene where you do flips off walls and jump off buildings, but then you can't jump over a three foot wall as a player. That's a really artificial constraint. That's lame.]

L: [Yeah, the game kind of cleverly dodges the big questions of AI intelligence by focusing on an inverse Turing test. And it makes for a great game.]

H: [I want to keep my game doable. I want to be practical about it. I want to avoid a moon-shot with a game like Facade, that tried to solve natural language processing, NPC AI, story generation, all in one try... those are all huge problems. It tried to do too much. If it just focused on one thing, and did a pie-chart to select dialogue instead of trying to do language processing, then the actor AI could've been so much better.]

[Hecker talks about some stuff about graphics and image compression that I didn't really understand, how for a while everyone was focused on the math of compressing bits instead of a perceptual model that purposely discarded some image information. Um, I think that's what he said...?]

... At this point I had to go, but supposedly for the audience Q&A, Hecker went on to say crazy stuff like, "you can't prototype digital games. You have to commit to building the entire system. Which sucks." and other keen insights.
at 4:32 PM
Email ThisBlogThis!Share to TwitterShare to FacebookShare to Pinterest