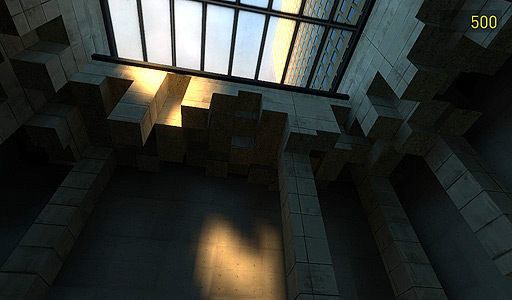 Eddie Cameron's "art mod" is out. Didn't everyone get the memo? We're calling them alt mods now! Anyway, don't let the (self-deprecating?) name dissuade you -- it's actually quite interesting. Download it @ ModDB (reg. req.) or Filefront (which sadly no one's used, in favor of ModDB. I think it's sad and lonely. No reg req.)

My (mostly) spoiler-free opinion is after the jump...

In my own mods, I strive for specific characters and settings but with vague, fragmented stories that you can piece together into a plot or absorb as a poetry or ignore entirely. "tedium" is different in that everything is fragmented and everything is vague... so what do I do with that?

Don't get me wrong. I liked it. Cameron stole beat me to the punch on a visual effect I was planning for Radiator 1-3, and has some cool architecture that reminds me of lun3dm5 from October.

... But that's the thing. If everything is vague, you have to fill all the symbolism with your own experience -- your own mods, someone else's level that you liked, your mother, etc. And as one of those fools with a B.A. in English, I've been trained to regard this as lazy writing because it abandons a notion of "function." The author has very little or no control over shaping the player's interpretation -- the author has given up too much.

Now, there is power in understatement, yes -- a sentence, a paragraph... but a book of it? "A person did something." Not to imply that Tedium (I'm making an editorial decision and capitalizing it now) ever approaches such exaggerated levels of ambiguity, but it's just that I finished it thinking, "that was cool, but so what?"

I also think that game mechanics should be interesting in themselves -- you can translate that as "fun" or whatever. Radiator 1-2 (HwC) is like a first person "parking lot" game; 1-3 is will be a bit like Amnesia and The Sims; 2-1 is about using a wall hack to shoot a lot of people. and Polaris was about, um, staring at the ceiling for 10 minutes.

So Eddie Cameron's definitely breaking some of my rules here, rules that I've inherited from mainstream video games, rules of sculpted narrative and fun mechanics. Which is, to my knowledge, the point of the experiment anyway -- to break rules. Done!

Anyway, you should play it and report back if you want (or send the creator a lovely e-mail of your thoughts). But definitely play it. It won't take you very long.
at 12:02 AM
Email ThisBlogThis!Share to TwitterShare to FacebookShare to Pinterest