So... I Played a LARP: "Ghost Engines in the Sky" by Nick Fortugno

... apparently not all LARPs are about throwing lightning bolts.

It was Nick Fortugno's "Ghost Engines in the Sky", set on a mysterious train in 1850. You're one of many passengers -- stricken with short-term amnesia, of course -- and you have to find out what happened / who should get blamed for it. Overall it was pretty cool, but I felt like there were some issues with the facilitating, signposting and the procedural rhetoric...

(*extensive* SPOILERS after the jump)

(this LARP relies heavily on fresh, unspoiled players -- like, literally, if you read anything more, then consider yourself banned from playing this game *forever.* If I could adequately critique this game without spoiling it, I would... But I can't, especially when it defies the popular conception of a LARP.)

Okay. Ready to be banned from this game forever? First, here's how the game's setup, briefly:

Everyone is a passenger on the train. Each player has a unique persona, private backstory, friends & foes, and a special set of cards.

It's never clear what the cards are; first you think they're money, because they're printed like cash and you can bet with them in a game of poker, but then you later get another set of "named" cards that give you special abilities -- you can read other peoples' backstories, cheat in poker, or shoot people, etc. You also get a special blue "virtue" card that doesn't do anything. You can also spend these cards to find out more about your backstory or more about what's going on.

I really liked that shift, that you think the cards are one thing when they turn out to be another, even though it's totally unfair to a player to have them spend something without knowing the consequences of their actions. Then again, this is a LARP and not a game, per se.

For example, one player went all-in on a game of poker, like in the first 5 minutes of the whole thing, and lost it all. They spent the rest of the game begging for money and being generally worthless and not having fun at all. Which sucks. (To fix this, I would have the first few games of poker have a "3 card bet limit" until mid-game or something, then go no-limit.)

But does a LARP have an obligation to be accessible or "fair" to a player? Isn't "losing everything" a valid performance, and isn't depriving that player of agency a valid theatrical effect?

As more of a game designer, I think LARPs should be held responsible to make their mechanics unobtrusive for all players, so that's how I'm going to handle my critique. Ahem:


* * *
So the facilitating. Fortugno (or Nick? Should I be on a first name basis with him? After all, he teaches in my program...) Nick did a great job, as did his fellow train staff. However, I felt he could've done better with the character assignment. He kind of haphazardly dished the characters out to anyone who wanted them, which is fine and it worked out... but there are two crucial characters who essentially drive the action for everyone else. I don't remember their names unfortunately, but here's an explanation:

One is the head of the "Posse" to kill a controversial passenger named Silas, and the other crucial character, his wife, is supposed to betray him and somewhat side with Silas. The two people he cast as these crucial characters did alright I think, but one seemed like a first-time LARPer like me and was kind of timid about getting everyone on-board for war.

Anyway. Presumably, everyone else kind of just picks sides, or decides to be neutral. The tension builds up over the course of the game as the two sides clash in small battles, until a climactic confrontation...


* * *
... but here's where signposting comes in. Everyone's saving up their ammo and their abilities for some final battle... but we don't know when the end is coming. Then the conductor suddenly announces we're at the last station and it's "judgment day" with no time for action. It's the equivalent of saving up all your hyper-combo torpedo power-ups for a boss fight... but then you get a cutscene in place of an actual boss fight.

However, it doesn't matter anyway: Silas is a red herring, an NPC, a volunteer (who's a great performer, I might add -- he's the guy in the suspenders in the photo below) and it's impossible to kill him because he has too many hitpoints. A lot of players didn't actually realize this, but I realized it a station or two before the end... so then what? 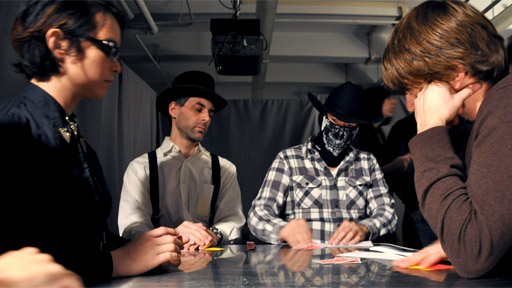 What's the conflict now? My character was part of the Posse to kill Silas, so was I supposed to convince the rest of them to give up now? And if we don't fight Silas, who do we fight? I tried to stay true to my character, "Mitchum," who was supposed to be the Posse leader's right-hand man but who has a change of heart. But I didn't know what goal to pursue after realizing Silas is invincible.

(Though that did intrigue me, that I assumed Silas was another player "just like us" the whole time, with all the limits on agency of a player. I think the original Half-Life 1 beta of "The Ship", Chris Hecker's Spy Party and Assassin's Creed 2: Brotherhood, are some of the very few video games that blur the line between NPC and player character meaningfully like this, with an inverse Turing test.)

(Except Silas wasn't an AI, but a volunteer performer...so why don't we treat MMORPGs more like theater? Blizzard should hire some actors for each server in World of Warcraft. They can pretend to be players when really they have all the power of GMs, and they're kind of leading everyone on cool scripted events.)


* * *
That's where I had problems with the ending and the procedural rhetoric of this game.

Those who kept their "virtue" card instead of gambling it away were able to return home; those who traded their "virtue" for weapons / intel were cursed to suffer in hell for their foolishness. Which is fun.

But by this logic, the easiest way to "win" here is to not interact with anyone. Just sit in the corner and keep the "virtue" card you get from the beginning. (Indeed, that's what some people did.) So the best way to avoid going to hell... is to isolate yourself from other people?

That's an okay message, I guess, but the strategy it encourages -- to sit and do nothing -- is counter-productive to ensuring a lively game about socializing.


* * *
Ah, the socializing. This was a LARP about talking. Sometimes it was great, but a lot of the time it was confusing. Maybe the disorientation was intentional... but for a game of largely first-time LARPers, I would prefer more straightforwardness over disorientation. I pinpoint three main issues:

(a) Character biographies are way too long; it's literally a page of text, size 10 font. You're expected to learn that and internalize that quickly. What happens, though, is you end up interrupting the gameplay to consult your biography to decide what your character would do. I had to stop at least five times to find out who my friends are, or whether I dislike Silas at first, etc. I think a note card of bullet points would be much more suited, so as to not interrupt the flow of conversation.

(b) I don't know anyone's name. You end up having to improvise all sorts of strange, implausible ways of finding out peoples' names: "You'll have to remind me, I forget..." or "I must've been drunk, I can't..." -- and then you feel stupid when you realize that person is supposed to be your best friend or your hated enemy, why wouldn't you recognize them? I would definitely have name tags if I were running this game, as dumb as it might be... but is it dumber than being 2 hours into the game and people still not knowing names?

Imagine playing World of Warcraft when you're told to find "Sir Jonathan the Proud" for a quest -- but you can't see anyone's name hovering over their head. You have to search the city and ask everyone what he looks like, where he hangs out... It's nonproductive, unintuitive frustration.

(c) Too many damn people! It takes me three weeks to learn everyone's name in a studio class of 12. How am I supposed to remember 40 fictional names and personas in an hour or two?

What ends up happening is that you just talk to the same 5-10 people over and over and you form a clique. Which is maybe intentional, but again, it limits avenues of interaction. It would be ideal for everyone to interact with everyone.


* * *
No doubt, I could be criticized for treating this as a game when it's not -- instead, it's a LARP, a theater piece without an audience, I've been told -- but still, this is a theater piece with rules and mechanics. And they didn't always make sense to me... or they seemed counter-intuitive to facilitating interesting interaction.

But don't get me wrong. I still enjoyed myself.

For the record, my virtue card was "Loyalty."
at 7:00 AM
Email ThisBlogThis!Share to TwitterShare to FacebookShare to Pinterest