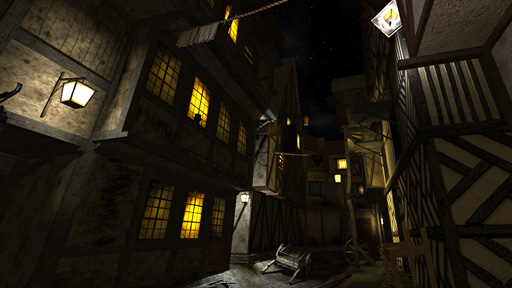 I realize this blog is quickly becoming a "Dark Mod" blog with the recent glut (or tangible lack?) of posts lately, but that's because (a) I'm playing a bunch of Dark Mod levels, (b) I'm actually getting a decent amount of design done.

The real game-changing feature in the freshly released 1.03 is the in-game mission downloader; now you can command the game to automagically download and setup levels from the mission select screen, and it works amazingly well. With a few clicks, you've got hours of Thief-y goodness, ready to deploy. (Next step: a rating system so I can make sense of which missions to play?)

If you like Thief games / the Thieves' Guild quest line in Oblivion, you gotta play the Dark Mod. Thief 4 is still years away, Thief 3 is unwieldy and aging, and Thief 2 requires an hour to get working / the leaked code is still incomplete and will require months or years of fiddling.

It's only getting better and better. (It plays nice with the Steam version of Doom 3 too.)

It's way too difficult. I'm a relative veteran of Thief 1, 2, 3 and a few dozen Thief FMs ("fan missions" is their term for what everyone else calls "mods" or "levels") and I keep getting my ass kicked.

Part of the problem is the uneven feedback from the AI. Footstep sounds aren't loud enough, my own footstep sounds aren't loud enough to correlate with how the AI hears them (e.g. in Thief 1, if you walked on tile, it sounded like you were smashing each tile with a sledgehammer as took each step) and the light gem seems inconsistent in when I'm safe and when I'm not.

The problem stems from the development team: diehard fans who are master Thief players, and design by committee. There's no single "design director", I feel like, which leads to inconsistent stimuli (or maybe it's as-of-yet to be completed features?), the inconsistent art direction, the inconsistent quality of the levels... the community's too small. Look at the "notes" for almost any given level and the author thanks 2-3 playtesters.

Only 2-3 playtesters for a level?! WHAT?! For Radiator, I usually conduct at least 6-7 in-person tests where I directly observe someone play, and maybe 12 remote tests where I send out a release candidate to some fellow designers and such.

I guess it's really difficult to recruit people who are decent Thief players / own Doom 3?

Anyway, there are a lot of problems with the Dark Mod, to be sure, but it seems like mostly an issue of tuning. And that's a good state to be in.
at 2:00 AM
Email ThisBlogThis!Share to TwitterShare to FacebookShare to Pinterest