Love letter to a bridge 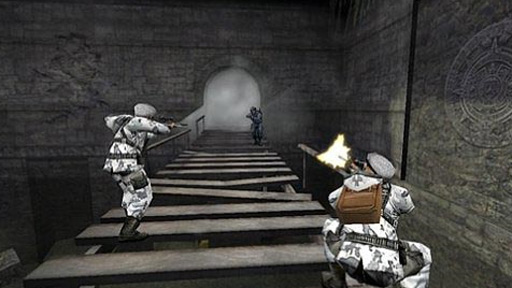 Mention the "bridge in de_aztec" to any Counter-Strike player and they'll nod knowingly.

Sure, you might have Aram Bartholl wanting to build a 1:1 scale model of de_dust "in real-life", but why no love of any similar magnitude for Chris Auty's vaguely Mesoamerican masterpiece? Throughout the entire map cycle, The Bridge has no equal in terms of elegance and genius, I'd argue.

As a service to our younger gamers, who, upon being asked, "what's your favorite CS map?" will respond incredulously with, "isn't CS that really old game?" then blow a large bubble gum bubble in your face and go back to texting a fellow bro -- here, you little shit, here's why The Bridge is great. 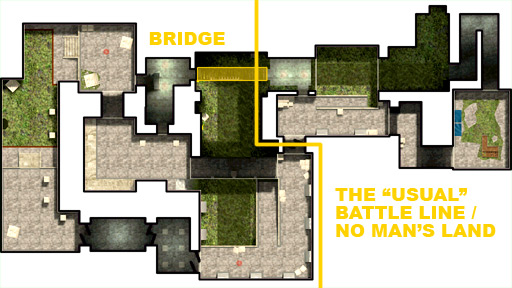 In terms of layout, the bridge functions as a high-visibility, high-risk chokepoint. But the rewards are great: terrorists can get quick access to a bomb site, either team could flank the opposing side's fire-team watching the door, and the bridge determines control over the river underneath.

How do you best communicate the danger of controlling this area to the player?

The bridge is made of widely spaced (2 inch thick?) wood planks resting on an exceptionally weak-looking wood frame that wouldn't support the weight of a leaf in real-life. And the wood looks pale, old and rotten. And maybe there used to be railings but half of them have collapsed (?!) -- it looks like a single bullet will shred the whole thing, or your feet (and grenades) will fall through the gaps; in short, it looks dangerous.

Many players will realize it's somewhat playing on the fragile "rope bridge in the wilderness" trope -- this, like a lot of the psychology in level design, is largely a function of culture. If you had never seen an American action film that uses the trope, you might not "get it" as quickly as a player who has. It's kind of like how some Russian players recognize the layout of the Soviet-era buildings in Stalker games.

So here you have a single set-piece that is quickly and accurately "read" by a player, it is centrally placed in the layout, it is thematically relevant for an Indiana Jones-type ancient ruin, it has unique strategic affordances (again, a smoke grenade often falls off) and you don't need to be in a clan to easily identify it as "the bridge."

It does so much with so little. It's amazing.

... Uh oh, my own levels are getting jealous. I better go.
at 7:00 AM
Email ThisBlogThis!Share to TwitterShare to FacebookShare to Pinterest