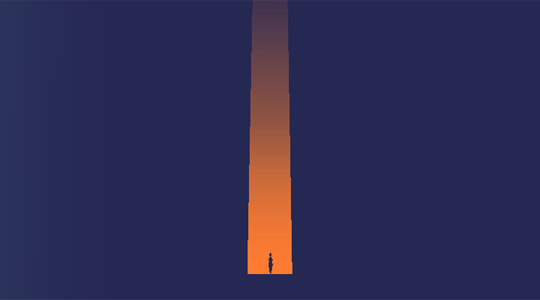 "March" is a first person art-platformer in your browser (never thought I'd type that) about a relationship by some students at Carnegie Mellon.

Brief spoilery review after the jump.

So, I feel that this would've been much better without text, trying to drive home -- into the depths of your skull -- this sense of isolation and anxiety that's already coming through in the game's inspired use of fog, color, and spatial distance. (Its treatment of first person 3D as a 2D composition reminds me of Ian Snyder's stuff.) The text just felt like too much, and they should've been more confident about what they were saying with sound and architecture already -- though I'm not sure what the rote platforming really does for it, other than give you something to do / shut out people who aren't used to first person games.

Still, I think there's a strong sense of "voice" here, much more so than the more technically polished but more conceptually mundane stuff coming out of some of the larger student teams at other universities. They're a small team so they scope their projects well and get games finished, which is admirable in itself. Take a look at their other games while you're at it.
at 9:00 AM
Email ThisBlogThis!Share to TwitterShare to FacebookShare to Pinterest