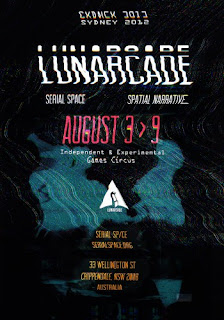 Zobeide will have its public debut in Lunarcade at Serial Space, running from August 3rd - 9th. The Facebook thing is here if you're into that. Here's the scoop:


Exploration is a universal subtext in games. The ‘fog of war’ and line of sight are emblematic tropes of exploration as well as a persistent motif of video games – almost every game involves the implicit mapping of uncharted virtual or representational territory. However, interpreting exploration has a second approach: we can explore uncharted, artificial territory within a game as well as explore the meaning of a work as situated within the real world – we can explore the video game itself as an artifact for the communication of meaning.

I'm also really honored to be mentioned in the same breath as some of these fantastic games and designers! Unfortunately, I won't be able to make it to the opening -- I'll likely be locked inside my Brooklyn apartment, frantically putting together my GDC Europe talk together at the last minute -- but have a blast and enjoy some JS Joust, Australians!

Also: Thirty Flights of Loving is one of the most important games made in the last decade, so make sure you play it at some point.

Also: LONG LIVE NARRATIVE, DEATH TO "MECHANICS" AND "GAMEPLAY"! BURN IT ALL!
at 9:00 AM
Email ThisBlogThis!Share to TwitterShare to FacebookShare to Pinterest