Deceptive epistemologies in strategy game interfaces, and a theory of strong vs. weak fallibility. 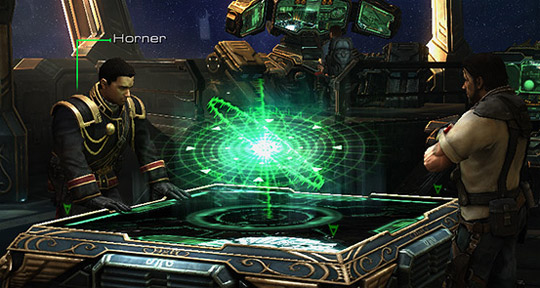 When you play Command and Conquer or Starcraft, you're supposedly some anonymous commander at a console who can see everything and command everyone via some combination of technology and/or space magic. When you play Warcraft, maybe you're looking into a magic mirror. When you play Company of Heroes, uh, you're... uh... a plane is flying above and radioing battlefield recon back to HQ, and some lovely women in neat khaki caps slide pieces around on a map?...

As far as user interface framing goes, there's very little metaphor outside of fantasy magic and holographic virtual magic. Of course, none of these are "problems" in these games, because everyone knows it's a trick -- that is, we all know it's just some stupid bullshit that doesn't matter, and that's okay. ("Tetris doesn't need a plot!!!")

But the only way to coherently read this kind of fiction is to disembody it, to assume you're more like some abstract "force" -- maybe you're the collective human will to survive or collective unconscious manifestation of nationalism, some system of belief guiding all these people and resources toward some grand purpose that few of them can imagine. (Frozen Synapse imagines that you are literally "Tactics," the player character is the squad's abstract ability to think, perceive, and act.) 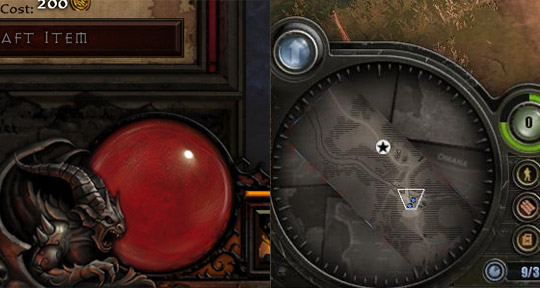 Like, seriously -- what is this interface and what does it mean? We can't read it literally, as if you're a WW2 general at a mechanical gunmetal console that magically updates itself instantaneously, but the interface metaphor is literal: a stone gargoyle, some sort of gray steel compass thing? Are we gods or generals? How do we know what we know, what are we?

Some games focus a lot on story and some even focus on epistemology, or how we know what we know / what knowing means. My current project Convo argues that story is a matter of what characters know, so it's now one of these games concerned with what knowledge is and how it propagates through a system.

So "realistically," your orders in Company of Heroes should take hours for your units to receive and follow as it flows down the chain of command. Maybe it takes a day or two if no one has a radio. Maybe a few lieutenants will disobey or misinterpret the order, and you'll have to collect evidence and conduct an investigation to court-martial them later. Your entire map view is like an ultra-slow form of light and could depict units that don't even exist anymore, and all your aerial reconnaissance can be wrong or imagine things that were never there. Information and logistics can bring failure before you even know you've failed.

Or let's apply this notion of a "fallible game state" to Starcraft: what if your zerglings were double-agents who lied about what they saw? What if someone bribed your marines with a few tanks of vespane gas (gotta love that gas) to ignore some cloaked dark templars? These are your units, possibly lying to you through the interface, about the very state of the game. (As I write this, a few rooks suddenly decloak on the chess board.) 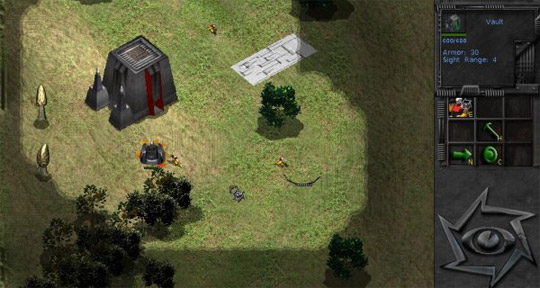 Most game interfaces, though, rarely lie about game state to players. It's generally a really bad idea to make the player blame your game for something.

There are a few scattered instances of deception mechanics in RTS games -- cloaking, burrowing, "hallucinations" / mirror images of fake decoy units. More systemically, these games usually abstract information warfare as shrouded terrain or "fog of war", where getting more intel means building weak but expensive scout or spy units that are fairly time-consuming to manage but important to know whether the enemy is massing rock, paper, or scissors. The enemy's goal is to get you to spend your most precious resource, your attention, on the wrong thing in the place at the wrong time. You know that any attack can distract you from another attack somewhere else.

Fog of war doesn't lie. It tells you someone could be there, at that point, on that terrain tile. This is a known unknown.

I'm interested in stretching these known unknowns until they're almost unknown unknowns, when it doesn't even occur to you that you might be lied to or you're not sure where the fog of war is -- until, suddenly, in the middle of an operation, half your squad switches to the other team and you're forced to abort and flee town.

At that point, ideally, you realize what you did wrong and choose not to blame my game for your loss. That means I have to be very clear and deterministic with how the "game reality" works.

Only two games, to my mind, have focused on outright misrepresentation of reality and directly facilitated false game states in interfaces by carefully filtering the game state feedback:

Eugen Systems' 2010 RTS "R.U.S.E" allows players to cast special spells that hide armies, reveal armies, spawn decoy armies / bases, and mask unit types. Fake units look like any other unit, the only thing that gives them away is their context and behavior.

Did they appear out of nowhere, or near the enemy base? Are they heading straight for your anti-tank guns or are they dodging for cover? Why would X do Y, does it make sense? Ruse, notably, omits fog of war: your sense of yomi will tell you the truth before your scouts do.


Hazardous Software's 2011 RTS "Achron" focuses on time travel as deception. The player can go back in time and change past commands or production queues, then fast forward to the present and reap the benefits -- or send units back in time to reinforce an attack in the past.

It didn't really seem interesting to me until I sent some units back in time to defend the very building that produced those units, then the future units watched their past selves go back in time to defend them before they were made, etc. So what you're looking at may not be the "true" present, once past actions propagate through the timeline and revise what authoritatively happened. 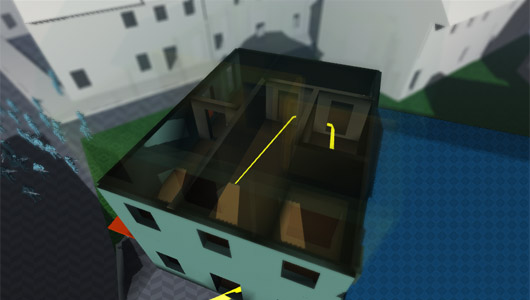 In designing Convo, I've toyed with the idea of your own units lying to you about where they are; you think they're outside doing recon when they're actually sabotaging all your radio equipment and stabbing you in the back.

However, that proved to be a really hard problem to solve: how do you teach a zergling to lie convincingly, or even to lie at all? To me, that would be a "strong fallibility" that incorporates a mix of meaningful strategic intent and AI prediction heuristics of what lies you'd likely believe. I imagined an amazing game moment where your entire spy network doesn't actually exist, that they're not real people -- it's just one Gestapo agent, feeding you lies.

Instead, I'm going to go for a sort of "weak fallibility" -- some units, depending on their relationships or orders, will conveniently "ignore" other units, but they'll will never lie about where they are. You can be assured that your units probably exist, if you can command them. There'll probably be special scripted cases where some agents don't actually exist, though. Character will mostly be a mechanical product of their knowledge, so it's all about figuring out what someone knows.

... Anyway, I'm still trying to sort out all this in my head. It's fun to sort it out, fortunately.
at 11:00 AM
Email ThisBlogThis!Share to TwitterShare to FacebookShare to Pinterest