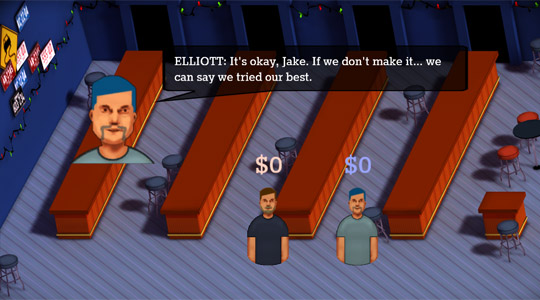 "Barback" is a 1-2 player cooperative / competitive Tapper-ish variant about 2 brothers and a bar. It should take you about 15-20 minutes to play through. It's a Ludum Dare "jam" game, which means I spent 72 hours instead of 48, and used remixed assets from outside sources. The extra day was worth it though.

Theme-wise, perhaps it doesn't really fit with the "You are the villain" theme, now that I'm done with it and looking back. I didn't want to make a game with obvious villains, but I think about my mental concept of a "villain" and by definition it seems to involve blatant villainy and a twirlable moustache. In this narrative, the villains are mundane: your own crushing feeling of failure, or people who care about you but are very pushy, etc.

Originally, player 2 was just a barback and couldn't serve drinks... but if they sabotaged the bartender enough, then they'd get to switch roles next turn. (This resembles the resentment in real-life bartender-barback apprenticeships; you look at the bartender and think, "shit, I can do that!") But the barback class was really boring to use, and what happens a lot is that one player ends up being a barback anyway, so the psychology is intact without concrete constraints.

About the game design: I thought Tapper's sudden death rules were too strict and didn't allow enough "shit to befall you" before the game shutdown. Tapper multiplayer is also really horrible; one player sits out while the other gets to play. I had other stuff I wanted to add -- some patrons would pay with tabs / credits cards, branching dialogue based on player performance, etc. Maybe I'll add those features in January.

All in all, I'm pretty happy with what I managed to put out.

- all art by me, most of it handpainted within 48 hours
- Rokkitt font by someone else
- music by "Stormby" http://ccmixter.org/files/Stormby/39747
- lots of freesound.org samples
- some mechanics from "Tapper", but it's a very different game altogether with my rule changes
at 10:50 PM
Email ThisBlogThis!Share to TwitterShare to FacebookShare to Pinterest