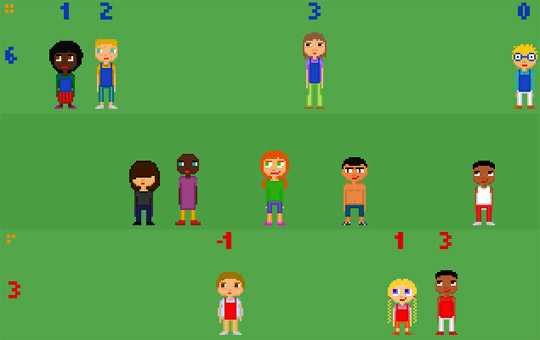 My very strong favorite of the TIGSource "Sports" compo is Pierre Corbinais' "Tiny Soccer Manager Stories." It's a 20 minute-ish puzzle game made in Adventure Game Studio that tasks you as a substitute junior high soccer coach, and your job is to balance the two teams to make sure everyone plays, even the kids who suck.

(INSTALLATION NOTE: To get this to run on my Win7x64 system, I had to change the settings to "Direct3D 9" windowed mode. Try that if it doesn't work for you.)
(HINT: If a particular puzzle gives you a lot of trouble, use the "Skip Puzzle" option in the menu. The game doesn't penalize you or limit you at all.)

I've whined before about how we should narrativize the sports genre, and I think TSMS does some really great things with game narrative using this roster mechanic -- it isn't the first sports mechanic that comes to mind, which just makes this all the more refreshing and novel. Here's why this game is awesome: (SPOILER ALERT)

There are a few typos and awkward disfluencies, since English is Pierre's second language, but it reads very naturally anyway, better than what most native English speakers can supposedly write. Overall, it's still a masterful use of mechanics / puzzles to double as narrative devices.

Bon travail, Pierre! Good luck in the voting.
at 10:00 AM
Email ThisBlogThis!Share to TwitterShare to FacebookShare to Pinterest