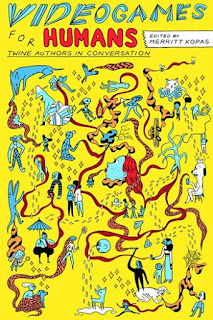 The first reaction most people had was, "it's bigger than I expected." 575 pages to be exact. But that obfuscates the actual format of Videogames for Humans: 27 different close readings / commentaries on short stories.

What those most people actually meant was that they had no idea that 575 pages of thought on Twine was possible, that they're surprised Twine is this big or that it is worth preserving on a tree carcass.

Preserving! In order to preserve something, it has to be more or less "over", and Merritt Kopas has a lot of feelings and anxiety about how Twine will be remembered. In the introduction, she confesses, "late 2012 and early 2013 was an extraordinarily exciting period for me [...] the 'queer games scene' covered by videogame outlets might not have been as cohesive as some accounts supposed, but for a little under a year, it definitely felt real,"

... then later she argues, "but I don't want Videogames for Humans to be seen as the capstone of the 'Twine revolution,' a kind of historical record of some interesting work done in the early 2010s."

So then, this book is partly an attempt to correct or amend a prior history... but not with more history. It wants to break a cycle.

This book is a collection of annotated transcripts from Twine playthroughs, one of the few video game engines that adapts well to printed text... provided that you're pretty familiar with Twines already. This is where the lack of history hurts this book, in a certain sense -- there's no explained context for all this (strong) work.

When I'm reading Lana Polansky's commentary on Nina Freeman's "Mangia" and Polansky exclaims, "Holy shit, am I actually dating Emmett?" -- I laugh because I know who Nina and Emmett are, and I can even imagine Emmett's reaction to a literary debate about whether he's a good boyfriend. It provokes questions about how we can study such "personal games" if they rely on notions of personalities, even though so many personalities are routinely exhausted by a public that feels entitled to access to them. How do you preserve a personality, or would you even want to? How do you set boundaries when your life is part of the art? (Basically: GG has seriously harmed the exploration of craft and new genres in video games.)

Or when Cat Fitzpatrick plays Anna Anthropy's "And The Robot Horse You Rode In On" (merely one of TWO lesbian westerns featured in this book!) and Fitzpatrick does not know, or does not care, that this is probably a remake of Andrew Plotkin's "Spider and Web" except with sexy lady fighting instead of overly intricate Cold War futurism. (EDIT: Anna says this isn't the case. Sorry for assuming... but the structural similarities / differences are really uncanny.) With that background, you can read Anthropy's changes and simplifications to the original plot device as an admonishment of the hardline parser-based interactive fiction establishment and their historic ambivalence about accepting Twine as interactive fiction. It's as if she's saying, "look, Twine can do what the canon parser IF does, and with less bullshit and more style."

This is context, and it will be forgotten.

Perhaps the most crucial super subtext that will be lost on many readers is Merritt's introduction and allusion to a queer games scene. First year doe-eyed gender studies students will be assigned this book and perhaps a link to a Polygon "queer games scene" article which leads with a photo that hilariously crops me out of the 4 person panel at Different Games 2013. (I was sitting to the right of Anna, but I guess I didn't look queer enough!) They'll have no idea that many of the people in that article mocked the idea of a "queer games scene", and this is part of the subtext that Merritt is talking about and why she cordons off the term in scare quotes.

No one will remember any of this.

Ultimately, maybe that's why this book is called "Videogames for Humans." It's for humans.

It can't even claim to cover the "Twine scene", with its omission of Merritt's own work, Porpentine's work, Mastaba Snooby, Solarium, Fear of Twine, and countless other Twines... and Merritt agrees, emphasizing at the end of her introduction, "This is a book about Twine. But let's not let it be the book, yeah?"

Videogames for Humans is about tone, attitude, and embodying an approach.

It seeks to structurally re-imagine and model this radically-unradical way to experience games, to think about the aesthetics of games in grounded experiential ways instead of faffing about the framerate or weapon stats or strategy. (Although the book even covers that base with Naomi Clark's excellent dissection of the mathematical alchemy in Tom McHenry's cybernetic horse mutant farming simulator.)

DISCLOSURE: I bought this book with my own money.
at 2:20 PM
Email ThisBlogThis!Share to TwitterShare to FacebookShare to Pinterest