"That One Time I Repeatedly Gave Birth to Fully Grown Wolves, and Other Gay Sex Games That We Deserve" at GX3 on December 12 in San Jose, California 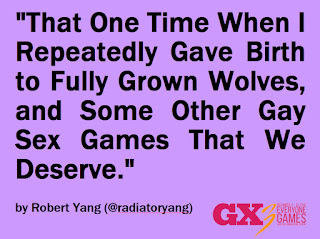 I'll be in San Jose next week for GX3, a video game expo, to deliver a talk entitled "That One Time I Repeatedly Gave Birth to Fully Grown Wolves, and Other Gay Sex Games That We Deserve" about my recent gay sex video games as well as many other peoples' gay sex games.

The talk is motivated a lot by my experience as an independent game developer who sees countless players plead for more diversity from the triple-A game industry. Mainstream representation is important, but why limit your support only to the mainstream? Also, my industrial peers are good at many things, but gayness is definitely not one of those things, so why should people look to them for artistic leadership on this? Answer: they shouldn't, but they might because they're not aware there's an alternative...

You don't have to beg for gay scraps. You don't even have to settle for a game with a gay side dish, with some token gays sprinkled on top -- real people are already making real games where gayness is the center-stage MAIN ATTRACTION, and these games exist right now in the present, not in some distant future dream utopia.

In my talk, I'll be talking about 20+ different games that think about sexuality outside of a standard cis-hetero-monogamous-missionary paradigm. If you follow me or my peers, you'll probably be familiar with some of them -- but I'm betting I'll discuss at least a few hidden gems you'll have never seen before -- and to the majority of the GX3 audience, I'm guessing a lot of these games will be mind-blowing.

See you there, and feel free to say hey.
at 10:35 AM
Email ThisBlogThis!Share to TwitterShare to FacebookShare to Pinterest