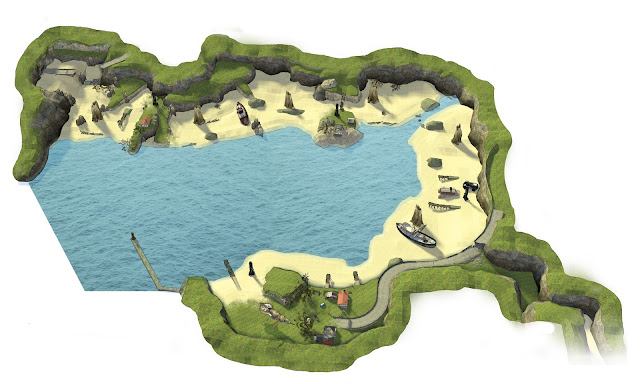 A while ago I wrote about the process of importing Half-Life 2 levels into Maya -- but I didn't divulge why I was doing that work: because PC Gamer UK commissioned a design analysis feature from me, to complement their big Half-Life 2 retrospective / Black Mesa feature for their November 2017 issue (PCGUK 0310). (Thanks to editor Phil Savage for the opportunity.)

At the top of this post, you can see the "blank" overview map of Half-Life 2's d2_coast03. That's basically what I submitted to them for publication, along with some accompanying box-out text and images for their layout artists to use. Stylistically, it's similar to what I previously did for a PC Gamer UK retrospective on Half-Life 1, when I diagrammed the Black Mesa Inbound chapter and the "shark cage" setpiece in the Apprehension chapter.

But for this new illustration, I wanted to be more accurate and import the actual level geometry as a base. It ended up being rather time consuming to do all the test renders in Maya and iterate to that finished state, especially since I'm not used to working in a pre-rendered mode. I also didn't really know what kind of look I wanted? I knew I was partial to a sort of digital papercraft look, but I also struggled with keeping everything readable.

In print, the whole thing looked a little bit like this:

I ended up using two main tricks to finish it up:

(1) I scaled-up landmark objects (boats, Combine equipment) by about ~200% so the shapes would read better when zoomed-out like that. Unfortunately I couldn't figure out how to enlarge the houses without redoing the terrain geometry, so the resulting scale doesn't really make much sense, but video games have always used unrealistic scaling factors anyway. What matters is consistency.

(2) I gave up and I just opened the damn render in Photoshop and painted over whatever was missing... namely the water and terrain transitions. I liked that the layout artist sort of read into my painterly touches, and added grunge-y smudges along the bottom of the page. I think it works.

Doing these maps for a magazine fits into two of my lifelong ambitions: making game design criticism accessible, while exploring new ways of performing criticism beyond an essay.

I'm not under any illusions that they'll make history or anything, but I think they're small competent pieces that do what they set out to do... and it's also satisfying to finish something within a few days, for a change.
at 11:00 AM
Email ThisBlogThis!Share to TwitterShare to FacebookShare to Pinterest