Ruck Me was a game installation commissioned for Bar SK as part of the Artworld Videogames event series, in conjunction with the MEL x NYC festival in 2018. It debuted on August 9th and ran until August 15th. For a variety of reasons, it will never be made available for download, and it will probably never be exhibited outside of Bar SK in Melbourne, Australia.

This post focuses on the game's design and public reception / reaction, and it basically spoils the game. For more information on the game's themes and influences, see my earlier post "Ruck Me and its inspirations." You can also read this CNET write-up by AFL super fan Jackson Ryan for someone else's take on that night. 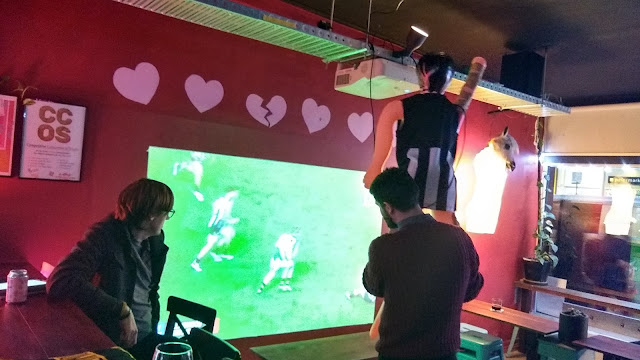 I approached the commission as an opportunity to explore local contexts like AFL's endemic popularity in Melbourne, as well as to Bar SK's reputation for alt-controller "trash art" aesthetics.

Ruck Me is a video-based game that masquerades as a typical sports telecast -- until it suddenly prompts you to grab the doll controller and prod the button mounted on the ceiling.

If you quickly press that button, symbolizing a catch ("mark"), then you watch a video clip where your team (Collingwood) will randomly score either a behind (+1 point) or a goal (+6 points). But if you fail and the timer runs out, then the other team (Richmond) gets to score. You continue this for 4 quarters, which usually lasts for about 90 minutes (including halftime).

As mentioned before, Ruck Me is structured much like VCR Quarterback (1986), a two player American football themed board game with a VHS video gimmick. When you took a turn in that game, you'd sometimes watch a pseudorandom video highlight to reveal the outcome of your play. Sometimes the tape would show a clip of a tackle ("0 yards gained") or sometimes a clip of a successful hail mary ("40 yards gained"). Ruck Me seeks to reconcile this early technological treatment of sport with modern TV simulation aesthetics of sports games.

So far, so straight, right? Enter the doll controller.

When I was brainstorming initial concepts, I settled on a concept for a body-shaped controller early in the process. Keyboards and gamepad inputs are usually very abstract, where a button press is supposed to symbolize a much more complicated physical action. I thought that maybe a more "literal" controller with less-abstracted input would be interesting.

At first I imagined some sort of life-size human-shaped display mannequin that you'd see in a clothing store, with VR motion sensors attached for 6 DoF tracking. I thought it would be funny if the mannequin was large, cumbersome, and a little heavy, and then you'd have to wave this giant thing around in a crowded bar. I also wanted to repurpose a VR motion controller's extremely accurate 3D tracking for a non-VR use case. 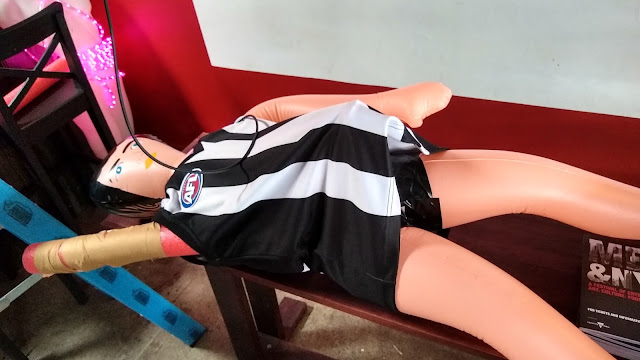 However, all this would've been heavy / difficult to use / expensive to source, and the VR sensors would've been annoying to calibrate and maintain. So I had to take a step back and rethink the materials. Blow-up inflatable sex dolls made more sense and have a lovely softness. As an extra bonus, there would probably be a floppy penis attached to this new controller too.

And instead of a VR sensor, the player would use the doll to jab at a physical button mounted on the ceiling, which would otherwise be too tall to press without the doll. Then, to recharge the timer / the doll's energy, players had to "massage" the doll's sore muscles by mashing buttons on XBox 360 gamepads taped to the doll's back and butt, underneath its clothes.

I liked how Louis' approach kept the technology and mechanisms transparent. Brilliantly, he also kept the doll pantsless, which meant its huge soft-yet-hard penis kept flopping out awkwardly from under his jersey "guernsey".

That's not something you can get with a keyboard or a mouse. It comes from our bodies.

(My one regret with the doll controller setup is that it was inaccessible to short people / those who could not raise the doll high enough to hit the ceiling button, for whatever reason. It made me realize that alt.ctrl methodologies have serious problems with accessibility and disability. I'll talk more about this in another post later.)

I've wanted to make a gay sports game for a while.

Professional sports leagues often claim they're apolitical, but these apolitical politics are often sexist and homophobic. In the US there's been a lot of institutional progress on this, where "pride night" events are now common at MLB, NBA, MLS, and NHL games (notably, the New York Yankees are literally the only MLB team not to commit to any pride events) -- and in NBA games, players get fined for uttering insults and slurs (Kobe Bryant was famously fined $100,000). A lot of this reflects the top-down nature of US sports culture, where announcers frequently communicate game state and lead stadium-wide chants.

When I got to attend my first AFL game in Melbourne, I was struck by the lack of announcements and musical cues. Instead, I was listening to other spectators performing their own stand-up routines and creative heckles. It seemed like much more of a "bottom-up" experience, which I enjoyed, but maybe that also means that a hypothetical pro-gay AFL corporate wouldn't have as much control over the culture as their US counterparts, though the Sydney Swans have regularly run "pride game" events since 2016.

At the Ruck Me premiere, I had a lot of conversations with Australians about AFL culture and gay culture. A few people seemed to think there were some out gay AFL players -- but that number, of openly gay male high-level professional AFL players, is actually zero. (Gay activist Jason Ball played in the AFL Yarra Ranges league and not for a major club.)

That's not to say Australia is especially homophobic, because there aren't any publicly gay MLB, NBA, or NFL athletes either.

But it's important to show that "progress" isn't always as progressive or inevitable as you think. If people don't show up and don't put the work in, to create a better climate and advocate for others, then we assume that someone else somewhere has done that work. Meanwhile, the world keeps burning. 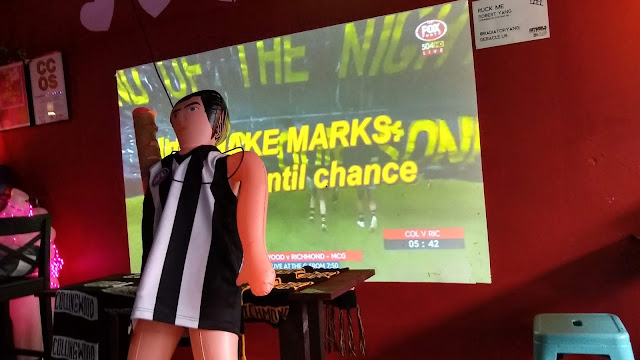 Making an alt-ctrl reaction-based arcade game with zero 3D graphics was definitely out of my wheelhouse, but I think I'm mostly satisfied with what I was able to do within my timeframe and constraints.

There were a few other features I wished I could've figured out: I wanted a live Twitter presence where people could tweet at an automated account and see their message "live" on TV. I also planned an epic rewind-style ending in homage to the ending sequence in Super Hexagon, but I couldn't get reverse video playback to work correctly.

Despite these video problems, I remain mostly fascinated by video. What makes video feel like video?

In real-time 3D, you rarely want to overlay game cameras because that's a huge rendering cost to incur for each separate camera view. Repetition and looping is also inconvenient, because if you want to repeat any kind of simulation or system, then you have to carefully track and reset that system for each iteration. Meanwhile, pre-rendered video footage lets me gleefully overlay and loop the shit out of everything. It creates some really lovely juxtapositions sometimes, and lets me break from the slavish continuity of games. It's definitely something I want to explore more in the future.

So yes I'm deeply interested in exploring the "body" in my games, whether it's the body of a beefy jock, or the body of the video container and codec artifacts. Everything is game feel.

Oh, and by the way, as of this time of writing -- Collingwood is in the grand finals this year. They recently just defeated the Richmond Tigers, the same opposing team featured in my game. Coincidence?

Clearly, homoeroticism was good luck. I claim all responsibility. You're welcome, Nathan Fuckley.
at 12:02 AM
Email ThisBlogThis!Share to TwitterShare to FacebookShare to Pinterest