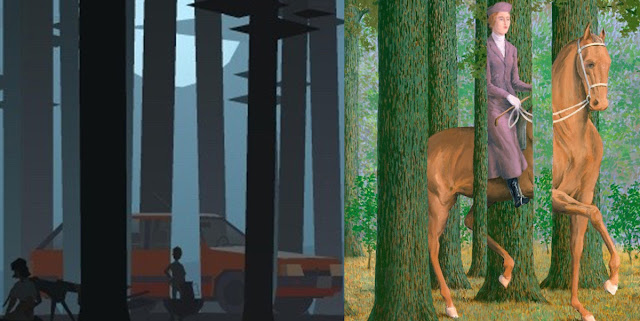 I got to attend the private premiere of the new "Videogames" exhibition at the Victoria and Albert Museum in London. The show features a special HD remastered version of my game Rinse and Repeat, configured to run once per hour instead of once a day. At about halfway through, I'm also in a video panel of talking heads, giving a pithy quote on video game violence. Oh, and Nina Freeman and I interviewed each other for the exhibition book. I also spoke to several British newspapers for the exhibition, like The Guardian and The I.

In the past, most mega-museums have gone with nostalgic industry-approved perspectives (The Smithsonian) or they curated games as part of a generalized technology exhibition, and in doing so, barely say anything about games (Museum of Modern Art, New York). The V&A, in contrast, is the first huge museum to balance an industry production perspective with a specific political and cultural approach. The curators Marie Foulston and Kristian Volsing rejected the boring historical survey methods of other museums (fuck off, Spacewar and Pac-Man) and even their commercial AAA choices feel slightly eclectic and unusual.

It is, by far, the best major museum exhibition on games that I've ever seen, and every other huge cultural institution in the world should be taking notes. 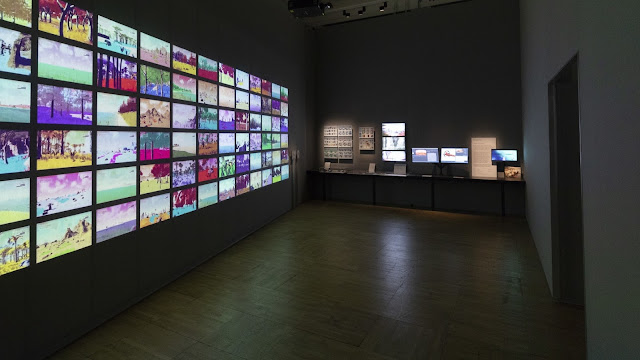 When your game exhibition is just a playable demo kiosk with the game, can people even understand what the heck they're playing? Is the first-hand experience of gameplay even that interesting (or comprehensible) to someone from outside of game culture? Or, if you're a gamer, you don't need to go to the museum to play Journey.

But if you don't focus so much on displaying a game demo, then what do you show? The V&A answers authoritatively: instead, you show basically everything else, and there's a lot of it.

Spoiler alert: what follows is a description of the exhibition. 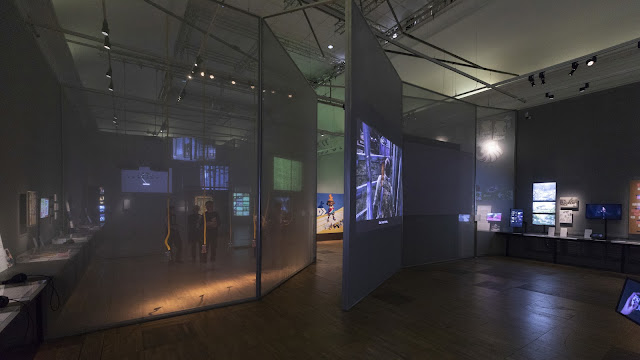 The first part of the exhibition focuses on design process, with a structured tour through the development of several AAA and indie games. Some of the games are playable, but the V&A tends to focus more on design history and process objects, so here they've collected an impressive range of notebooks, paper drafts, concept art sketches, personal possessions, project planning scrum boards, and blocky 3D prototypes.

(Oh, and they literally mounted a Magritte painting next to Kentucky Route Zero, holy shit!!!)

They even got the famously reclusive FromSoftware to share some of its materials, as well as some fantastically tense internal playtest video of Miyamoto critiquing Splatoon. This is maybe the first time a big museum has actually taken advantage of its privilege on behalf of game culture, to negotiate with other huge companies and broker the lending of these items, whereas smaller venues basically can't do that. 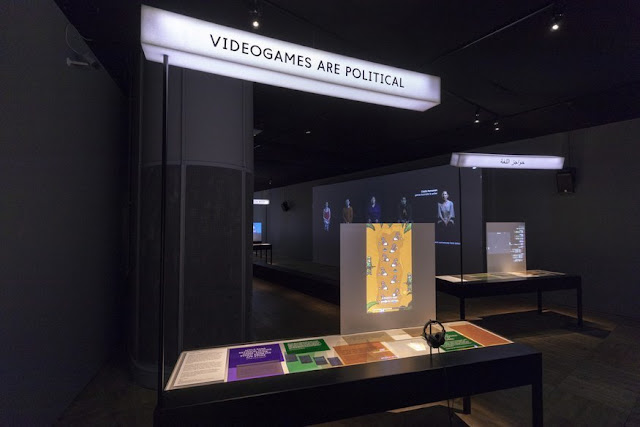 The second part of the show is about politics, featuring projects like Molleindustria's Phone Story, Ramsey Nasser's قلب, Hangar 13's Mafia III. In the middle, a long bench with a large video projection of five critics, each taking a turn to speak on a topic. Sometimes you'll see Katherine Cross talking about gender equality, or Tanya DePass on racism and representation, or Rami Ismail on the painful ennui of reversed Arabic in games.

This is the "serious" part of the show, in a quiet dark room with a lot to read and hear. (The contrast is supposed to be jarring. Right before the U-turn to enter this room, you're showered with the loud colors of No Man's Sky.) This is also the part of the show where my game and my video likeness live, in the darkness of education and activism.

Then from that dignified gravity, you walk into the next room...

... a huge theater where a hell chorus of YouTubers are screaming about Minecraft. This is the "player culture" section, V&A's radical gesture to elevate fan culture to performance art.

When I revisited the exhibition a few days later, I got to witness a dozen British grandparents patiently watching the opening of the 2017 League of Legends Finals. As they watched these preppy teenage nerd gangs cruise each other in an eerie forest, swearing brutal merciless East Asian nerd revenge upon each other, all these little text pop-ups annotated and explained what was happening in the video.

Maybe that's also what feels different with this exhibition: the understanding that there's so much to explain and unpack and evoke. Most other exhibitions often leave it at "Minecraft wow!", or omit the cultural and social aspects of games entirely. I mean, this show still only spends like 3 minutes on e-sports, but that's still 3 minutes more than anyone else. 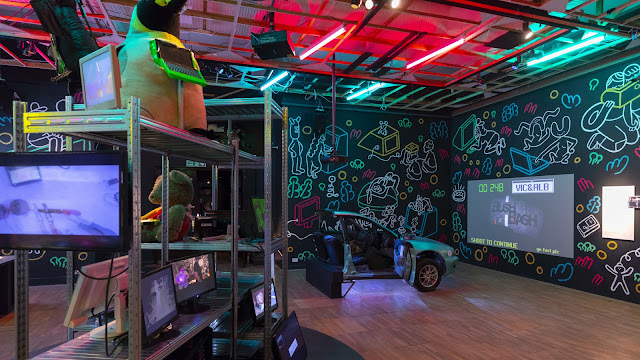 The last room is literally an arcade with a do-it-yourself "disruptive" flavor. There's several custom-built arcade cabinets (fabricated by We Throw Switches) featuring games like Envirobear 2000 and Breakup Squad, as well as a ROFLpillar suspended from the ceiling, Kaho Abe's "Hit Me" helmets, and no less than three Line Wobbler stations, all anchored by a huge Babycastles shrine made of sexy posters, industrial shelving, and a used-up QWOP Bear / GIRP Bat...

Oh, and don't forget the half of a car shipped in from Australia ("Bush Bash"), courtesy of SK. This section captures the mood of fun rowdy independent games events like Fantastic Arcade, AMAZE, or Death by Audio Arcade. I thought it was pretty clever to end with what's basically a loud jubilant punk party.

I was also a little jealous that all these strangers get to experience this somewhat underground subculture without "having to work for it", and in this unhealthy way I'm worried about "outsiders" ruining everything, but hopefully it'll be a net positive and lead to a surge of interest in local games communities. 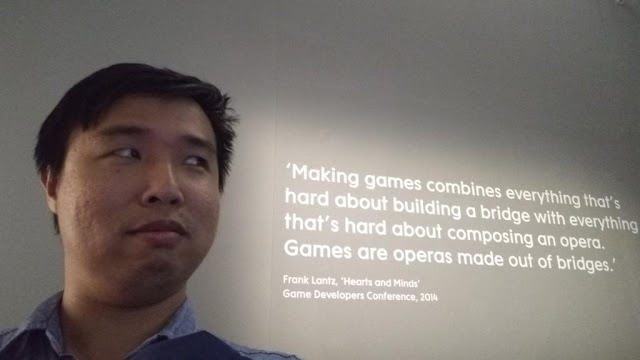 As I write this post from my apartment in New York City, I realize how much of the "New York scene" and approach is in this show, reflecting back at me like a mirror.

One of the first things you read in this exhibition is NYU Game Center director Frank Lantz's claim that games are operas made of bridges, in authoritative glowing sans-serif. Recent NYU Game Center alumni / prodigy Jenny Jiao Hsia is probably one of the youngest artists to ever be shown in the V&A. I also count other featured artists like Catt Small, Bennett Foddy, Ramsey Nasser, Kaho Abe, Nina Freeman, and the folks at Babycastles among my peers, all of whom I've met from living and working here.

I'll say what I told countless British people -- partly to needlessly compliment them -- but also because I believe it: a show like this couldn't have happened here in New York.

In fact, maybe nowhere else in the world has this combination of resources, funding, research rigor, and local talent, all combined with a 166 year old art world institution willing to give fresh young curators so much power and responsibility. Hopefully after this show, it will inspire other museums to follow, and these conditions won't feel so rare or impossible to me anymore.

So let's celebrate this show as a wonderful landmark, but let's also keep in mind that this is all a marathon, and we still have 25 more miles to go.
at 1:31 PM
Email ThisBlogThis!Share to TwitterShare to FacebookShare to Pinterest