The powerful presence of non-presence in "Out For Delivery" by Yuxin Gao, Lillyan Ling, Gus Boehling


"Out For Delivery is a 42 minute playable documentary shot with a 360-degree camera. The slice-of-life experience follows a food delivery courier in Beijing on January 23, 2020, the day before Lunar New Year, and the day Wuhan shut down due to COVID-19."

This is one of the few 360-movie experiences that really works.

In the past, I've criticized the VR empathy machine complex and its cynical use of Syrian refugees to sell VR kits, but Out For Delivery wisely sidesteps the VR ecosystem. Without the restrictions imposed by the head-mounted format, such as a stationary camera (a bumpy moving camera makes VR viewers sick) or impatience (VR demos demand constant engagement), the designer and filmmaker Yuxin Gao is free to focus on the actual subject at hand. The camera moves freely, cuts freely, lingers freely. The result is the most difficult aesthetic to achieve in art: honesty. 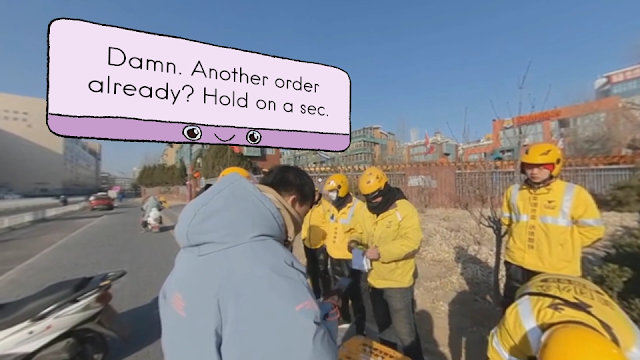 As we follow the driver get lost in a labyrinth of luxury shops and streets, we sort of get lost and disoriented with them too. Pedestrians try to help them / us figure out where to go. Bewildered elders stare as if they notice our gaze through the screen, but politely say nothing. This is already a stronger sense of humanity than what most self-proclaimed empathy machines achieve, but here I think the overall audience effect is more like Brechtian Verfremdungseffekt. The translation pop-ups feature small animated faces to convey the emotional undertone that's lost in the text -- but isn't it a little sad that these emoji are even necessary? Why is it so hard to understand how people live, even when we see their faces and hear their own words?

For most players, I imagine this documentary acts as a triple distancing: our temporal distance from January 2020, our geographic / linguistic distance from mainland China, as well as a middle class distance from working class food workers. Sure, we don't know much about China, but maybe we don't know much about America either. Like, I only know a handful of people who've worked as delivery drivers or gig economy workers, I'm part of the problem! This is, ironically, one of the most Asian emotions imaginable: a vague all-encompassing sense of shame.

Let's teach the West how little they know about contemporary China... but, like, in a nice way? Forget the empathy machines, let's bring on the alienation machines.

I think it points to a gaping hole in existing theory on immersive media. Classic works like Janet Murray's Hamlet On The Holodeck, or the current UX orthodoxy among today's generation of XR practitioners, predict devastating consequences for immersive work that doesn't "hide the edges" and create "presence" so to speak. In games too, I've also criticized this idea of ludonarrative dissonance, that everything must cohere neatly and smoothly around the player's perspective. But all this "good taste" feels increasingly patronizing toward the post-post-modern media user who has learned to savor glitches and compression artifacts. Dissonance is immersive, empathetic, and pleasing in its own way. (In queer culture, we might call this "camp.")

Out For Delivery's sympathetic construction relies on its honesty about boundaries and limits. There's an important self-aware current of consent, where the workers speak to Yuxin on camera and joke about their international audience. There's no sleek narrator who neatly ties together all the meaning for us, because everything speaks for itself. No one pretends we're not there, but at the same time, no one pretends that our presence matters. Here, Yuxin herself has generously cited one of my blog posts as an inspiration: a short primer to Italian neorealism, and theories about how to apply those ideas to game design.

Yuxin transcends my simple ideas. There's some brilliant parts in Out For Delivery where we literally watch Yuxin the filmmaker disappear because the camera has literally left her behind. Yes our camera is still there, attached to the delivery bike, but is there still a film without a filmmaker, a game without a designer? We're there but not there, the modest presence / obliteration promised by a crowd. In the grand tradition of documentary, I think it also captures the world with a commitment to honesty, without contrivance or convenience. Everyone knows there's a fly on the wall, but we all go on living anyway.

(DISCLOSURE: Yuxin was, all too briefly, one of my students at NYU Game Center.)
at 2:41 PM
Email ThisBlogThis!Share to TwitterShare to FacebookShare to Pinterest