Ludonarrative dissonance doesn't exist because it isn't dissonant and no one cares anyway.

I complained about Bioshock Infinite before. Here, I complain some more, because I really can't get over how bad this game is. Hopefully this'll be the last complaint post. I'm sorry.

Clint Hocking famously coined "ludonarrative dissonance" to describe moments when what's happening in a single player action game doesn't fit with what the game is telling you is happening -- maybe it's just plain wrong, maybe the tone doesn't match, or maybe the game thinks this thing is more interesting than it is -- either way, it doesn't quite work.

It's when you realize your sympathetic handsome male player character is a sociopathic mass murderer, or maybe when a character in an RPG "dies" despite having already died and revived dozens of times before, or maybe the brief instance when an elite soldier NPC glitches in the middle of a doorway despite all the boring game lore dumped on you. Sometimes it's intrinsic to making a game about killing people, sometimes you hope fridge logic kicks in, and sometimes it's a technical quirk you forgive.

But I feel like that theory doesn't explain what actually happens out in the field: if Bioshock Infinite was forged entirely, purposefully, from solid ingots of 100% pure ludonarrative dissonance, why didn't this annoy the shit out of everyone? Isn't ludonarrative dissonance supposed to be jarring and horrible? Why was the unusually unified critical response to Binfinite something like, "wow this game is colossally stupid," but the mainstream response was, "this is amazing"?

So I have a new theory -- most players do not find dissonance to be dissonant, and therefore ludonarrative dissonance doesn't really exist.

In his Last of Us review, Tom Bissell calls it something else -- a "gameism" -- and he argues that learning to internalize gameisms quickly, or even nostalgizing their absence, is a fundamental step to taking on a gamer identity and truly understanding these games. These are design decisions we've quickly learned to take for granted, to ignore their blatant implausibility and incoherence. All human senses must adapt to pain. Becoming an "experienced gamer" means learning to readily resolve a game's dissonance and ignore it as a gameism, an intrinsic byproduct that We Just Have to Learn To Accept To Enjoy Man Shoot.

Some academics might call this a "lusory attitude" or make references to a semi-porous "magic circle." Or maybe it's a suspension of disbelief, or maybe you're in a flow state and you're not in a mental place to criticize. Whatever you call it, a lot of players seem pretty good at ignoring stuff that gets in the way of playing video games.

Bissell implies that gameisms are supposedly just these fringe cases that'll get ironed out by the Grand March of Game Innovation, temporary band-aids to patch the cracks between systems before Our Dear Young Medium Grows Up and surpasses Hollywood as an influential culture industry.

... I disagree that they're fringe cases. As frequent game players, we've just numbed ourselves to the more primal gameisms that form the fundamental core of AAA single player action games; the most basic assumptions and reasoning we make about player progression... they all involve heavy doses of gameisms. The contrivance is EVERYWHERE with everything we do.

Like, let's imagine you're playing a typical first person game, and there's a locked door: what do you do now? 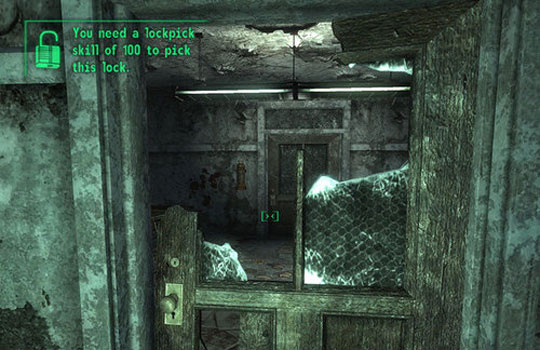 Do you remember seeing a door like this in Fallout 3? Probably not, because noticing the incoherence here does not help you level-up your character. You were probably looking for rocket launcher ammo.

Faced with a locked door, which arbitrary leap of logic are you supposed to make? Maybe encountering a locked door means you need to find a key to open it -- unless it's a post Half-Life 1 game and there's a nearby hallway or crevice to go around it -- or unless it's a fake un-unlockable locked door intended as set-dressing -- or maybe a scripted event / monster closet that broke? -- and you can tell it's a fake door because there's no 3D doorknob model there? -- but wait the door just turned red, that means we need to sprint into it to knock it down! -- oh but that door has a gold padlock on it, made of unbreakable metal? -- but since it doesn't require any lockpicks to pick it, we know it's probably a critical-path door, since the game would never put me into an unwinnable situation that required lockpicks without any to be found -- oh wait there's a crumbling wall, I can probably just stab these bricks with my knife to knock it down -- and hey, the apples in that nearby tree resemble the positions of the bricks, I have to stab the bricks in that specific order...

Game logic is frequently illogical. When is that okay and not okay? When should we do better?

I'd reckon that AAA designers, either wisely or obliviously, rarely have these existential crises. It's not just the players, but also the developers, who have to train themselves to ignore the gameisms inherent in their games. 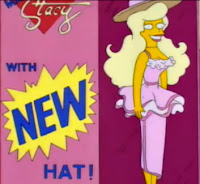 I can imagine an early design meeting where they were brainstorming different pants powers for Bioshock Infinite's scrapped multiplayer mode, balanced on an XP curve progression with custom loadouts. Then they realized they had to cut multiplayer to meet 2K's release deadlines. But what about all these different hats / shirts / pants powers they've spent months designing and tuning?

Well, let's just cram this inane magical clothes system into the single player game! That fits really well, because the player character probably wears clothes, right? And we need to give the player more choices and trade-offs, because that creates deep combat, right?

Hopefully it didn't happen like that. But what other kind of groupthink could produce thinking like this:

How about a pair of pants that lets your magical flaming crow-gun-hand haunt an enemy's gun to shoot by itself? Yes, but then should we tweak the haunt duration from 5 seconds to 7.5 seconds? 40% probability or 45%?

At any point in these design meetings, did anyone wonder whether bird-igniting pants-ghosts were even relevant, at all, in a game supposedly about fatherhood / redemption? 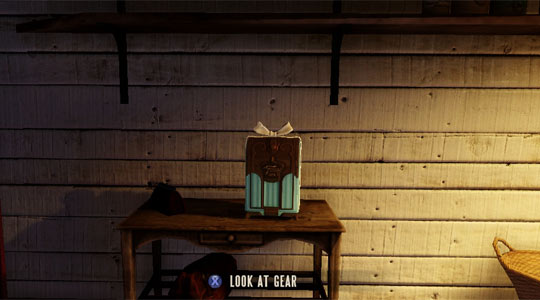 Or it's also a game about poverty too, with money routinely found in trash cans... and it's about the systemic complexity of racism, and you can solve racism in Act II by pressing Q... and let's throw some quantum science-magic in there too... also, the player should press F everywhere...

The result is a moist pile of theme-creep, a game that isn't about anything except how it isn't about anything. All attempts to read Bioshock Infinite, in any consistent way, end with, "because video games." Where some games might worry a lot about the coherence of an NPC invincible in combat, suddenly dying in a scripted event -- or maybe why a family would lock so many interior doors in their own house, and then leave town -- this game said, "Fuck it."

I suspend my disbelief for games all the time. But here, I couldn't. The most charitable thing I can say is that it put a great deal of hard work into being lazy.

... And no one notices and no one cares. The falling tree never made a sound. Clearly I don't play enough first person shooters to appreciate the tradition! Forgive me, Bissell.

Here, Gamespot puts me in my place: "[Binfinite] depicts uncomfortable, relevant themes in an effective way [...] Upgrades make you feel increasingly powerful. [...] Some annoying texture pop-in and screen tearing are the culprits mostly likely to disturb the captivation. [...] 9/10."

See? No dissonance. No confusion. It's totally straightforward.

Except for a little bit of screen tearing (-1 pt!), Bioshock Infinite is truly the Citizen Kane of video games. It is decided.

No dissonance.
at 2:29 PM
Email ThisBlogThis!Share to TwitterShare to FacebookShare to Pinterest