"Gone Home" and the mansion genre. 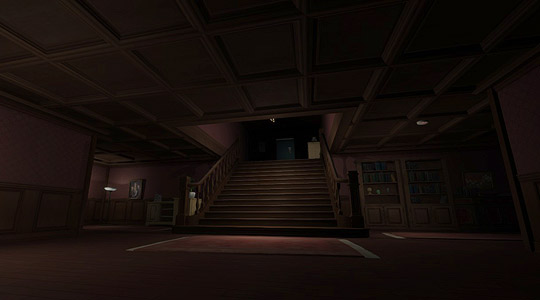 This post does not spoil any specifics of the "plot" in Gone Home, but it might sensitize you to its delivery mechanisms and some details.

A mansion means: old, rich, and scary. The most quintessential "mansion games" that emphasize these qualities might be Maniac Mansion, Thief, and Resident Evil -- these games would not work without the mansion tropes that figure prominently in their game design. Most importantly, mansions are big.

Gone Home is very aware of its place in the mansion genre, a genre that emphasizes the primacy of inventories, objects, and possessions. Here, the lightweight puzzle gating and densely hot-spotted environments evoke adventure; the first person object handling and concrete readables evoke the immersive sim; the loneliness and the shadows evoke horror. In a sense, this is a video game that was made for gamers aware of all the genre convention going on -- in particular, one moment in the library will either make you smile or wince -- but in another sense, this is also a video game made for humans. Gone Home carefully negates or omits core "gameisms" of the very genres it comes from.

The characters in Gone Home are tolerable (or even great) because they do not hesitate in doorways and stare blankly at you. It's the same trick that Dear Esther pulled: fictional characters in games develop full-bodied, nuanced personalities precisely when they're *not* constrained by fully simulated virtual bodies present in the world. (Maybe Dear Esther is actually a mansion game?) 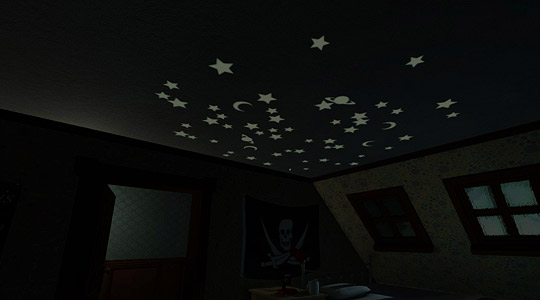 As invisible ghostly tour guides, they're able to narrate anything, anytime, without all the other problems that plague most virtual dramas: you don't have to justify how an NPC pathfound to your location, or why they react to some NPCs but not others, or what happens if you caress their face with with a box, etc. reactions that are complicated to engineer or script, and easily create narrative dissonance for many players. So, I think the main strength of this approach is that "plausibility of presence" becomes irrelevant.

The word here is "interiority" -- how we seem to have first-hand access to what the narrator thinks and feels. Everyone in this game pours out their feelings in numerous diaries and letters scattered around a house... which feels weird, but weird in the familiar way that novels are implausible, while also playing directly into the designers' hands:

Does it feel weird and implausible only because we weren't white upper middle class American teenage girls living in the mid-1990s, bombarded by a particular strain of second-wave feminism that we can no longer identify with? Is this alienation similar to the alienation she was feeling?

A lot of Gone Home might feel alien to a lot of players. Unlike most games, playing every first person shooter since Doom will not help you understand it any better because these things are real-life cultural things, not reliant on game logic.

Understanding what Reed College means, or what Riot Grrrl culture signifies, or who reads thriller paperback novels sold at airports, or what kind of person goes to Earth Wind and Fire concerts, or what a vapid postcard from a teenager in Europe sounds like... This game is less concerned (though still concerned) with ludonarrative coherence than good old fashioned narra-narrative coherence. 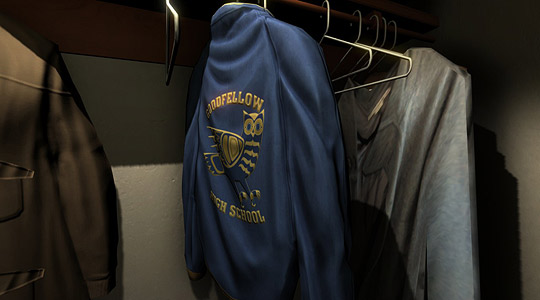 "Density" is Steve Gaynor's word for it. How much meaning are you packing into a space? But filling spaces with stuff is useless if players don't know to look for it.

In Wolfenstein 3D, there were a few player strategies for finding secrets: unusual wall decoration, numerous wall alcoves, or certain wall sections framed peculiarly by plants or lights. There was also a second deeper strategy that you might call "layout analysis": to reason where hallways went and where space remained, to remember which areas you could see into but never actually visited. If you saw treasure or health behind a column, you knew there must have been a secret push-wall to get behind there, somewhere, somehow.

Thief framed "reading the environment" in a different way: here, mansions offer probability puzzles, asking players to predict how much treasure will be in a given room (bathroom = 1% chance, bedroom = 40% chance, throne room = 100%, etc.) -- and if you enter a king's bedroom, and there's no treasure to be found, then that makes no sense -- and you better start looking for a secret button at his bedside, or a secret lever near the fireplace, or maybe douse the fire in the fireplace and look inside it.

It's about setting up patterns that players can read, and then pacing those patterns as informal puzzles. In this way, Gone Home functions much like Thief.

One bedroom might be densely packed with narrative objects and artifacts -- which makes sense, because bedrooms are culturally read in Western culture as private spaces associated closely with specific person(s). However, you wouldn't expect a small half-bathroom to be nearly as personalized, especially if it connects directly to the foyer -- that would be read as a public-facing bathroom for guests. The cultural program, imbued within your understanding of American mansion architecture, helps you play Gone Home and maybe even "solve" it.

Gone Home goes one step further though, and uses a sort of "layering" to forge connections between different objects. For instance -- if you're in a public-facing room of the house, then who owns the stuff in that room? (A lot of Gone Home pivots on this question, of who owns which spaces?) To help you figure that out, objects frequently overlap each other: something that belongs to one character might sit on top of a leaflet they picked up, which sits on top of a letter they received. It uses these spatial connections to emphasize the narrative connections between things and what they symbolize.

It's also worth pointing out that Gone Home wouldn't feel nearly as fluent if it was made with technology from 10 years ago. Sufficiently advanced physics simulation that lets you stack stuff on top of stuff? Switchable dynamic lighting that help you remember whether you explored an area before or not? Very high resolution textures for all the different readables? I think we often pretend many video games could've been made at any time in the history of game development, and we downplay the influence of graphics technology as a mindless indulgence / crime against the Great God of Gameplay.

But I think a lot of Gone Home works because of where we are in video games today, design-wise and gameplay-wise and graphics-wise. It is totally a product of its time.

DISCLOSURE: I playtested Gone Home at various stages in its development.
at 12:47 PM
Email ThisBlogThis!Share to TwitterShare to FacebookShare to Pinterest