On Non-Photorealism and Weapon Models

Ladies and dudes, I present to you: Merveilles.

This... this is definitely a game. 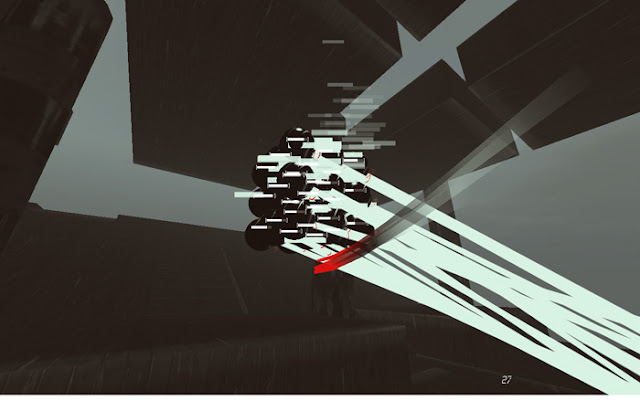 But first, a digression -- a brief rant.

In a sense, there's never been a better time to be an environment artist looking for a job in the industry -- because you'll probably find one. All these studios are dedicating themselves to the (honorable?) enterprise of photo-realism because, ostensibly, photo-realism is what sells. But photo-realism, especially in the FPS genre, is also an arms race that requires assets and assets and assets.

I mean, more recently there are games like Borderlands and World of Warcraft that leverage different looks. But for them, I think it's more of a marketing / branding strategy than anything: the screenshots and the look are pretty distinctive and won't age as horribly as a photo-realistic attempt. But both games still require assets upon assets, armies of artists painting and modeling the soda cans and plants and rocks and every single fucking thing in the world. 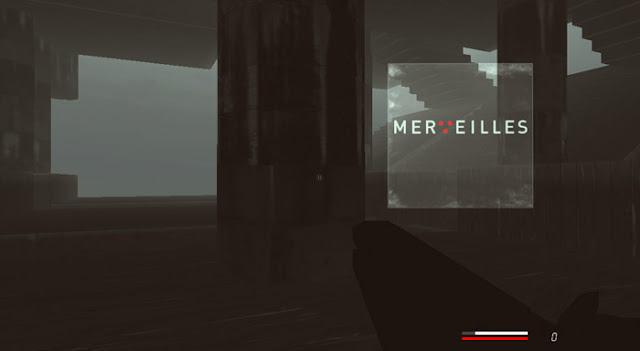 Abstraction as in being able to scribble something in MSPaint in 5 minutes and call it a character -- meanwhile, a "modern" 3D game artist will spend at least a week on a high-poly sculpt, then a low-poly model, then baking all the materials and painting the specular, gloss, ambient occlusion...

Abstraction as in the ability to directly imbue the game visuals with symbolic and figurative weight. Look at a gun in Modern Warfare 2 and you wonder whether the scope is accurately modeled or if the stock is too thick. But look at the gun in Merveilles. 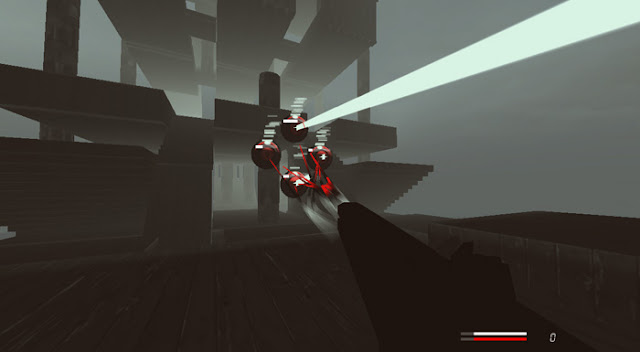 It's a flat-shaded beveled box on top of another flat-shaded beveled box with some jumble of polygons on top as a scope or iron sight or something. And it's a perfect representation of a gun: note the slight indent near the end of the barrel, the angle of the gun and the leading lines. It serves its function as a weapon model and it isn't another fucking AK-47. You don't really need a crosshair.

But now you have to ask, what gun does it represent? A shotgun? An SMG? A rocket launcher? Can I tell how powerful the gun is? How accurate it is? Is it better if weapon models are less obtrusive, just a flat shade of brown-gray? What does it mean if the gun is blending into the environment like that?

If my need to use the weapon models / character models / props of HL2 hadn't forced me to adopt a pseudo-realistic art style, I would've pursued something like this in Radiator... In fact, I did research something like this a while, but in the end I had to drop it for exactly that reason -- too much re-skinning involved in achieving a "complete" look separate from the relative photo-realism of Source. It wasn't feasible for me to do, so I didn't do it.

But part of me wishes I kept going with it. 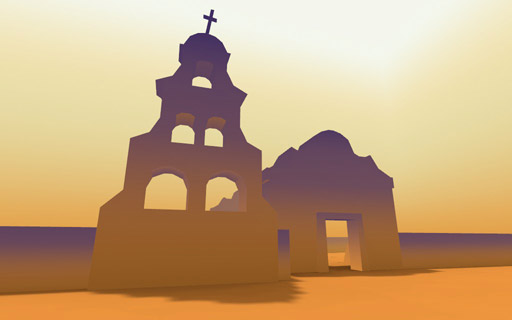 Read more about "High Noon" in another post, maybe in a few weeks.
at 5:22 AM
Email ThisBlogThis!Share to TwitterShare to FacebookShare to Pinterest