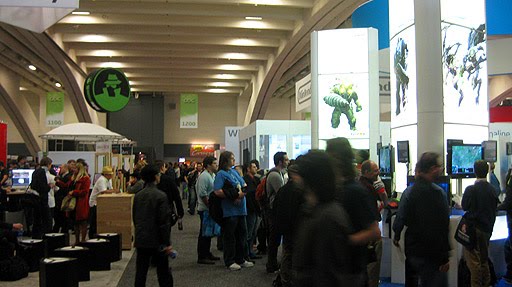 I went to GDC on Saturday with the intent to talk to some developers, show my portfolio, and get a general sense of what I need for a level design position. Here's what went down and what I thought of it:

A student pass is $75 USD and gets you onto the main expo floor. It's kind of a rip-off. I mean, if your goal is to wait in line for 20 minutes to play the newest Call of Honor or Medal of Duty or whatever, it's great...

But for me, I wanted to talk to developers at the "Career Center," a shadowy set of booths relegated to the side of the show floor... and there were maybe 5-10 studios there, at most, who were interested and willing to talk to students. The rest of it was a bunch of schools, both the reputable (Art Institute, Digipen, Guildhall) and the less reputable diploma mills (Digital Academy of Arts or whatever they call themselves). These "career enhancers" took up 60-70% of the floor. It was some lame and misleading advertising on the GDC's part to say that "40 companies" or something were gonna be there.

But still, shit went down. I visited some booths. Here's how a typical exchange goes:

... Which is fine. I expected that. With all these developers closing down, good talent getting fired, competition is only going to get worse for people trying to break-in like me. "It's a buyer's market" as they say. But I had a few interesting moments... here's how they went:

Obsidian Entertainment: really friendly guy, he looked a bit fatigued but was still being enthusiastic about meeting everyone. If they end up liking me, the only downside I've realized is that my parents live close-by. Ugh.

Insomniac Games: really friendly guy, I demo-ed "Handle with Care" for him (though the cubemaps got corrupted and so the level was a purple checkerboard mess, but he insisted he wouldn't mind) and he played it for about 5 minutes. Then we chatted a bit about it. "Interesting" came up a lot, which is either a good thing or a bad thing.

Crytek: smart and truthful, but really abrasive guy, was kind of mocking me the whole time because he thought I was really foolish to be showing him Source Engine stuff when I should be making Crysis stuff if I really want to work at Crytek. Take note -- if you're an aspiring designer and you want to work at Crytek, make Crysis mods. He didn't seem to care for anything else. Maybe he was just tired of talking to clueless people like me, okay I understand... but still, his attitude came across as presumptuous and unkind, like, "Why use any other engine? Why mod any other game? We're the best."

Bethesda: I show him my portfolio and then he says, "Okay, show me the video." Uhh I didn't have a video for that one... "Oh. Well how do I know how the level works then?" True that. Then he gives me this awful look, as if he had just stepped on me and now his boots were scuffed up. "Why are you wasting my time?" his eyes said. Maybe I should've demo-ed my mod for him, but I already got the sense he didn't really care. Lesson learned.

Blizzard Entertainment: After two strikes at Crytek and Bethesda, I realized my Source mod portfolio was even less targeted towards Blizzard. They were probably just going to tell me the same thing, that I should've made some Warcraft mods or something. Plus, the line was really long.

So I didn't bother. Instead, I followed my instincts and went to see...

Valve. But I think that's going to have to be its own separate blog post. 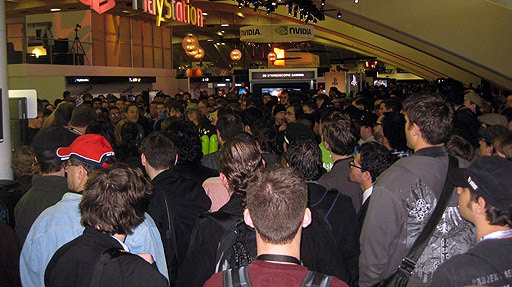 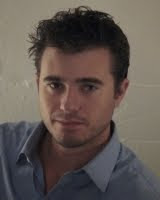 PS: Hours before, I'm reading about the IGF award winners over at TIGSource... Then at the IGF booths I see Andy Schatz (the guy behind IGF winner "Monaco") who's gotta be the most attractive indie game developer I've ever seen -- strong jaw-line, classic nose, high cheek-bones... Lordy, those cheek bones!

... Anyway, I see him. He makes eye contact and gives me a head nod. I'm star-struck. And then I feel embarrassed for feeling star-struck because there's (at most) a few hundred people in the entire world who would recognize him. But it's a strange feeling, seeing someone's picture on the internet and then recognizing them a few hours later. It's like the first time you visit the Eiffel Tower -- a mental double-take, "Wait, this thing I've seen in pictures... It's real?!"
at 9:32 PM
Email ThisBlogThis!Share to TwitterShare to FacebookShare to Pinterest