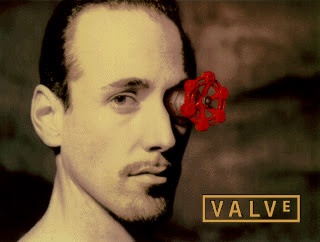 This is part 2 of my adventures in job-hunting at GDC 2010. Last time, I was disappointed by the small number of actual studios in the GDC "Career Zone." I had some okay encounters and some pretty embarrassing cringe-inducing encounters.

And then I went to see Valve.

They weren't in the dimly lit, half-abandoned "Career Zone" ghetto with all the other booths. They were a 4 minute walk to the complete opposite side of the show floor in the quiet, austere, and intimidatingly ambiguously named "Business Area." (What kind of business?!)

This part of the floor was profoundly deserted and I felt like some sort of trespasser, but then I checked for my balls (yeah, still there) and decided that someone would yell at me if I wasn't supposed to be there. Then I saw it -- in the center of the maze was the "Steam-plex," complete with interview rooms and a lounge and a reception and food table and whoaaaa. It was more than a booth -- it was a mobile office, an outpost, a citadel. I wish I thought to take a picture.

I didn't expect to get anywhere, given my dismal results talking with Crytek and Bethesda. I prepared myself for blank, vacant stares followed by me hastily leaving a CV on the desk, apologetically bowing for wasting their time, and then promptly running out to the front of the nearest speeding bus to kill myself.

The man at the front ("Charlie Brown" -- the bestest name ever, though I'm sure he gets that a lot) seems surprised to see me. He hands me a form. I fill it out and hand it back to him. That's when he says, "Oh, there's Robin. Looks like he's finishing up right about now... you can go with him."

And then I'm sitting at a table with the lead designer of Team Fortress 2.

Then I'm watching him play Radiator 1-2, Handle with Care. I (foolishly?) name-drop a bit frantically as he plays -- "Rock Paper Shotgun this, Adam Foster that, Marc Laidlaw said this" -- but he doesn't mind, he chuckles and takes it all in stride. There's no mocking here, no presumption, no (well-deserved) arrogance. He's just being such a class act right now that I'm perplexed as to how comfortable I am, chuckling along with him. He's clearly not one of the Old Gods who demands sacrifice.

I went in somewhat confident about my mod: I've prototyped it, playtested it, revised it, and people generally seemed to like it. Every time he chuckles at something I designed to be funny, it takes all my willpower not to scream like a 12 year old girl at a Jonas Brothers concert.

Apparently whenever Robin Walker playtests something, he narrates his session in this strangely hypnotic steam-of-consciousness mode that sounds something like this -- "there's a crate in my way so I can't read the coordinates on the walls and I don't know where I'm supposed to put this but now I don't want to put the crate down because then I'm scared it will break but I can't see where I'm going and now I can't decide whether to..."

... and it's amazing because that's totally an obvious design flaw that I would've never caught just by watching someone. When he verbalizes his process of playing, it's like... Whoa. That's totally what a player would think, and he's totally right -- it's nonproductive frustration in this case. (As opposed to productive frustration, when you try to jump and throw a crate onto a shelf only for it to fall backwards onto you and explode -- and now you know that strategy doesn't work.)

In-game, a crate falls down from a shelf and explodes. "Stupid finicky Source Engine physics!" he quips with a winning smirk. (Me, internal monologue: "MARRY ME RIGHT NOW.")

He continues, "... but now as a player I feel like I have to break nine crates that leaves me with one live left so I can see the maximum amount of content and I don't miss anything and then from there I will just quick save and quick load over and over and the volume is too low on that line I couldn't hear what she was saying and now that I've broken a crate I expect the dialogue on-screen to change but now it doesn't so I'm kind of disappointed and..."

I look outside -- the rest of the Steam-plex is deserted. It's just me... It's just me, holding up at least half a dozen Valve staff members from returning to their Very Important Work... And they're all standing there, next to the front desk, shooting me blank, vacant stares.

Robin Walker gives me some last minute advice -- namely to balance my portfolio out more, because Valve probably isn't going to make a gay marriage therapy game anytime soon -- then shakes my hand and apologizes for cutting the conversation short. (Me, internal monologue: "Oh mercy me, Mr. Walker! You, sir, have nothing to apologize for, I do declare!!" [swoon])

I realize it's meaninglessly common to adore Valve -- if you like playing video games at all, you like Valve, it goes without saying -- but those 25 minutes have solidified their reputation in my mind. Without hesitation, he sat down with me for a pretty long time and earnestly critiqued my work. No one else did.

So, I'm impressed, to say the least.

... By the way, I'm never washing my hand again. Maybe some of the oils from Robin Walker's hand got onto mine, and now I'll have a fraction of his talent and my levels will design themselves. He should bottle it and sell it: "Secretions. By Robin Walker."

at 3:32 AM
Email ThisBlogThis!Share to TwitterShare to FacebookShare to Pinterest