A Decision of Wasted Opportunity 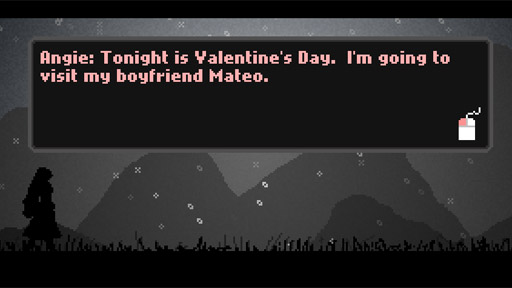 Via Play This Thing comes "A Decision of Paramount Importance" by Thomas Lui. (WARNING: Some spoilers await, take 5 minutes to play it first...)

Patrick Dugan at Play This Thing already sums up some of the better features of the game -- it plays on a cool adventure game trope, the timer adds a nice touch of urgency and the art style / choice of middleware was smart. The primary weakness is how much of a binary it is, and how unrealistic the game is -- presumably the real-life situation would be much grayer than "oh my god what are all these beer cans and drugs doing here."

However, where I think this game really goes wrong is the player character.

You're ______, some randomized name / vulnerable female teenager. You go around this guy's house and snoop around all his things. You go through his mail, you go through his desk, you look through his books, under his bed... What the hell is wrong with you?

I was hoping the game would use this and have your boyfriend break up with you for snooping around all his things, not trusting him, and generally being a nuisance. It also would've been a somewhat humorous meta-commentary on how basically every adventure game player character has OCD, picking up everything and using everything in their pockets on everything else.

But I guess "somewhat humorous" might be an inappropriate tone both for the audience (parents / educators probably not well-versed in video games) and the theme (teen-dating violence = hilarious?!)

Don't get me wrong, I think this is probably among the better educational games out there, but it could've been so much more powerful if it wasn't so obvious about everything, and I think the twist with the player character would've had much more impact than something so obviously didactic and predictable.
at 10:00 AM
Email ThisBlogThis!Share to TwitterShare to FacebookShare to Pinterest