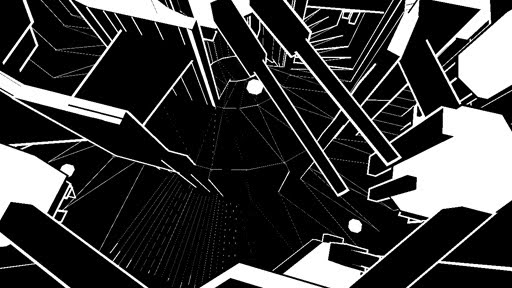 Demon Pigs Go Hog Wild, by Charon, is an extremely difficult-to-find anomaly from the competition. (Fortunately I've tracked it down for you.) It seems like the community spontaneously forgot about it upon its release and it never really garnered much play -- which makes sense, as it's calculated to be utterly disorienting, using only 2 colors to create a strobe-like effect as you move through the level. (EDIT: I'm told Fileplanet is shutting down, so I'm mirroring the ZIP on Dropbox.)

It was an experiment more than anything, using the new cel-shader functionality that Randy "ydnar" Reddig (fun fact: he also worked on Marathon Infinity and designed an Adam Foster-esque easter egg for it) implemented in the Quake 3 level compiler tools Q3Map2.

The result is an aesthetic that emphasizes the rhythm of lines and silhouettes, and serves as one of the earliest (and probably best executed) uses of a cel-shading style in an FPS. Charon only used two colors, and yet his level is still pretty readable: you can discern walls, floors -- the ribbing on a recessed wall indicates a jump-pad at its feet -- and the bold white chunks of wall serve as potent landmarks. Exposing the net of triangle mesh along the floor and walls was also an inspired touch; a lesser designer (like me, maybe) would've painted a black and white tile texture or something instead.

Of course, it's still pretty unplayable... BUT. Looking back, it's understandable why there was a brief period of experimentation in this direction. It was the promise of something new...

While cel-shading existed as an NPR (nonphotorealistic rendering) technique before 2000, it only gained real currency when Sega released Jet Set Radio on the Dreamcast. (Or at least that's how me and a lot of other gamers felt.) It immediately became a cult classic and even merited a (mediocre) sequel. It took about a year or two for this style to migrate over to a FPS modding community that craved something other than the photorealistic aesthetics of the Quake and Unreal engine games.

Over in the Half-Life 1 level design scene (specifically at the Snarkpit) some modders and I tried a few experiments with similar NPR styles: 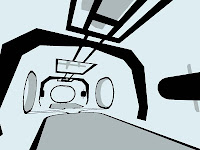 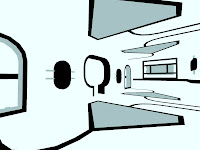 (above: Pulse for HL1DM, by Adam Hawkins. It's like walking through a flowchart.)

(above: Flatshaded for HL1DM, by Duncan "ReNo" Blair. Inspired by Wind Waker, from what I remember.)

(above: Cactus, by Robert "Campaignjunkie" Yang, lost in a hard drive explosion.) 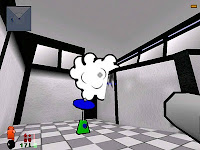 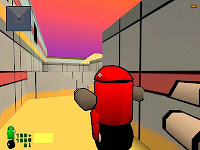 (above: BuzzyBots, an HL1 multiplayer mod that had an okay-sized player base but kind of died soon after.)

Then there was an Unreal-powered game based on a French comic about government conspiracies and stuff -- "XIII" (2003) used the cel-shading aesthetic in a way that was... well, kind of obvious. The main innovation here wasn't so much the visual style as the consequences of the visual style: onomatopoeic "tap tap tap" sprites you can see through the wall when a guard walks by, the "bang" of a gun in 48 point font, the split-frame "24"-style rendering for certain flourishes and cutscenes, etc. 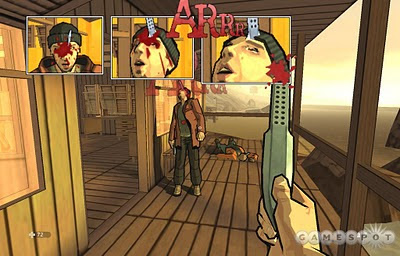 Yet I'd argue that Charon's early use of cel-shading in DPGHW was still more innovative, not borrowing explicitly from a comic trope but creating something less identifiable or categorical in an FPS setting. Players weren't sure what it was trying to do -- which is why they didn't play it and Google barely knows what it is -- but it was bold in how it used value to define spaces the way it did.

(Note: I'm omitting the countless Dragonball Z and Naruto mods that had / still have great player bases on FPS engines, but in terms of game mechanics, weren't FPSs and only sought to emulate the visuals of the IP they were based on.)

Anyway. Interest in this kind of NPR for the FPS genre sharply declined after this brief spurt of 2002 / 2003 in both the game industry and amateur modding community. Years passed. Then, we got some games like Borderlands that picked up the style again (I don't count Killer7 because it's a rail shooter, and let's just forget Red Steel 2 happened) -- except I can't help but feel that the experimental spirit is gone.

But really, why should we grieve for something that wasn't that great in the first place?

I guess we shouldn't.
at 2:43 PM
Email ThisBlogThis!Share to TwitterShare to FacebookShare to Pinterest