Introduction to Starcraft and Heidegger (Part 1) 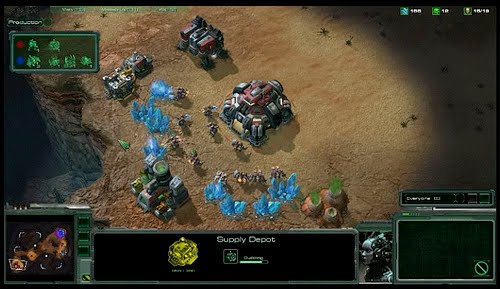 (This is a two-part essay on Starcraft II, why it is great, and its relation to Heidegger's writings on technology using Sirlin's excellent write-ups for a Starcraft class. It is aimed towards relative novices who don't really play Starcraft multiplayer.)

So one day, I was playing Starcraft II against some dude. We were both Protoss... and it wasn't going well for me.

He had all these "Stalker" spider-robot-things that shoot ranged lasers / can teleport short distances instantaneously. It was kind of hopeless for me: he shoots lasers at me, I run towards, he "blinks" away -- repeat.

This is micromanagement -- high-frequency, repetitive actions that require a high APM (actions per minute) to maximize a unit's flux, or ability to inflict damage.

In doing so, he was also kiting (as in, a kite) my units away from my base, as his Stalkers teleport further and further away and my army chases after them. It leaves my base utterly defenseless. He has a second army waiting. They charge up the ramp to my base...

This is, I think, the mainstream understanding of Starcraft II; one that privileges reflex-oriented tests of micromanagement. Not to say micromanagement isn't important -- it can be very important.

The more damage you can evenly distribute among your army, the more units you can keep alive to deal damage -- the more units end up surviving, the larger your standing army, etc.

In the video above, a bot for Starcraft 1 has been programmed to move dragoons away when the unit is about to die. The difference is astounding: the distribution of damage allows one army (of two identical armies) to emerge practically intact.

Once again, this is micromanagement in order to maximize flux, the ability of the dragoons to deal damage. It is relatively easy for a computer, but it is difficult for a human to hone that kind of concentration and dexterity.

Again, this is the type of work that computers can do well, but humans must train to do it. We'll come back to that in part two. 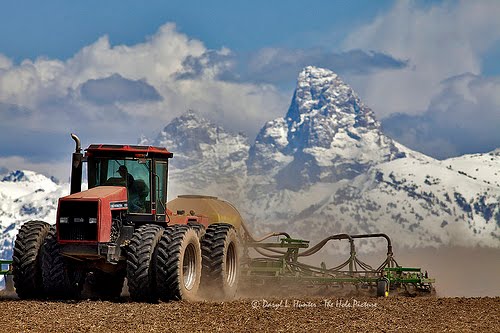 Now, when we think of technology, we usually think of it as an instrument / tool that does work for us. In "doing" something, technology causes something to happen; but first, technology has to be constructed out of something.

In his obtuse and mostly unreadable essay "The Question Concerning Technology," Heidegger argues that technology is about harnessing raw resources; windmills harness wind, power plants harness... let's say coal. (For this post, I'll be summarizing from a summary.)

However, the difference is that windmills don't extract anything from the wind, while we think of a power plant as creating a standing reserve of electricity while using a "standing reserve" of coal as fuel.

This is what modern technology does, as opposed to the previous technology -- we re-orient our perspective as to what coal means, turning it into an energy source, when really we have no control over it; nature produces the coal at its own pace. The standing reserve is an illusion, a product constructed from our minds.

When we create such illusions of a standing reserve for ourselves, we are enframing ourselves, trapping us in our conception of reality, unable to see what technology really is -- the original raw resources before we "processed" them. 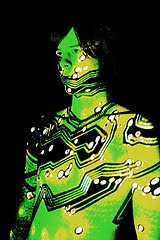 We're even enframing human beings in this paradigm, as with "human resources." A cashier at McDonalds has to wait for an order before they can do their job; in this way, a person has become a standing reserve, waiting (as a parked car does) for the call to do work.

Heidegger thinks this is really really bad, not because technology will enslave us but because we'll think ourselves gods, able to control humans and all existence, seeing ourselves reflected in everything, unable to see what's really going on -- unable to remember the raw resources that made technology possible in the first place. (In this sense, Heidegger's thinking is kind of ecological / green.)

Well, that's exactly what happens in my game of Starcraft. My opponent has two huge armies, one destroying my army and the other marching on my base... but my opponent loses track of what's really going on here. He has enframed himself.

And I end up winning.
at 8:05 PM
Email ThisBlogThis!Share to TwitterShare to FacebookShare to Pinterest