GeoComp2: Neorganic Epiphany, by Dubblilan + notes on CQB and "slicing the pie" 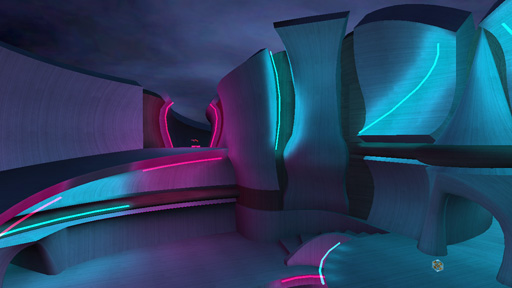 Neorganic Epiphany, by Dubbilan, is blobitecture / "parametricism" with a "Miami Vice" sensibility. The floorplan isn't what makes this level special -- it's a decent central arena plan with a handful of small side atria that feed back into the middle. But the style does make one rather important difference in gameplay...

See, most arcade DM maps -- especially those in the BSP era -- are rather blocky, due to the nature of BSP construction. It's easier to manipulate rectangular shapes than curved, slanted shapes. This is mirrored in real-life construction practice with four-cornered rooms and long, straight planes for walls that meet other walls at 90 degree corners... 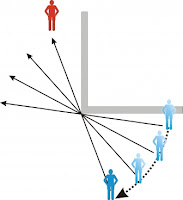 SWAT teams in urban CQB contexts use a movement technique called "slicing the pie" (image to the left stolen from that link) to maximize coverage and minimize risk to the assault team. The idea is that you use the corner as a "pivot point" for your line of fire. FPS players use this technique all the time, albeit on a more subconscious level, perhaps.

Line of sight is essentially important in high-octane arcade contexts, like Quake 3, because your opponent likely has her railgun aimed at head-height as they slice the pie.

On Neorganic Epiphany (and, to a lesser extent, some of the curvier Covenant-themed levels in Halo multiplayer too) this technique is much more difficult to use because there's no "corner" to pivot on. Perhaps this explains why a lot of players liked this map for rail-only servers -- longer sight-lines, more danger, a sort of balance between a corridor-crawl and a space floater.

And again, in an age of desaturated brown FPS's, here's one that utterly thrives on the use of color. Seriously -- magenta! When was the last time you saw magenta in a big budget commercial FPS that wasn't Halo?
at 5:00 PM
Email ThisBlogThis!Share to TwitterShare to FacebookShare to Pinterest