Walking through French farms and wandering Parisian streets has been somewhat unreal because merde, I've been here before... even though I haven't. Among all the Omaha Beaches, the Caens, and the Parises I've visited, the layout has been new and foreign, but the architectural language and landscapes are always familiar. It's the same place but it's also not.

Sure, we've all visited countless virtual New Yorks and Londons and Iraqs too, but France is different.

France, as depicted in military shooters, has always been the battlefield of stone farmhouses, green fields, medieval towns, cathedrals -- and it's up to the Americans to sprint up the beach and save this poor bleeding land. It's surprising, then, to discover that France's France is not a smoldering ruin covered in grass sprites. 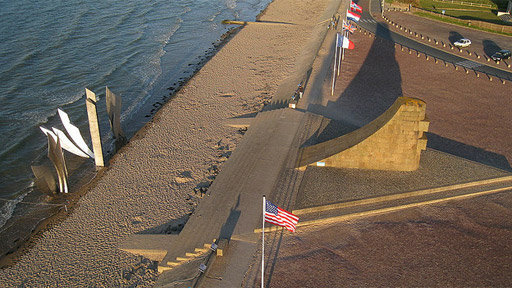 Most tourists don't say anything critical out of reverence, but the French have chosen to mar their version of Omaha Beach with a really awful metal sculpture that permanently scars the shore and ruins the subtle relationship between the original landing monument and the land.

The original monument? A foot / boot that follows the curve of the shore and the cliffs, made of stone stained in the same hue as the earth around it. A strong but simple silhouette. A fantastic piece.

Then some meters toward the water, there's the much newer, much less attractive steel eyesore that actually obstructs a direct path from the shore to the stone boot. It's just there, stuck in the sand, like another German beach obstacle that exists solely to be in the way. Well, it's supposed to evoke flames to symbolize youth or something, but its odd height leaves it just barely over human scale yet much shorter than a monumental scale -- so it's a monument that requires a nearby plaque, poorly typeset, to explain itself and give it the monumentality that it still doesn't have and will never have.

Clearly the "real world" has failed Omaha Beach. It's up to video games to give it space. 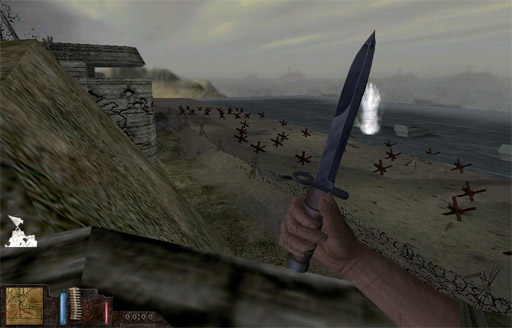 The first, most prominent Omaha in my mind is Day of Defeat's dod_dog1.

The Goldsrc (Half-Life 1) engine that powered Day of Defeat, largely descended from the Quake 1 codebase, was ill-suited for large landscapes. Things look far in real-life partly because of the atmosphere between you and the horizon -- things lose color and bleed together into silhouettes -- however, the lack of fog really hurt any Goldsrc powered attempts at depicting long distances, especially for a notoriously foggy place like the coast of Normandy.

Or maybe the glaring absence of fog didn't really matter anyway because Goldsrc maps were so small anyway, constrained to +/- 4096 units, about 1/10 of a square mile. (While there were tricks to get faux 3D skyboxes in Half-Life 1 without any custom code, the technique only saw any real use in Merkaba's late chef-d'oeuvre, ns_machina.)

So, dod_dog1 utterly fails in depicting the space of Normandy because the engine simply wouldn't allow it. Indeed, if you should ever visit France's dog1, you'll notice how much taller those cliffs are and how much longer the shore is. The mind boggles. But what was it like? Well, that's where dod_dog1 succeeds, even without space. 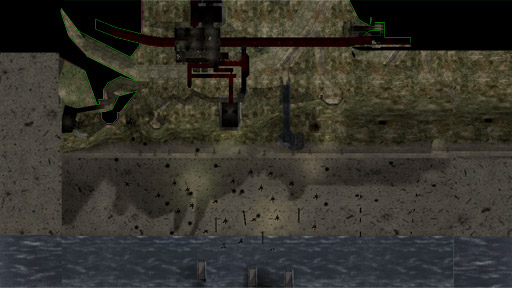 Here's what usually happened to most first-time Allied players on dod_dog1:

The first time you spawn, you will die instantly from mortar fire. The second time, you might last a few seconds before a German sniper kills you. The third time, you go prone behind a hedgehog but a sniper will get you again. The fourth time? You immediately sprint for your life, to the foot of the bluffs -- and finally survive longer than a few seconds. Thus, moreso than any other DoD map or beach map, dod_dog1 taught me that war is arbitrary and unbalanced. dod_dog1 taught me that war isn't fair.

In return, dod_dog1 got removed from the official map rotation because it exceeded the maximum texture memory limit for maps... and, well, certain enterprising Allied players could "hide" underneath the opaque surface of Goldsrc water to safely snipe Germans. The original designer was missing in action, the map couldn't get fixed, and so it was left behind in the next patch. It's not fair. 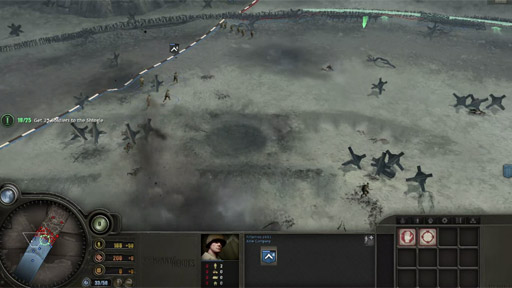 I found Company of Heroes' Omaha to be the worst Omaha I've visited. It's the first mission of the campaign, which means it's designed to be a simple tutorial mission that teaches you the basic mechanics of moving squads and flanking emplacements; it suggests Omaha was a cake walk where Eisenhower learned how to select units at great human cost. 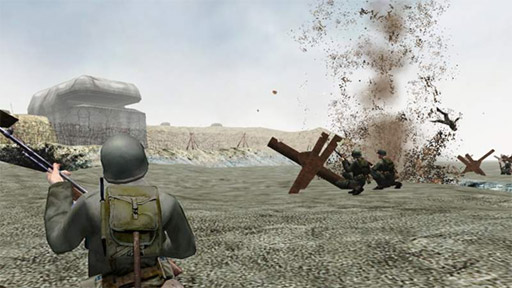 In contrast, Medal of Honor: Allied Assault put their Omaha after two chapters' worth of missions about stage-setting espionage, which is a much better pacing decision. It means they're not teaching you to use WASD as you land on the beach.

However, MoHAA tries too hard to make Omaha an oppressive and difficult place, transforming a 40 km stretch of beach into a branching corridor with laser beams sweeping across the floor; it seems arbitrarily difficult, essentially the laziest and worst form of first person platforming, evoking the instadeath timing puzzles in the worst parts of Daikatana. There's no intent to the firing arcs of the beachhead machine guns that will mutilate you at every turn, they simply sweep around in patterns. After a while you realized the machine gun isn't an enemy you can outsmart, it's just another environmental obstacle that requires trial and error rather than tactics.

Call of Duty 2: Big Red One has, by far, the most creative Omaha.

You start in a boat, spotting artillery targets with some binoculars. (I'm not sure if that really happened, but it's plausible enough in the fiction.) Then, as your boat approaches the shore, you black out. You wake up momentarily as an NPC pulls you into another boat... then you black out again. As you sit in the boat, some nearby soldiers get shot -- and you black out for the third time in the last minute! (You have fragile nerves, ill-suited for warfare, it seems.)

Finally, you get up off your back and begin the level proper -- but you're already, conveniently, standing at the foot of the cliff, and you just need to follow the shoreline to your next objectives, sprinting and shooting some nearby Germans with your magical waterproof Garand or Thompson or whatever. 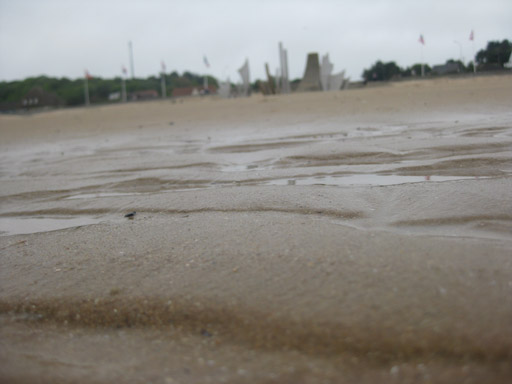 Day of Defeat, Company of Heroes, and Allied Assault each wrung their hands over how to make a hopeless beach assault somewhat authentic yet compelling, arduous yet facilitated, long but short.

It's a brave decision that would've been braver yet if they simply just used jump cuts instead of implying you lost consciousness on three separate occasions in half a minute, but video games have historically been pretty conservative in what film techniques they use because gamers are supposedly too stupid to understand. (Baby steps!) However, the idea of cutting the player's experience of continuity and skipping to the action is innovative enough, especially for a Call of Duty entry farmed out to Treyarch.

I guess I've put myself in the position of declaring that one of the better versions of Omaha Beach has involved omitting the beach.

If only France could just follow suit and cut out that stupid fucking metal sculpture.

at 5:59 PM
Email ThisBlogThis!Share to TwitterShare to FacebookShare to Pinterest