I don't normally theme these posts around anything, but these three indie FPS experiments share so much DNA that it's impossible to ignore. They're all very grounded in digital / virtual / "futuristic" aesthetics, but they're confident to sometimes let that futurism be incredibly alien. Also, I'd hazard a guess that few of these designers have worked on many FPS games in the AAA manshoot tradition, but these "outsiders" are the future of the FPS.

(Coincidental but shameless plug: if you pick up a recent issue of PC Gamer UK, there's a "Future of the FPS" feature I wrote, though I guess it's already inaccurate now, seeing as I've neglected two of these beauties...) 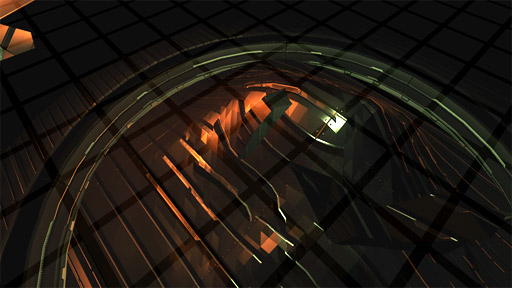 Descriptions offered so far seem intentionally cryptic and foggy -- a multiplayer co-op wandering survival sim (?!) with an emphasis on atmosphere over gameplay, set in a stark Mordor-Tron world, with a little help from Structure Synth. What grabs me most is how the forms are so mechanical yet still incredibly abstract and inscrutable. You always see generic sci-fi corridors with gubbins and doodads embedded in the walls, and they're always encoded as "electrical panel" or "fuel pipes" or something. They're obsessed with being knowable because supposedly that's good design; I think Dirac shows how nice just a shape can be. (Unfortunately I missed the last multiplayer playtest, but there's another open test coming up on May 20th at 8 PM EST, just meet in #merveilles IRC on esper.net. Check the TIGSource thread for the most recent schedule.)

Memory of a Broken Dimension, by "XRA" Based on some of the technical notes about using a vertex shader to transform polys / storing positional data in the vertex colors at the cost of some precision, I'd guess this game's going to feature swarms of fragments / a world disintegrating and flowing around you, along with what looks like weapons-grade refraction and motion blur. Post-processing is really hard to use well, but I think XRA has a pretty novel glitch aesthetic going on. And for some reason, it's all rather unsettling. I love it. 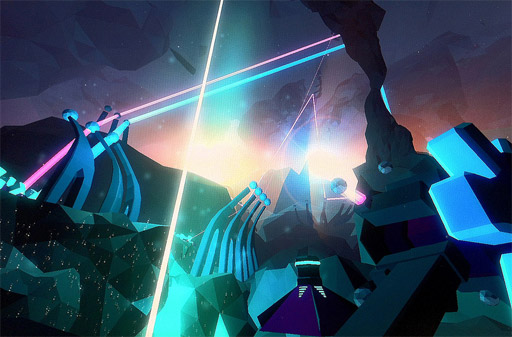 With the recent addition of certified superhuman boy genius Aliceffekt, FRACT has gotten a lot more atmospheric: more glow, more nebulae, more fog. Probably among the best, most subtle uses of fog I've seen in a game, in fact. While Dirac and Memory want to be mindfucks, FRACT wants to be a bit more welcoming. The landscape and interfaces are alien, yes, but still recognizably landscape and interface. Here, a door is a door. It probably won't fragment into a thousand triangles and swarm at you, or morph into some crazy chain of fractals. Although...
at 9:00 AM
Email ThisBlogThis!Share to TwitterShare to FacebookShare to Pinterest