Dishonored fails as an immersive sim within its first minute. 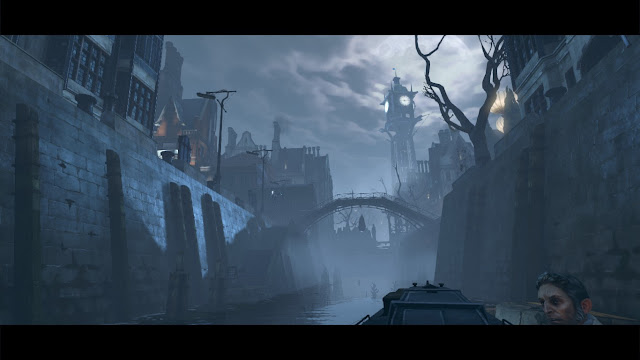 This post DOES NOT spoil Dishonored's plot, but it DOES spoil a little bit about how Dishonored's branching narrative works.

I'm being dramatic here; Dishonored is pretty well-designed and gorgeous and I enjoyed myself. I liked Dishonored, on the whole. However, I couldn't help but notice that Dishonored, taken as the immersive sim it keeps insisting it is, fails within its first minute under that tradition. It fails upon giving you your first choice:

Do you want to play the tutorial or not?

The tutorial involves a creepy little girl begging you to play hide and seek with her, to teach you the basics of its cover-based hiding system. So she squeals with delight, closes her eyes, and then counts to ten, prompting you to hide. Now, the first thing I did was to run away, as far as possible away from her, which is actually an important strategy throughout the game: if a guard NPC is looking for you, then you can always run away, and the guard will give up the search but remember seeing you before and be slightly more alert.

I also thought I was being funny and creative, as a player, by being a petty jerk to this little girl, leaving her to search fruitlessly for me while I went home to snack on some pizza rolls.

But what happens when you run away from the girl?

The game throws up some menacing text, "you are leaving the hide and seek zone," (ah, yes, that zone) then plays an ominous sound and tells you that you've "failed" the objective. Then the little girl immediately advances to her post-tutorial scripted dialogue and acts as if nothing really happened. The game basically hates you for trying that.

This is (a) inconsistent within the dogma of immersive sims, and (b) a huge missed opportunity.

Me and a whole lot of other people argue that the "immersive" in "immersive sim" refers to the scope of the simulation, especially where the abstraction of mechanics and narrative work together. It is immersive in the sense of all-encompassing, system-wide consistency. In System Shock 2, you earn "cybermodule" points to upgrade your character abilities -- but if you defy an NPC at one point, she will take back the upgrades she bestowed on you because you pissed her off, which makes sense and is pleasantly surprising because the game narrative commodified upgrade points like that. In BioShock, the NPCs have weapons, abilities, and spells that function much like yours, implying that you're slowly becoming a monster just like them.


Under these design principles, the little girl should behave like the other guard NPCs who look for you. She should have a knowledge model based on what she has seen and heard. If she cannot see you, then she must assume you're still possibly nearby, and must keep looking for X amount of seconds, until she gives up. If the game is trying to teach you that running away isn't allowed, it succeeds.

Instead, the game shouts at you with tightly kerned capital letters if you dare to assume she's like any other NPC. It punishes you for assuming consistency within the simulation. Dishonored is well-aware of its crime because the rest of the game is remarkably consistent in this sense (you can sneak-up on virtually anyone and choke them to death, you can teleport and climb to most places you think can teleport and climb) which is why I'm offended more by its other crime, of missed opportunity. 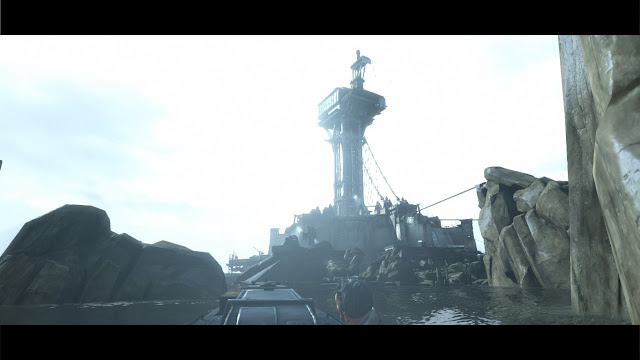 If I had to distill some sort of message from Dishonored, it would be "don't be an asshole." The game decides whether you're an asshole in two ways: (i) the overall amount of NPCs you've saved / killed during missions, (ii) your choices during a dozen or so narrative setpieces / cutscenes.

(ii) is really boring. You just click on buttons in a dialogue menu while the game is paused, and the choices boil down to "save the orphanage (non-lethal)" or "torture the puppies, then burn them alive." I'm sure it took an army of writers and animators several months to build each scene, and they're well-crafted, but still boring.

(i) is fascinating to think about, and uses the native interactions of the FPS rather than a convenient option menu. Like, if you shot a guard on a balcony with a tranquilizer, but then they collapsed on the railing and fell over the edge to their death, are you responsible or was it an "accident"? There is an entire TV drama industry focused on the blurry distinction between manslaughter and murder, and tracing your agency in a game that's supposedly about the morality of assassination is compelling. However, you quickly realize this is just in your head, that the game doesn't acknowledge these shades of gray at all, which is okay. Maybe that's too hard of a design problem to solve.

... with an easily impressionable NPC who cares a lot about what you do and ties your actions directly to her reactions,

... all while creatively playing with the stale frame of a patronizing multiplatform FPS tutorial and allowing the player to feel clever,

... all without the contrivance of a cumbersome dialogue menu to register the player's intent, but still make a powerful first impression on the player regarding the scope of the narrative simulation,

... yet it'd just take 5 minutes of scripting and an extra line of voice over to implement it all,

... and then Dishonored didn't do it?

I was a little disappointed, especially since it was my first interaction of the game. Of course, the game does many great things after this part -- but, still, I found this disappointing.

(For more writing on immersive sims, check out the "Dark Past" series, mainly on Thief games as immersive sims.)
at 9:00 AM
Email ThisBlogThis!Share to TwitterShare to FacebookShare to Pinterest