Why Frog Fractions is one of the best games of 2012. 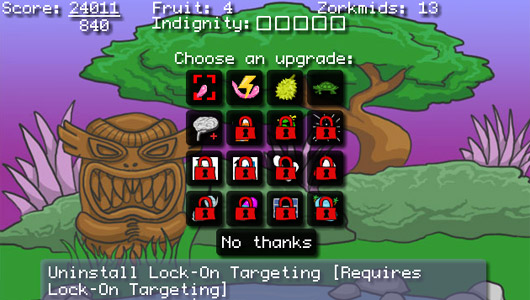 My SPOILER-y thoughts are after the jump.

There's been a revolt -- or a strawman of a revolt -- against nostalgia in the indie game community for a while. "Stop making platformers, quit it with the pixel art, chiptune music is over, etc."

However, this nostalgia is more specific than "weren't those genres fun / great / kooky?"... Frog Fractions is nostalgic for the mismatched discourse / metaphors of the edutainment genre. Killing bugs has nothing to do with fractions, but developers just thought cartoon animals would make the material more appealing. Neither does DDR have anything to do with how elections work. And it suggests the bug president's job is to print "megabytes" of pornography, and inflate the currency when you overproduce pornography at a loss... anyway I shouldn't have to explain why this game is funny, and that's why it works so well -- because it doesn't work. In fact, it doesn't just fail to work, it fails to work then crashes a car that careens into a volcano that destroys a planet. It fails spectacularly in a well-crafted and intuitive way.

Also, I'm pretty sure all the segments / mini-games are rigged for you to win.

Frog Fractions is not nostalgic for bad educational games of the early 90s. Rather, Frog Fractions is nostalgic for absurdity in games, at a time when game design schools and developer communities are so focused on congealing design into a teachable discipline / coherent culture, when we think designing something to death is necessarily good design.

Frog Fractions has more in common with Tokyo Jungle than Math Blaster. The actual game and mechanics are just a means to exploring the absurdity of the premise.

If something like Spec Ops: The Line is full of self-loathing, and Gears of War is totally oblivious and lacks self-awareness, then Frog Fractions knows it's the butt of a joke.

But it also knows it's the life of the party, as it dances on the table with a lampshade on its head. It's more important to have a good time than to "worry about the future of the medium."