This post discusses my game Succulent and it completely spoils the ending, if you care about stuff like that. You should probably play it first.

There's a few scenes in the film Inherent Vice where you watch a man eat a frozen banana. They were unusually entertaining and not at all arousing, which got me thinking -- what if I made a game where you just watch a dude stick stuff in his mouth?

So for Succulent, I've put a fair amount of work into making this interaction feel "juicy", hooking it into particles, sounds, facial animations and "cheek physics"... here, the physicality of having his own arm do it, instead of a floating disembodied invisible player hand, was crucial to establish that he was doing it for himself and enjoying it. Inverse kinematics was finally good for something! 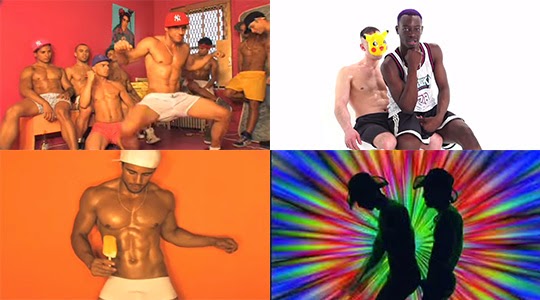 Of the two, Le1f is more complex (and arguably a much better musician), throwing down an amazing catchy beat while critiquing his relationship with art and calling out racism. So I felt like I had to do at least a little bit more than create a vehicle for ogling things down throats. As with its sister game Hurt Me Plenty, this game had to be more than one note -- ideally one and a half notes or something. What would that half note be?

Christine Love suggested a sexy "peering over glasses" look -- at first I was reluctant, because I gave the NPCs these sunglasses specifically to hide their lifeless eyes and to try to avoid the uncanny valley... But then why shouldn't this be a little creepy, the idea of gay men fitting into this homogeneous skin color and body type and hair cut, of endless copies?

In the 70s, they called them "Castro clones", after all the gay men in San Francisco's Castro district who dressed alike and still mostly do. This is an ideology my recent gay games have been replicating through their heavy asset reuse of the sole character mesh I commissioned; an emphasis on certain masculine bodies to model for the entirety of a community. You sadly get used to this, as a gay man of color -- the vast majority of gay men depicted in media are white and masculine, and if you don't fit in then you get erased within your own community. How can this possibly be the "liberation" we were promised? For many queer-identifying men, this monoculture feels stifling and we feel compelled to try to escape and seek alternate spaces.

So I tested replacing their eyes with black obsidian orbs, and was pleasantly enthralled. 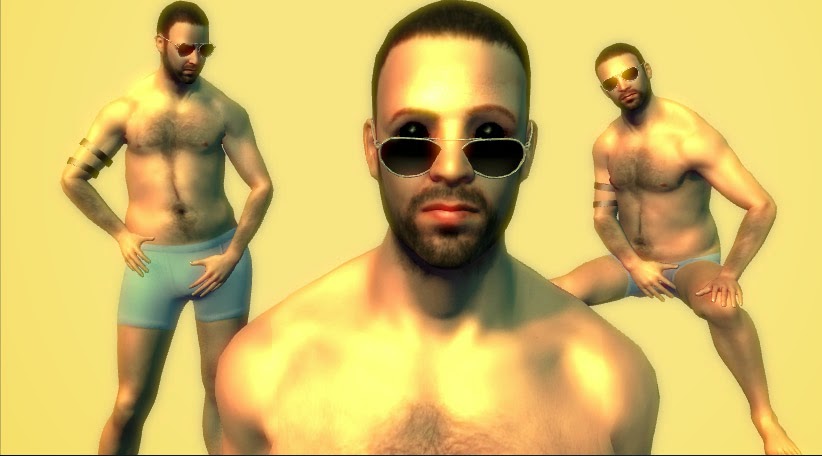 The satanic angle also suggested an ending: after consuming the carrot / popsicle / corn dog and hypnotizing you, he has nothing left to feed upon, so he reveals his demonic nature and proceeds to consume you.

It gave me a great opportunity to use glitching dance animations from previous prototypes, surreal software bugs that I usually reluctantly fix -- except this time, I could finally weaponize the glitch as a technique of evoking instability. The distorted voices and tunes of past collaborator Arca also help foreshadow this demonic turn.

In this sense, "Succulent" evokes the act of "sucking" and the sensory pleasure of taste, as well as a gender reversal of the legendary succubus.
at 3:17 PM
Email ThisBlogThis!Share to TwitterShare to FacebookShare to Pinterest