"Pylons are my penis": a phenomenology of building in Offworld Trading Company and other strategy games 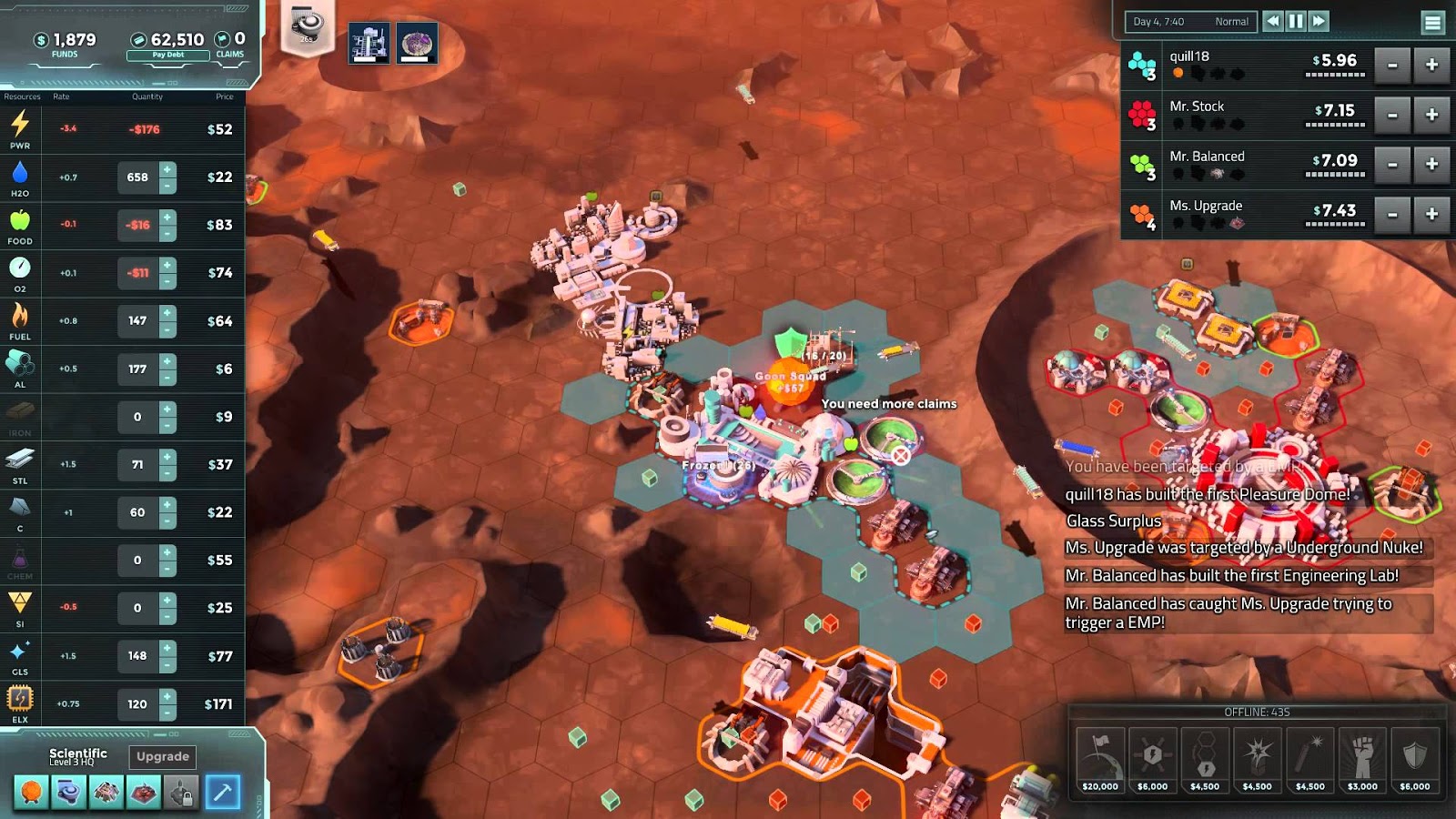 Game feel always has a narrative aspect tied to the player's in-game identity -- but in a top-down strategy game, who are you? Why do you know all this stuff, and why are you able to do the things that you can do?

I'm not asking for more bullshit handwave-y game lore ("it's the future, you're a space wizard") but rather I mean it in terms of interface and "raw experience". Even in strategy games with fog of war, there is still a fantasy of absolute certainty involved with your command. If you see a unit, it's almost definitely there; if you order a unit, they will definitely try to obey your order. If your unit dies, it is definitely dead.

These are all myths and abstractions away from how a real-life military often works, where commanders must constantly act on incomplete information, even about the state of their own forces. Few popular real-time strategy games let troops ignore an order, be routed, or be "missing in action", because maybe that's too unfair or it would weigh down the game a lot. (Some notable exceptions: hardcore military sim games often simulate supply lines and unit morale, the overburdened 2011 game Achron had time-travel and alternate universes of troop movements, while the admirable 2010 experiment R.U.S.E emphasized military intelligence and decoys.)

I'm going to propose that top-down strategy games let players build their own identities, and part of that identity is a body, in the form of your "base." 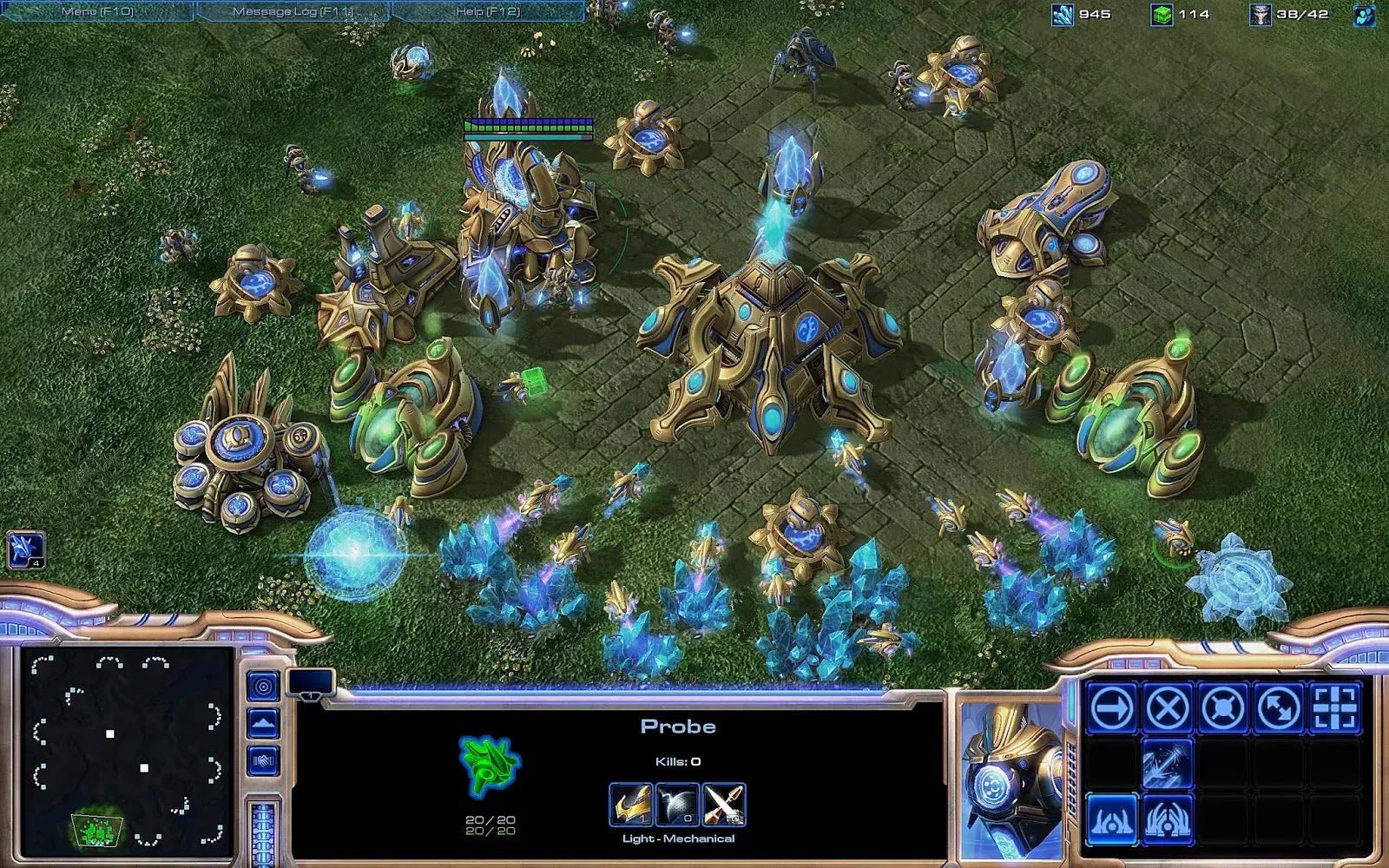 When we play a strategy game, we distribute our consciousness across our bases and armies. Our "town hall" is like our nerve center, our heart. Our scout units are our eyes. Our heavy-hitting spell casters are our hands. Our worker units are... our feet... or proboscis... anyway, you get the idea.

As in many games, your play style represents some aspect of you, an identity that you perform. Is your base timid or confident? Is your pylon placement funny or jealous or sexy? Your embodiment in a strategy game is not a single organic body, but an abstraction of outputs and inputs across space and time. Every resource factory you build is another step in a dance, and every additional pylon you build is yet another crystalline penis for your monstrous base-body.

And when someone sets up siege tanks and nukes your pylons, they have basically kicked you in your dicks, and your entire body reports searing pain.

Don't get me wrong, you can totally kick dicks in Offworld Trading Company, but I think the puberty in Offworld isn't really the same. 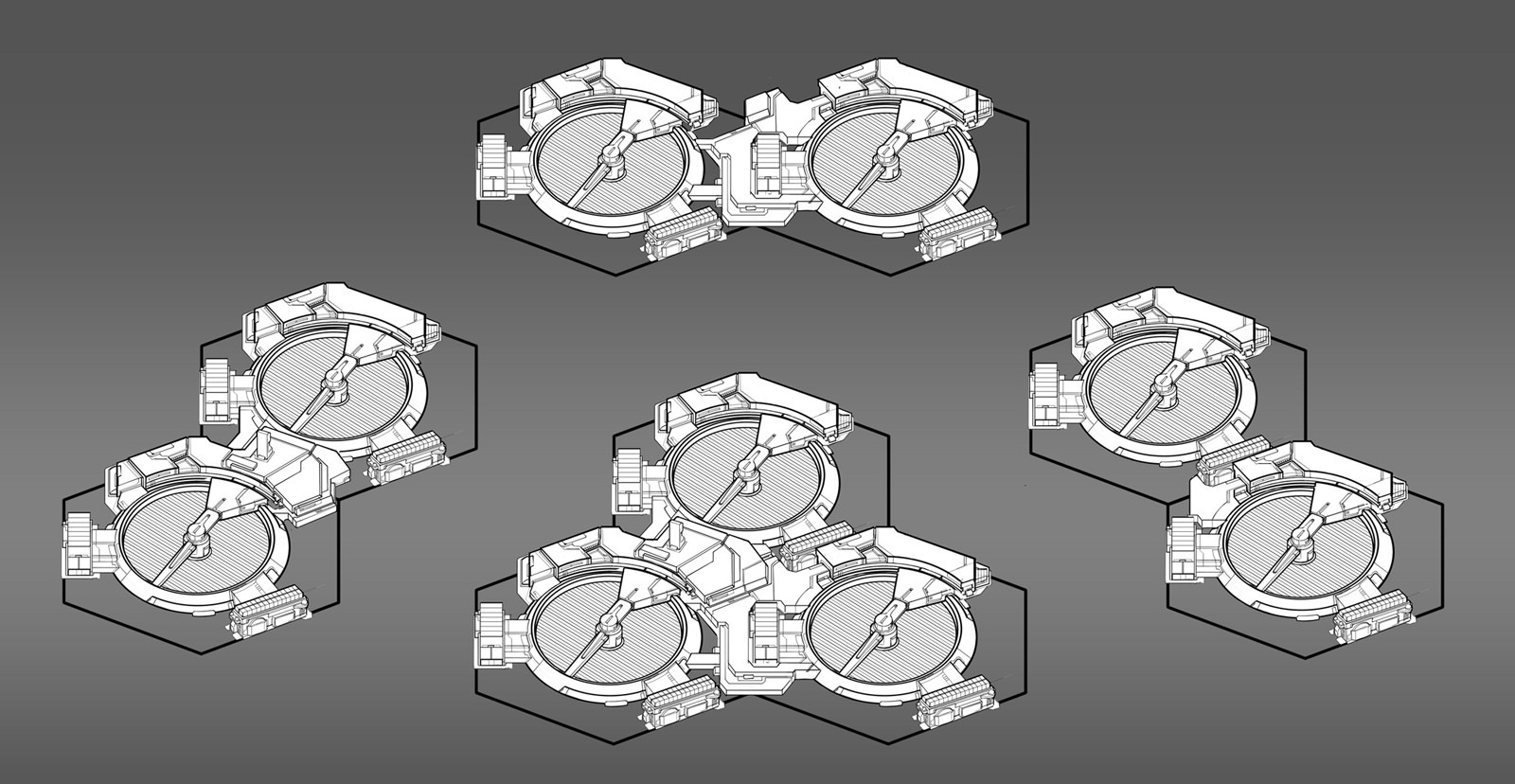 In Offworld, every additional base building / module / organ you add to your base-body is always the same size, and that size is one hex tile.

Diversity of building footprints has been a mainstay of the RTS genre since ur-RTS Dune II (1992), and I think there's a very good reason for that -- bigger structures convey a sense of progress, expense, importance. Small cheap, large cheap, small expensive buildings etc. buildings all feel very different to build. In Starcraft, town centers and crucial production buildings are larger and mineral-hungry, while tech buildings are often smaller and gas-hungry, and this hierarchy of differentiation helps bases feel complex but readable.

It's important that the high level "wonder" buildings in Command and Conquers, or Rise of Nations, often occupy larger footprints in the world -- they represent culminations of your ability to grow beyond small incremental steps. They are game changers, so large and amazing that they're still visible and distinguishable from orbit!

Civilization is an interesting exception, where every building has a "legal" footprint of 1 tile. However, low level cities and tile improvements begin visually as small clusters of shacks that occupy only a fraction of the tile... and then they eventually grow and "spill" over onto neighboring tiles. The spilling is satisfying, like your virtual nation is so prosperous that it overflows the granularity of the game engine itself. 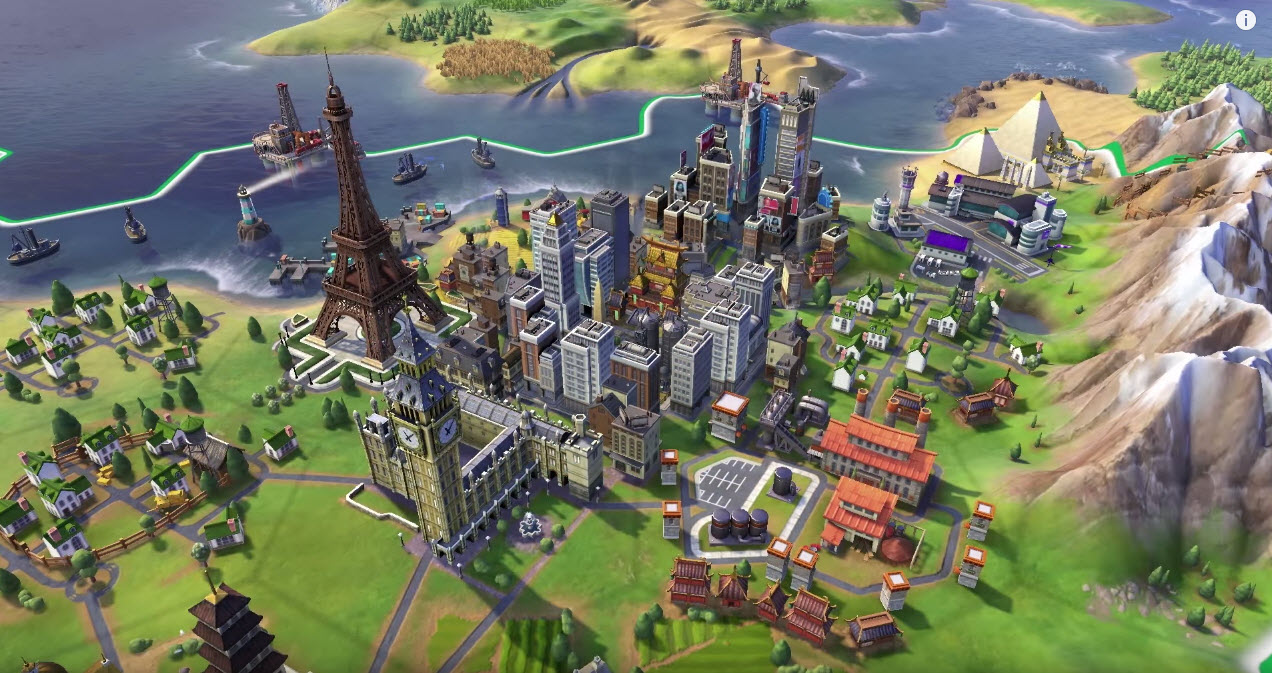 I think Offworld lacks that crucial RTS sensory pleasure of spillage and expansion -- I want to behold my cancerous manifestation of hypercolonialist capitalism, with all its innumerable moving parts and structures, envelop the entire world and extract all its natural resources and leave it as a hollow husk. (see also: "The slime mold is as good an economic model as any")

In contrast to most other strategy games, the base-building in Offworld Trading Company feels really constrictive. You can only build new buildings if you can "claim" the land there, based on a rare "claim" resource allotted to each player. By the end of a match, your base will be maybe 15-25 tiles large, a fraction of the playable map area with hundreds (or thousands) of open tiles. If bases are our bodies, then Offworld forces our body to mature in a crawl space in the middle of a mansion.

There's a bit of a wasted opportunity with exploring the politics here, because in real-life the act of claiming land ownership is a very political act. In the game, who manages these land claims? is it the space government? as a Corporate Person, should I resent Big Space Government for regulating my expansion?...

Of course, Offworld isn't really this type of game, so instead maybe we should consider the formal game design reasoning behind the land claim mechanic. Maybe they want to make base placement more meaningful, with all these tile adjacency bonuses and limited possibility spaces, and de-emphasizing the RTS tradition of secret bases and expansion towns. This reads like Thoughtful Good Game Design that facilitates a focused Series Of Interesting Choices, but it's still so... unsatisfying. 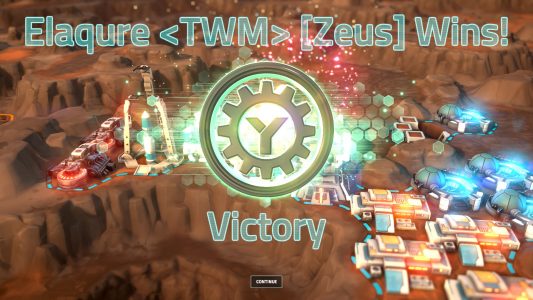 I suspect Offworld secretly knows about this lack of satisfaction, which is why each match ends in some desperate firework effects when you win. ("What will make winning feel better?... Um, fireworks UI!")

"Juicy" effects like fireworks particles are tied to a specific event, in this case your victory for clicking a button to buy-out your opponent. But this kind of one-off event is bad at emphasizing a duration, a context, a heightened state of awareness and embodiment across space. In contrast, a thriving nation of mega-cities in Civilization feels like a never-ending firework.

To me, this is like a "slow juiciness" that comes from the pleasure of building and growing. Maybe it's a sort of "fermenting" of the juice? And it's delicious. It makes us drunk.

Some players want an RTS to help them feel clever in their risk-taking, or feel rewarded for their calm persistence. I think Offworld certainly does that for them. Strategy for the strategy gamers.

But I think I've learned that I want my strategy games to help me feel like Macro Falco (NSFW, don't click this), I want my weird base-body to feel impossibly large with dozens of fully-upgraded expensive titanium penises that spill over each other and crash the game -- as with the horrifying Magnasanti in SimCity 3000 testing the limit of the game's ability to simulate it -- the extent of my awareness and presence, multiplying endlessly, forever.

(Ian Bogost calls this "transit.")
at 11:00 AM
Email ThisBlogThis!Share to TwitterShare to FacebookShare to Pinterest