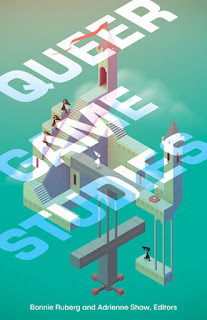 For the upcoming book Queer Game Studies (2017), I contributed a chapter on the "FeministWhore" scandal in the game Dead Island. It is a "ludo-material" political analysis, looking at gameplay as expressed by source code, intended for general audiences. Here, I'll talk a bit about the ideas and process behind writing the chapter, and then briefly summarize the main argument.

First, to remind you, here's the reporting on the scandal back in 2011 from Kotaku:


One of the unlockable skills for Dead Island leading lady Purna allows her to deal extra damage against male victims. It's called Gender Wars in the game, but the original skill was named "Feminist Whore."

There's a lot to unpack here, and one goal of my chapter is to expand what we mean by "representation" in games. Currently, whenever we criticize a game character for its politics, such as a racist or sexist stereotype, we tend to focus on the character art, animation, writing, and voice acting. Why not expand representation to encompass the richness of the entire game experience and game engine itself?

My analysis follows Mark Sample's excellent "Criminal Code: Procedural Logic and Rhetorical Excess in Videogames" in focusing on the procedural politics of game mechanics and balance, and comparing that to the systems as intended from the source code. FeministWhorePurna is an ideal case study: it was a contemporary event with modern game engine architecture and a player / modder community that practically did the gameplay and forensic analysis for me already. (I also forced myself to play a bit of Dead Island to verify everything.)

You'll have to checkout the full book from your library, or buy it, or whatever, to see the full essay, but I'll try to briefly summarize the argument here, and in more game developer-y language as appropriate:

Purna Jackson is one of four playable characters in Dead Island, a kinda-mediocre AAA open world first person co-op zombie RPG from 2011. Her character bio lore, narrated aloud and displayed prominently in-game on the character select screen at the start of a new game (see image above) situates her both as an Aboriginal woman of color and former Australian police officer wronged by institutional patriarchy.

In any other game, this clearly-wronged rightfully-angry black woman could've been an extremely progressive portrayal of a woman in video games -- and so few games feature Aboriginal people! -- but I argue this isn't really the case here.

For comparison, the other playable female character Xian Mei (an East Asian woman from Hong Kong) vows to avenge her father and ends her monologue with, "I just need the opportunity to prove myself."

The contrast is clear: Purna is the angry emotional black woman who resents all white male cops, while Xian Mei is the patient competent lighter-skinned woman who feels indebted to her amazing dad. Guess which one the game pushes most strongly as a stand-in for capital-F Feminists?

Feminist Whore, or "Gender Wars" in the release version, is an upgradable player ability that gives Purna a percentage-based damage bonus against the "opposite sex", starting at +5% and up to +15% damage at level 3. The in-game icon consists of a Venus symbol (♀) with a clenched fist stencil inside it, invoking radical "Woman Power" feminist movements from the 1960s.

To progress in the skill tree, players only need to choose 1 of 3 skills in each skill tier, and the player community consensus is that Gender Wars is definitely the best choice in this tier -- the other two adjacent skills are about melee weapons and kicking attacks, which are irrelevant to Purna, who specializes in shooting guns. Plus, the vast majority of zombie enemies and bosses in the game are male.

A bit about how this skill works in the game engine: Dead Island uses plain-text scripting files (.SCR files) to bind specific abilities to a player character. In pre-release versions, "default_player_setup.scr" seemed to function as a manifest to give the character Purna all her abilities, and one was "FeministWhorePurna." It's important to remember the internal code object is called "FeministWhorePurna" and not just "FeministWhore" -- the other playable lighter-skinned woman Xian Mei does not have this ability, nor any ability that interacts with gender -- only Purna is a feminist whore.

So from a gameplay perspective, as well as a technical perspective, the game pushes really hard for Purna, and Purna alone, to represent an angry feminist of color who uniquely specializes in sniping men from a distance. 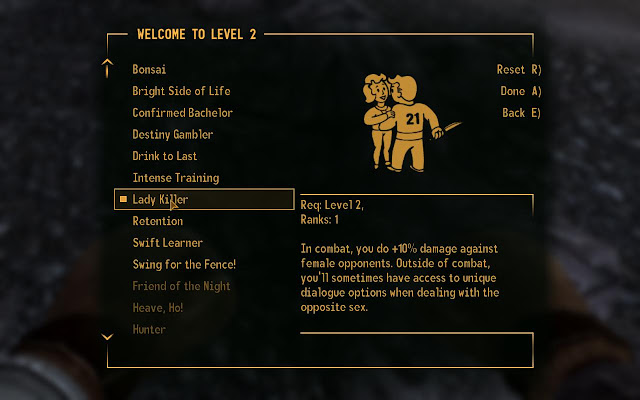 Gendered damage bonuses are, of course, a long established video game trope. Modern Fallout games have player "perk" upgrades that give damage bonuses and extra conversation options against other genders. However, the damage bonuses here are trivial, and most players read this upgrade as an opportunity to unlock more narrative content. With ability names like "Black Widow" or even same-sex equivalents like "Cherchez la Femme", Fallout designers try really hard to frame these gendered upgrades in terms of seduction rather than violence. Dead Island departs from Fallout's tradition in focusing solely on aggression and a damage bonus, and offering it only to a black woman.

I believe many players would view gendered damage bonuses to be "apolitical" in the context of an open world sandbox design tradition, where most NPCs are "generic" (as opposed to important "named" NPCs) and players understand these generic identities as mostly meaningless and arbitrary. If the game engine freely spawns / despawns these characters based on the player's location, not even their existence matters. The generic identity is just a bunch of randomly selected traits that aren't supposed to mean anything beyond how best to incidentally kill them. This kind of system implies to players that generic instances of "female", "male", and "weak to fire spells" all boil down to the same type of meaning... basically, gamers usually reserve political meaning for named NPCs, cutscenes, and authored narrative content -- again, this is "seen" representation.

Many game developers worked on Dead Island. Imagine months of tuning and tweaking an enormous amount of game content -- and collectively shrugging every time they saw the words "Feminist Whore" in-game as well as in the scripting files. Maybe one rogue misogynist programmer put it in the game, but dozens of people certainly kept it in the game, changing it only after most of the game was already done, because they didn't consider it to be "high priority."

But maybe the worst part of the developers' technical complicity is that Dead Island systematizes gender solely to implement FeministWhorePurna. In this game, no men ever target women for being women, and because Dead Island omits any such systematization of misogyny, it depicts Purna's male-targeted resistance as totally unprovoked, coarse, trivial, and irrational.

This is why Dead Island is anti-feminist even if it omits the words "Feminist Whore": because the logic of misogyny is baked into the game systems itself. By simulating feminism but not misogyny, it argues that misogyny does not exist, and thus, portrays "Gender Wars" as an irrational one-sided emotional vendetta instigated by women of color "agitators" against "gender-blind" men who are also mostly "apolitical" generic NPCs.

Those are big design challenges, but I think Dead Island still could've reflected the complexity of feminism in much smaller ways as well:
I'm not saying those are the best design ideas ever (well, that last one sounds kind of awesome to me) but rather I just want to suggest that there is a lot of unexplored possibility for gendered gameplay systems in open world games.

It is my earnest misguided hope that, some day, gender in RPG sim games will move beyond simple damage bonuses or even Fallout's fuck bonuses. What if we treated gender with the same complexity we devote to countless bullshit gun crafting systems? A boy can dream...

In the end, this isn't just about Dead Island. Instead, I want to emphasize Dead Island as a case study of how we shape and understand our worlds, both real-life and virtual.