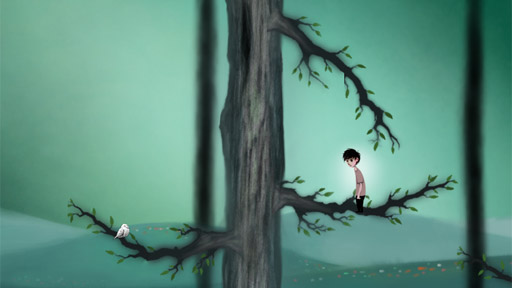 First, play "Elude" so you know what I'm complaining about.

The core of Ian Bogost's "procedural rhetoric" is the idea of meaningful player agency; and for a choice to be meaningful, there must be a viable alternative.

In MIT Gambit's "Elude," the only thing new it brings to the platformer / doodle jump genre, a "resonate" verb, does not have any cost associated with it. There are no consequences to it. Thus, you can just spam "resonate" all the time and everywhere. It might as well not even be there.

(Yet in real-life, you can totally resonate with the "wrong" thing: a political party promoting racism, the co-worker who turned out to be crazy, the great apartment that turned out to be full of roaches and leaky ceilings, etc.)

But let's assume, for the moment, that the procedural rhetoric in Elude is sound and not just some re-skinning of a platformer...

The stated idea and utility of the game still strike me as strange -- after all, is there a single person in the world who has never experienced depression, at any point in their lives? Few people will need a game to tell them what depression feels like.

What would've been more useful, in my view, is to be specific with regards to modeling certain kinds of depression -- PTSD, empty nest syndrome, a mid-life crisis, the entirety of high school -- which are rich experiences within unique real-world contexts.

Don't get me wrong, Elude is a very pretty game. It's just not a very good one, no matter how you look at it.

In addition it makes me question the quality of the game design program at MIT Gambit -- and game design schools across the country in general. It's good that many students (including me, huzzah!) aspire to create meaningful games, making arguments through procedural rhetoric for social justice and change... But if the result is something like this, are we really doing it right?

How do you teach design, exactly?

I don't really have an answer, other than "make students make things and then criticize them." So that's my criticism. See? I do my part.
at 7:00 AM
Email ThisBlogThis!Share to TwitterShare to FacebookShare to Pinterest