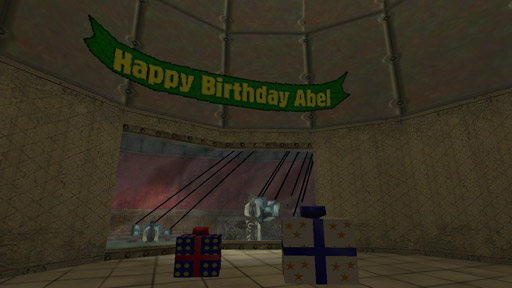 "The Puppy Years" was Brendon Chung's last single player mod for Half-Life 1, released in August 2004. (Previously: Part 1 and Part 2 and the lost but found Droptank Oscar)

In some ways, it's the most disappointing. It has a great premise (a super-charged stealth spy baby that can climb walls / slow time) and has a great feel to it and Brendon is resourceful as ever with the hacks he uses... but unlike "Bugstompers," the narrative is really lacking here.

(spoiler alert is in effect!)

In fact, there's not much plot at all: you spawn. You do a fun tutorial. You get sent on a mission. Then you come back and everything goes to shit. (In some ways, this is a precursor to Gravity Bone in terms of playing with FPS single player structure; you expect a second mission, you expect the game to go one way -- but then it doesn't.)

Compare this against Bugstompers, which has a really great narrative / character moment in the middle. In the Puppy Years, there aren't any well-defined characters other than the player character. Which gets a little boring. Who's my enemy? What, exactly, is happening? You never really know.

Player character development through gameplay. In so many games, a cutscene or a paragraph of text will describe your player character for you. This is lazy. (And yes, I am guilty as charged.) The Puppy Years literally starts this way, with a cute but unnecessary storybook sequence. 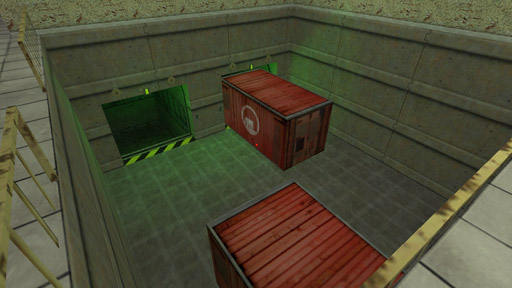 But it doesn't really hit you -- the idea that you're a secret agent baby -- until the you spawn. That's when you have to start acting, playing and thinking like one.

The camera height is perpetually at waist-level; you can't crouch because you're 2 feet tall; you push giant cargo containers with relative ease; you drink milk and eat cookies for health; you hold +use to hack keypads; you climb walls.

These are all verbs and affordances that didn't exist for you as Gordon Freeman; by virtue of you simply doing these things, Brendon is already defining a separate player character. This is also another reason why it is important that this is a mod, because if it were a standalone game then you wouldn't compare it against your player abilities in Half-Life 1 and the contrast wouldn't be as clear.

You're a toddler because the controls and mechanics make you feel like one. 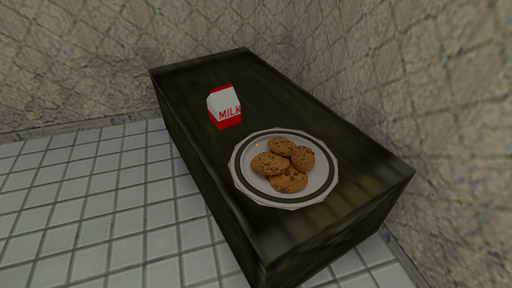 I have mixed feelings about the latter half of the mod, though...

Basically, it turns into a really easy bullet time grunt-fest.

On one hand, it's really cool to decapitate people and watch the blood squirt out as bullets whiz past you. And I remember when I first played The Puppy Years, like 6 years ago, I really enjoyed this sequence. 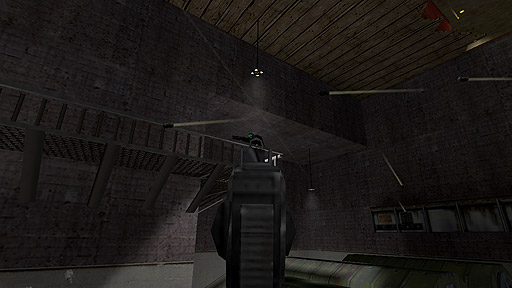 I thought it was a great application of the slow motion host_timescale hack that Chris "Autolycus" Bokitch (Valve's former mod community liaison / web developer) showed in 2002 / 2003 in the old "Anomalous Materials" forums at Valve-ERC.

But now? I don't know. This sequence with the modeled bullets and tracers and decapitation and blood pools, is probably the most technically advanced feature of all of Brendon's HL1 work... and yet it's the thing that's most glaringly old, from a generation of game development that really regarded Max Payne's raison d'etre as something still genuinely interesting. (These days we just treat it as a throwaway feature or a special effect.)

I don't know what I'm saying. 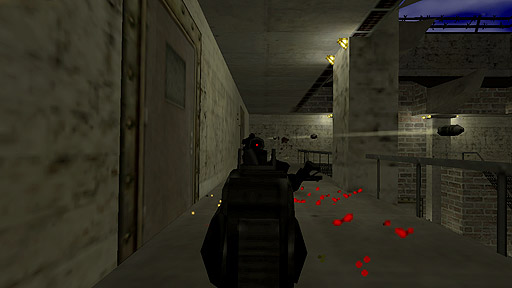 On one hand, you have some great work with character development here -- a wonderful example of Brendon's voice coming through in the design, using resourceful hacks.

On the other... there's also this jarring dinosaur of game design that wasn't that great to begin with, where every other game mechanic gets thrown out and you just artlessly shoot people in the face like every other first person shooter.

I think Brendon might've wanted a climactic ending to the game, to surprise the player. In some sense he succeeded, but in some sense I think it's poor design.

Maybe there's something to be said for that sudden shift, that it was intentional.

But much like what I argued for MIT Gambit's "Elude," it's difficult to distinguish between intentionally-bad and unintentionally-bad. Assuming you think that might be what's at work here.

... but don't despair! Everyone has their ups and downs, yeah? It's a reassuring affirmation that he's human.

The end of the "Mod Auteur" series for Brendon Chung signals the start of the "Indie Auteur" series -- his indie FPS work is among the best out there. See you on the other side...