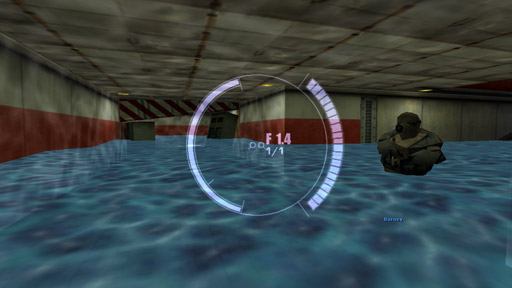 As part of the latter half of Brendon Chung's work in Half-Life 1, Bugstompers is an experiment mainly in (1) a camera gun and (2) narrative and conversation in the FPS. I think this is where he really hits his stride and you start to see shades of thinking that led to the stunning Gravity Bone.

Though there's lots of other cool stuff; a long-term AI companion who never leaves your side, a cool animated caustics effect, a clever dynamic light effect at the end, etc. But the gun and the narrative are what I get out of it:

First, the gun. It's cool to adjust and fun to use. I can't remember the last time I found a gun in an FPS to be so interesting to play with; you can adjust the different settings to produce a sniper rifle-like gun, or a shotgun with a widespread, or an SMG -- all fairly accessible with good feedback and tangible results. 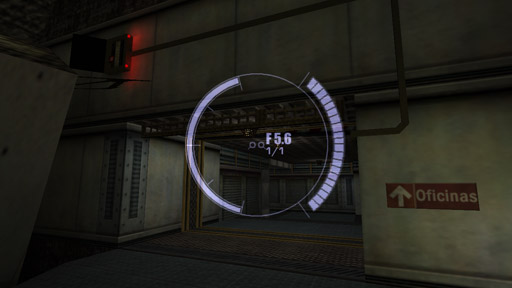 How does the gun give you feedback? Well, Brendon's choice of wall textures (and flat lighting) is also smart here -- namely, it's a rather plain metal panel. So when I'm fiddling with the gun and not sure what effect my specific settings produce, I can fire at a wall and examine the pattern of the decals / bullet holes pretty easily. If the wall texture were much darker or noisier, it would've made this process of discovery more difficult.

And then there's what I regard as Brendon's specialty: storytelling. Specifically, there's several great sequences with doors. It would be pointless to describe them, other than to say they're resourceful and demonstrate his ingenuity. (Then again, we already knew that, right?)

But where it really got me was the cutscene of the conversation between your player character and Barney, about 2/3 of the way through. Brendon chose to use floating text winding along this tunnel; you quickly understand it as a conversation that's audible through the tunnel.

(This sort of experimentation is what I really like: don't explain it, but make it intuitive. I think I've made this point before, but I'll say it again -- imagine you're seeing a production of Hamlet, but there are three different actors on-stage saying Hamlet's lines at the same time. You'll come to understand they represent different parts of Hamlet, his personality, whatever. But in a video game? Many developers aren't content to leave it unexplained; they'll tell you you're a psychic CIA operative with spectral goggles that let you see someone's psyche. Which is pointless rationalization.) 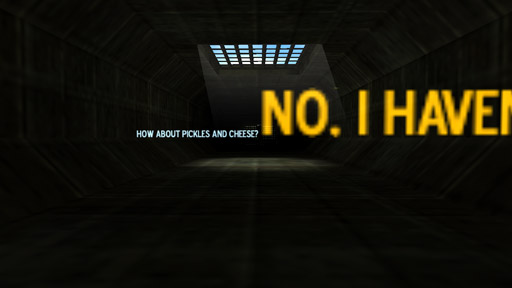 They just faced a horde of aliens... and they're talking about sandwiches. Fantastic.

The conversation keeps going like this until you reach the end, with the two characters catching a breather. You'll recognize the one on the right as your AI partner, Barney, but who's that chick on the left?... 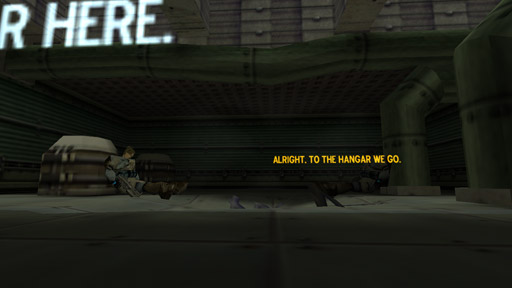 Look at the composition of the shot; your player character is the one not obscured by text, fully in the light. It's extremely subtle (literally, look away for a few seconds and you'll miss it) and has nothing to do with the story or theme or gameplay.

You just happen to be a woman. Maybe to some players this won't be surprising -- but I assumed I was a man the whole time. It's kind of like a mini Metroid moment, done tastefully and artfully.

In conclusion: Brendon Chung has made me like a cutscene.

I should be angry, but I'm not.

(coming up next for part 3: The Puppy Years)
at 7:00 AM
Email ThisBlogThis!Share to TwitterShare to FacebookShare to Pinterest