These are some unreleased levels / environment WIPs I've seen posted around the internet, along with some brief commentary.

Island of the Dead, by Mac "macattackk" Hart. 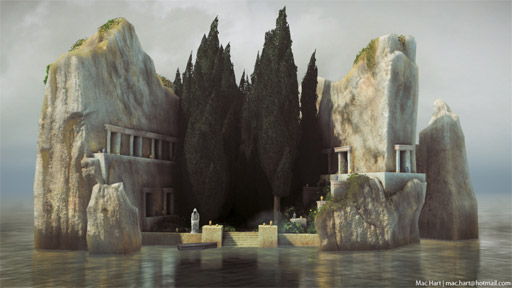 Hart bases this CryEngine3 environment off the Arnold Bocklin's notorious Isle of the Dead paintings. What I really admire here is the masterful control over materials; the normal map on the rocks is really important to ground the unorthodox shape of the rock. It's a really surreal treatment of realism that, I think, is really subtle and difficult to pull off -- a desaturated, muted palette that somehow isn't boring. What I like most about this piece, though, is that Hart is actually fleshing it out into a level. He could've stopped with this one view and one camera angle to produce a diorama / portfolio piece, but now it's actually turning into a legitimate space as he extrapolates the painting's original style. 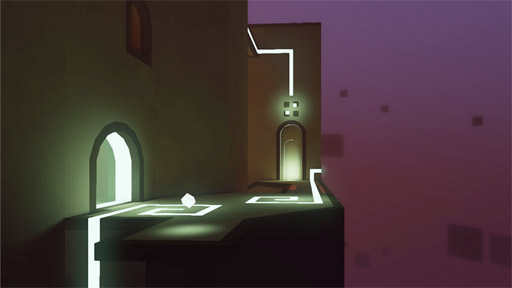 From the creator of Hubris comes another abstracted-architecture UDK thing about, uh, lines and squares. I think Yoder has a really good sense of color in his work, but he's weaker when he relies on texture instead of form -- e.g., his UT3 HOLP level, CTF-Bird, makes some jarring texture choices with the highly repetitious brick tiling. I feel like if that level were just blank surfaces with splashes of color, it would've been much stronger for it, like "Singularity" pictured above. (Bonus points for this tendency toward purple.) His reliance on trim reminds me of the Half-Life 1 era obsession with trim, specifically in the brief cel-shade period at Snarkpit.

If you're going to bookmark a single thread on Polycount, make it this World Machine to CryEngine / UDK tutorial from 2011 by Choco. It makes Hammer's displacement editor / Unity's terrain painter look completely worthless by comparison. Increasingly, we're seeing environment art workflows shift towards becoming more engine-agnostic; what you do here could appear in any engine of the trinity (Unity / UDK / CryEngine). In a way, it allows artists from all 3 communities to pool resources. Meanwhile, over in Source Engine land, the art of displacement painting is dying as the community dwindles and the institutional memory gets lost.
at 6:51 PM
Email ThisBlogThis!Share to TwitterShare to FacebookShare to Pinterest