"In Ruins" by Tom Betts 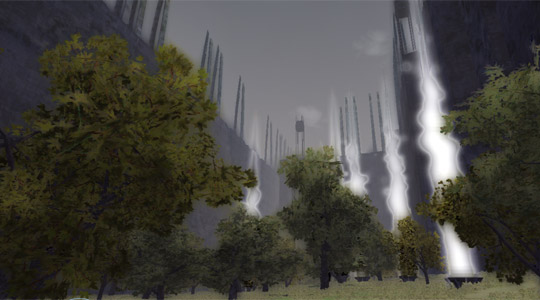 "In Ruins" is a first person procedural platformer-explorer thing. Spoilery critique after the jump:

NOT AS GOOD: Somewhat cursory treatment of text; doesn't stay on the screen long enough (and I consider myself a fairly fast reader) and the longer excerpts should've been pared down or not included at all -- a minute in, I was ignoring the text entirely. Also, I'm not really a fan of SSAO, and I don't think Unity's SSAO is too hot either.

My "chase the fun" observation: I enjoyed myself the most when I was running around the level as it was sinking into the ocean. That was fun. That was good times. I wish the sinking were slower, and I wish it took place upon reaching the top of the main tower instead of teleporting me back to my start position, I thought that was a huge missed opportunity.
at 12:28 PM
Email ThisBlogThis!Share to TwitterShare to FacebookShare to Pinterest