The flat as art; the aesthetics of UV maps.

So the celebration of visual arts in video games like "Into the Pixel" is cool in one sense, but a little dishonest in another -- concept art is not video game art -- that is, it's not the art asset that goes into the game. Rather, I'd argue that the more authentic video game art is the sprite sheet, the texture atlas, the lightmap, the UV map. It's all about the flats. Understanding them requires understanding games on some level. ("UV means ultraviolet, right?")

I propose three aesthetics / three approaches to appreciating the flat: 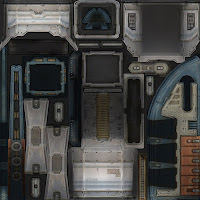 First, we could quantify the beauty in UV maps as a function of how well they project 3D geometry onto a 2D plane with minimal seams, deformation, and waste. A beautiful flat is one that is topologically elegant. (This is a popular value system among game artists.) 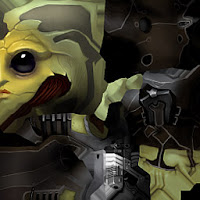 Or, maybe we could view flats as more conceptual pieces. The most fantastic UV maps are the ones where we can't even imagine what the corresponding model looks like. What if you just painted UV maps that don't actually texture anything? The mind will imagine new models, invisible models, dreamed models, impossible models full of nonmanifold geometry and hypercubes. 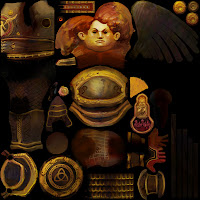 Lastly, we can enjoy them in total ignorance, totally naive of how they function and what they represent. We've skinned so many humans and aliens alive, arranging their torsos into flat pelts -- applying tons of makeup and tribal tattoos to their pancaked faces. It's grotesque, it's a virtual slaughterhouse. We butcher people, animals, trees, skyscrapers, houses, rocks, skies, and light.

It's hard for me to look at flats in this vacuum. All I can see are packing ratios and cylindrical projections. I wish I could ignore it.

Game rendering is a hodge-podge of different hacks and approximations. We have different modules for surfaces, reflections, shadows, screen-space effects -- and nature just operates with photons, a unified consistent system.

But that abstraction, that gap between the natural and the virtual, is also what makes these texture maps compelling to look at, the idea that you can remap shininess to a specular map, or remap motion to a sprite sheet, or remap time to a flow map.

It's like an infographic that only engines and trained artists can read. It's a secret language, shared only between us and computers.
at 9:00 AM
Email ThisBlogThis!Share to TwitterShare to FacebookShare to Pinterest