Castle of the Red Prince, by CEJ Pacian 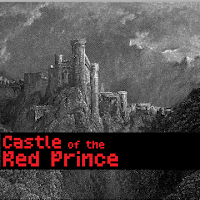 CEJ Pacian is probably the best short-form IF writer today. His (?) writing is usually firmly grounded in a genre -- Gun Mute in Mad Max / apocalyptic Western, Snowblind Aces in pulp adventure -- and Castle of the Red Prince is firmly rooted in magical fantasy.

The best part of his work, though, is that these genres and settings aren't really the point. In Gun Mute, Walker and Silhouette, as well as this newest entry, Pacian is clearly more interested in formal experimentation on a small but vital scale, and the genre is just a shortcut to approach narrative effect faster. What if navigation doesn't involve cardinal directions? What if everything is a metaphor? Above all, Pacian is interested in re-configuring how we perceive and navigate through space, in a way that only interactive fiction can afford.

Castle of the Red Prince's experiment, then, might follow these rationales:
The mechanism in Castle of the Red Prince is this: to navigate, you don't type "north" or "south" or "w" or "e" as in most interactive fiction games. Instead, you just focalize on something -- you "x" or "examine" it. The result is a dreamlike movement as you fly around a space, the IF-equivalent of noclip mode. You're suddenly given real editorial control over your experience, to create montage: cut to the tower, full of monsters -- cut to the dynamite, lighting the fuse -- cut to the tower! -- cut to the dynamite!...

It makes me wonder where other opportunities in other genres lie, for "revolutionizing spatial navigation"... Maybe someday, "fast travel" won't be called fast travel; instead, slowly walking around in open-world games will be called, "'slow slavish adherence to arbitrary physical restraints' travel." Why not let the player save anywhere or teleport anywhere? A Thirty Flights of Loving-ish use of jump cuts.

Of course, a mechanism like this wouldn't make any sense in something like Proteus or Dear Esther. But in a game that isn't really a world, but rather a network of setpieces with distances between them, I think this methodology would serve such games well.
at 9:00 AM
Email ThisBlogThis!Share to TwitterShare to FacebookShare to Pinterest