Portrait of the game designer as a young artist: Avant-Garde, by Lucas "AD1337" Molina 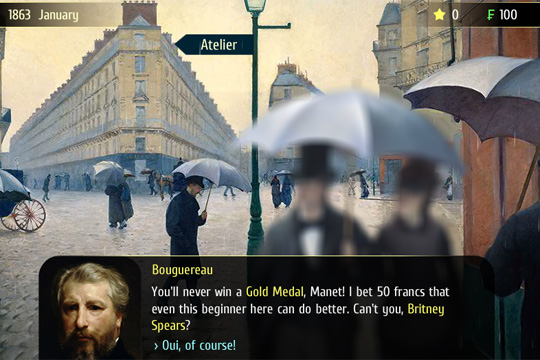 In the short but esteemed tradition of "games about being a struggling artist in the art world", like Jonathan Blow's Painter or Pippin Barr's Art Game, here comes the new and charming RPG-sim Avant-Garde. Look, it even has its own domain name and everything.

Do you toil in obscurity or do you sell-out for fame and riches? What does it mean to be an artist? Why is art supposed to be so damned special -- we don't freak out whether a waiter is "authentically and emotionally invested" in being a waiter. Why shouldn't we treat a painting like a cheeseburger?

The central design problem facing both Blow and Barr was two-fold: (1) how to abstract the process of art-making as a game mechanic, (2) how to code something that can judge the value of your art. The difficulty of coding (2) tells us why all these games are so cynical about art: the curator / critic AI will never be "authentic enough" so it must be broken on purpose, and must be framed as commentary. In this vein, Avant-Garde frames the Salon's (stubbornly conservative) tastes as an art history lesson.

But back to problem (1). What does it mean to paint or to sculpt or to draw? Blow literally implemented a painting program, while Barr likened it to a game of Snake or Tetris. And here in Avant-Garde, Molina abstracts art-making as a set of options in a menu, which seems really unconvincing and boring until it breaks in compelling ways -- optimal combinations of subjects and mediums that lead to absurd riches, impossible sculptures that never existed in the history of art, or an art style that is so insane that it breaks the game entirely: (anecdotes culled from the freeindiegam.es comment thread:)
Inevitably, this game functions more like a mirror than anything. If games are art, and this is how the art world functions, is this what we should avoid? But how can you?

What's interesting is that Avant-Garde engages more with art history (the birth of modern art) than either Painter or Art Game. So if we're going to have an argument about "who's the Monet of video games", first we have to know who Monet was, and how Monet was treated in his own time, etc. and we also have to be contemporary attitudes toward Monet today. Thus, we must become students of art history to critique this game.

It's clearly not finished at all, but... it's shaping up to be masterpiece.