"You sleep rather soundly for a murderer": on murder systems and destabilizing virtual societies. 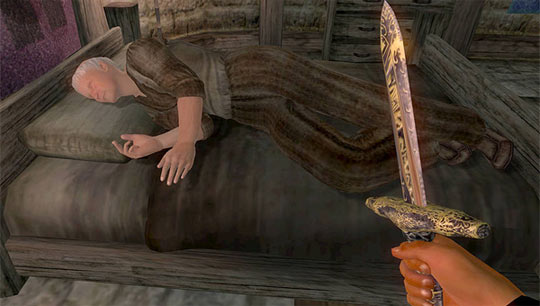 In many video games, you must kill stuff all the time, and quite frequently. Killing becomes the environment. It is so pervasive that killing becomes the context for something else -- clicking on a soldier's face rapidly enough to demonstrate mouse dexterity, or chaining together different button presses to make combos, or optimizing your stats to make a big number even bigger, or carefully managing various bars before they deplete. The killing is rarely about the killing. (Which makes you wonder why we need to wrap it in the narrative of killing.)

During an Elder Scrolls game, you will likely kill thousands of things. However, all of those killings are sanctioned by the NPCs in the game: you are killing monsters outside of cities and villages. Their deaths don't matter -- more will respawn to take their place, or maybe the game will delete them to free-up memory when you wander away far enough. They exist only to be killed. They are domesticated and farmed.

The Dark Brotherhood questlines in Elder Scrolls games, then, are one of the few instances in games that really focus on killing as killing. Specifically, it frames murder as a deeply anti-societal, anti-social, transgressive act, and explores the philosophy required to justify it. At it's best, it's also deeply systemic. 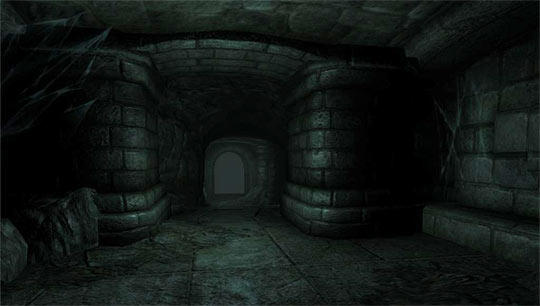 When I first started Oblivion, I left the tutorial dungeon and entered a random dungeon somewhere. After some rat-stomping, I saw a strange silhouette in the distance -- a heavily armored orc. I aimed my bow at its foggy 10 pixel-large head-like thing, and shot it in its probable face. It died. That's when Oblivion told me: "Your killing has been observed by forces unknown..."

WHAT. But why this killing as opposed to the countless other killings I've already committed? Huh?

I check the corpse (an orc, so probably a monster, right?) and the tooltip says "Adventurer." I just murdered a friendly NPC under a racist pretense. It wasn't fair! The game never told me that it'd randomly spawn friendly NPCs in dungeons! Then I thought, okay, no one saw me do it, I'll hide the corpse and take its boots... but "forces unknown" saw me! Ah!

A few minutes later, the game told me I had gained a level, but I needed to sleep to spend the skill points. So I went to sleep. Maybe I'll sleep off the guilt...

But then the game woke me up. It woke me up to a creepy crazy man's face, extremely zoomed-in, telling me he knew what I did. 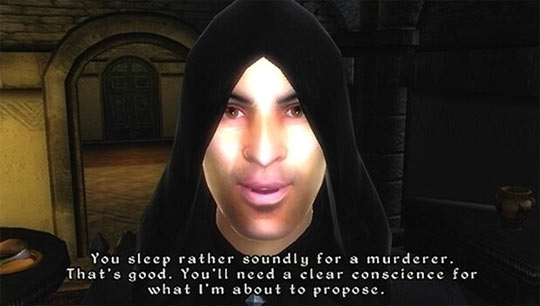 (The camera transitions in Oblivion are sudden and extreme; it's a horrible piece of interface tuning that, unfortunately, works beautifully for moments like this. I fell out of my chair in utter shock / horror. It's like their horrible vaguely human-like face-appendages are bursting out of the monitor to devour your eyelids.)

The implication is that this creepy cloaked talking doll could've murdered you in your sleep, much like how you possibly murdered someone else in their sleep, but he chose not to. Of course in reality, the world is totally stacked in your favor, and NPCs are not allowed to attack you whether you're sleeping or "fast forwarding" in the same place for 10 hours at a time, but the menace and creepiness comes across anyway.

From then on in Oblivion, you are recruited as an assassin for the Dark Brotherhood. And the same thing happens in Skyrim, more or less. (It doesn't really happen in Morrowind because murder is sanctioned as a legal business in that society, so it doesn't have to operate in the dark.) 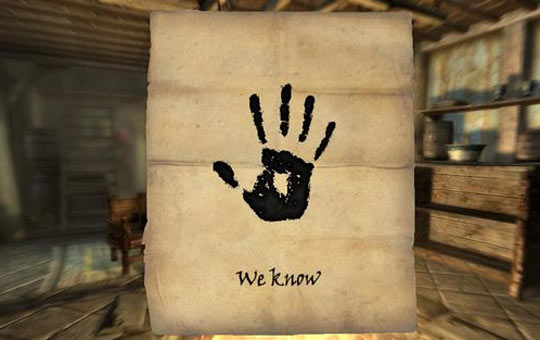 The rabbit hole hooks into various systems, both mechanically and psychologically:
A lot of those concerns quickly fall away once you start doing murder quests, and murder embodies a more predictable dynamic between these different systems. Generally, the worst thing that can happen during murder quests is another humanoid NPC seeing you do it, which adds to your bounty unless you murder the witness too. (Things escalate quickly.) So murder, then, has these systemic qualities:
That last consequence is the reason why the procedurally-generated murder quests, in Skyrim, are so pointless -- there, the game generates an NPC target for you to murder. There's no danger or risk in that destabilizing the game. There's no serious transgression. This NPC exists only to be murdered! Again, it becomes an act of farming instead of murdering.

But the authored murder quests focus on exploiting your pre-existing relationships to cities and NPCs. Murder transforms killing from a pervasive context to a singular act with dramatic preparation and build-up.

Savvy players immediately intuit a few heuristics for limiting possible witnesses:
To me, this is what makes murder fascinating in Elder Scrolls games: it is rarely framed as ethical, it often requires manipulating people / observing the pre-existing system, and it hooks into so many systems. Comparatively, murder in Assassin's Creed means flicking a knife and sitting on a bench, and most of the murder in Dishonored takes place in a deserted city where almost all the NPCs "deserve to die," and Hitman missions are in small separate isolated sandboxes.

But in Elder Scrolls games, murder is about killing people in inconvenient situations -- people who cannot respawn and who probably don't deserve to die -- and their deaths might have far-reaching consequences that threaten to destabilize the entire game.

Like, if you depopulate a town, the system begins ignoring itself. Merchants cannot buy or sell anything because they're dead. Questlines cannot progress because the quest givers are dead. The game, essentially, loses its interactions -- when you kill these NPCs, the game dies too.

And really, that's the only real threat that a game can use against a player: given your choices, the game will let you murder the game, or maybe the game is killing itself?
at 1:04 PM
Email ThisBlogThis!Share to TwitterShare to FacebookShare to Pinterest