On EA's Full Spectrum event: "the AAA dev's burden" and their DRM on diversity.

I honestly thought the Electronic Arts' "Full Spectrum" event was going to be a lot worse, but it was actually pretty okay for an AAA-run event on diversity in games. Going into it, I knew it wasn't going to be some groundbreaking thing on gender and media representation: the event was an advocacy / awareness thing, but it doubled as a press conference for EA to flaunt their brand, and I think that's okay -- marketing is okay as long as we all know it's marketing. They didn't pick the location lightly, a massive sci-fi skyscraper literally 1 minute down the street from the United Nations. It was very symbolic.

Generally, the subject material and arguments presented were pretty basic and really obvious to everyone in the room: a collection of power gays, gay media, LGBT game bloggers, and academics. It was preaching to the converted. Which again, was okay. I thought it was going to be worse. (Later, it turned out to be bad / problematic, but in a different way than I expected...)

The first panel was 3 women and 2 men (good), but only one was a person of color (not as good). It pretty much consisted of the EA guy saying some stupid things and cracking tone-deaf jokes about lesbians, and the rest of the panelists shooting him down and politely chastising his slightly-off attitudes.

Second session was a soft interview with Baltimore Ravens linebacker, Brendon Ayanbadejo, a straight NFL athlete who's pretty outspoken on LGBT diversity and homophobia in sports. The interviewer's job was basically to prompt him to say his talking points. Again, that's okay, that's expected, and he said okay things. 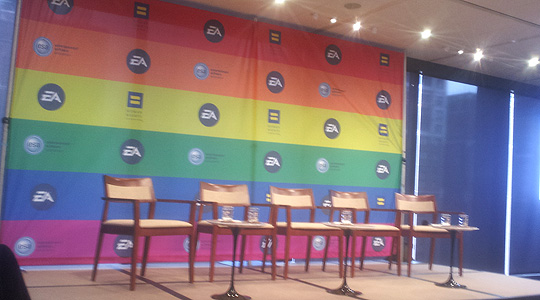 The last session was another panel, this time about the industry's role in promoting advocacy and what the industry could do. This, to me, was when the real problems actually came out. First: there was only 1 woman on this panel, a representative from the HRC, and she was basically there to plug the HRC's (ineffective, boring) efforts. So the only woman on this industry panel wasn't actually a member of the game industry... okay. (She barely said anything the entire time.)

The rest of the panel was: a BioWare Austin manager, a Battlefield community manager, and some corporate event meetup guy.

One of them likened the game industry to the television industry: something like an HBO or smaller cable channel has to take risks and do more controversial things before a larger TV network can move into that space. The analogue is clear: there's indies and there's AAA, and indies can do bolder things with less risk.

So I stood up and asked them a question: by that logic, if you were really interested in promoting the spread of diversity, then shouldn't you be supporting indies more, as a source of these more diverse voices? (Implied premise: given its power and stature in society, EA has a social responsibility to improve diversity and representation in video games. EA seems to agree, given that they put on this event.) 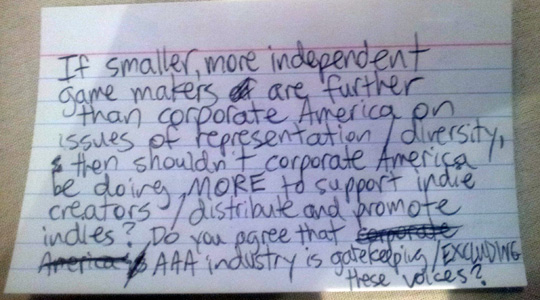 I mean, I'm fairly convinced that EA, as a developer, genuinely wants to change and strengthen diversity in their workplaces and games -- okay. But EA is also a publisher, distributor, and platform-owner: they more or less control who gets to see what. They are gatekeepers of media. People are already making diverse games with diverse stories in their diverse voices: the barriers to creation and distribution just need to come down. I was expecting them to say that they agree: more open, more inclusive platforms are needed, and "EA is committed to reaching out to... " blah blah blah.

But then the BioWare Austin guy informed me that indies were already living in a "golden age." (exact quote)

Tell that to every struggling indie game developer everywhere. Look at the hundred-acre graveyard of failed Kickstarters. Look at the flooded shelves of Greenlight. Look at the metric tonnage in IGF submissions every year. Yes, we should be grateful for what we have, because it's better than uploading a shareware demo to a BBS like the olden days!

I'm not upset at him, though -- he knew he was lying. He said, verbatim, that there were "thousands of platforms" for us. He mentioned iTunes, and then hesitated -- he clearly thought to say "Steam" but knew he shouldn't say it in front of corporate EA suits sitting in the back corner.

And to me, that's where the disconnect is: EA the developer can, and will, promote diversity in games. (Great!) It's just that EA the publisher wants to solely own that diversity and manage how that diversity gets distributed.

Too bad the concept of "a monopoly on diversity" makes no fucking sense.

Listen, I don't think I'm even saying anything particularly anti-AAA or anti-corporate here: a more open platform, with more content creators, is not just good advocacy but it's also good business. Valve and Sony have been pretty good about trying to reduce their barriers to indies -- Sony made their PS Vita Mono-based SDK available for free and actively talks to indies at almost every conference, and the head of Valve is talking about scrapping Greenlight and replacing it with some kind of open API. Indie developers are not competitors to be dismissed or ignored or silenced or excluded; rather, indies are potential business partners.

In "A Room of One's Own," Virginia Woolf argued that relative poverty and lack of freedom was what kept women from writing. So strengthening diversity is fundamentally about decentralizing this access to power. Diversity is NOT just "the AAA developer's burden", to labor in isolation for 1-3 years making an action RPG game with a throwaway token LGBT character -- it's also about fundamentally changing how the AAA industry operates with respect to its customers and fellow developers, and INCLUDING as many voices as possible.

Dear EA: Don't lock diversity behind DRM. Open your platforms to indies, open your engines to modders, and open your games to the customers who kindly bought your game instead of pirating it.

(Related: modding / hacking Dragon Age 1 to make Alistair gay = an amazing game narrative... which was possible through MODDING. Imagine how many different stories we could've told if there were Dragon Age mod tools available! Alas, that'd probably never happen -- mods often devalue paid DLC because player realize how shitty the DLC is compared to the free, more authentic content made by modders. The alternative is to make good DLC to compete, which really only Valve and Blizzard do. (EDIT: Apparently there were Dragon Age mod tools! How come its mod community never took off?...) Now, as we see DLC take off more and more as a revenue source for AAA, we're going to see less games open to modding, which will result in LESS DIVERSITY in games.)
at 4:25 PM
Email ThisBlogThis!Share to TwitterShare to FacebookShare to Pinterest