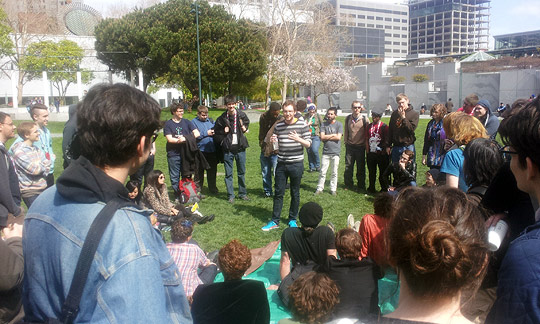 As 1/4 of the organizing force behind Lost Levels (the other 3/4 being: Harry Lee, Fernando Ramallo, and Ian Snyder), I'd like to talk briefly about it.

It went really well. Like really really well, much weller than I ever thought it could've went. At least 150-200 people showed up, and we had about 50-70 speakers in the end. Thanks everyone.

I'm sure all attendees and speakers have different takeaways from Lost Levels: on the power of organization, the ultimate uselessness of Powerpoint, why GDC must be destroyed, why GDC must exist, etc. At the very least, I'd like to think we succeeded, to some degree, to break down a sense of "exclusiveness" and unreachability among all game developers and players.

As a former modder, I occupy a strange space in the game developer ecosystem: my background is in AAA tools and techniques, but my politics and interests will often clash with AAA politics and interests. I can't identify completely with the more militant indies nor more militant AAAs. However, I do think militancy has a crucial purpose, and that purpose is to move the middle to a better place, and right now I think that place is toward those who have the gall to align themselves with the forces of human empathy.

Now, all throughout Lost Levels, I felt very conscious of this appearance that we're "against" GDC. Again, we are not against GDC; rather, we are against a pervasive system and mindset that prevents GDC from changing for the better. A giant corporate conference structure has strengths, but it also has very real gaping flaws -- its expense forms a prohibitive cost barrier that fundamentally limits the diversity of voices who supposedly represent all game developers, which enforces a monoculture of ideas and works. Monocultures kill games.

My main takeaway from Lost Levels: we all possess some degree of power. We must simply exercise it collectively, decisively, and tenderly.

Thanks for participating and see you next year!

(As a reminder: I am only 1 of 4 Lost Levels organizers and my opinions do not necessarily represent the rest of the organizers' opinions; it's okay if you disagree with me, you will still always be welcome at all Lost Levels existing and imaginary, whether I'm helping to organize it or not.)
at 1:39 PM
Email ThisBlogThis!Share to TwitterShare to FacebookShare to Pinterest