"Lun3DM5: You'll Shoot Your Eye Out" by Matthew Breit and Andrew Weldon 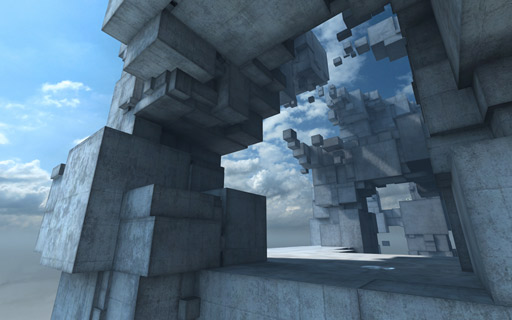 They finally got it done; download the map / read Breit's write-up and Weldon's write-up.

Flipping through the screenshots, I'm not sure if I would've went with such a noisy concrete texture for this, as it kind of muddies up the real star here -- the ambient occlusion on the surfaces, the subtle lighting. I also would've went with some more color too. Though maybe with this, he wanted to differentiate himself more from Rob Briscoe's Mirrors Edge abstract speedrun-floater level treatments, and break away from the legacy of GeoComp2 with its demand for very plain textures. I guess in the end, the difference is pretty trivial, as we're just two different flavors of modernists.

I'm taking a lighting design class right now, and it's remarkable how useless it is in the context of real-time game lighting solutions that have no concept of bouncing light or glare -- that's partly what an ambient term, SSAO, and HDR are supposed to simulate.

The paradox is even weirder the more I think about it. Commercial lighting design is all about avoiding harsh shadows, but in the days of the Source Engine, people were obsessed with mimicking the pitch-dark high-contrast shadow projections that aren't photorealistic nor terribly flattering nor well-stylized, yet are still subject to the weaknesses of static lighting. (My history: many were upset that Source didn't have stencil shadows like the other engines, unaware that Source's radiosity tool was much more futureproof anyway; Unreal ended up focusing on lightmap baking too.) It was like hitting no birds with two stones.

My lighting design instructor would cry if he knew what most of us have done: letting our technology fetish get in the way of good ol' artistic composition. However, I think he'd be okay with what the boys did on this very pretty level. Maybe I'll show it to him.

Also, I think Matthew "Lunaran" Breit should, um, share his CubeSpew Python script for Maya. Let's protest by joining servers running this map, and standing still. I propose the hashtag #OccupyLunaran.
at 8:00 AM
Email ThisBlogThis!Share to TwitterShare to FacebookShare to Pinterest