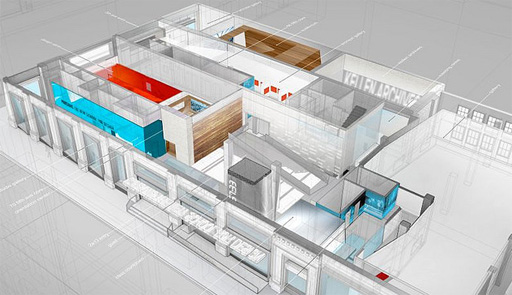 I'm currently taking an architecture criticism class taught by Paul Goldberger, the architecture critic at the New Yorker. These are my essays, along with a post-mortem of how the essay went down in-class. This is cross-posted at the Parsons Games research blog games.parsons.edu too.

Longtime Parsons students and veteran faculty at the Sheila Johnson Design Center are forgiven if they have no idea what Stair K is, and where it leads – it is invisible, and it leads approximately nowhere.


The only unprotected entrance is situated at ground level, on the narrow elbow leading to the bathrooms – here, the majority of the foot traffic quickly squeezes past any drinkers at the water fountains (“sorry, excuse me”) through that 4 foot wide aperture halved by the thirsty. Then, after a brief look in the mirror, those who are now empty immediately scamper back to the wide open civilization of the “urban quad,” framed by what is literally a gigantic glass ceiling. 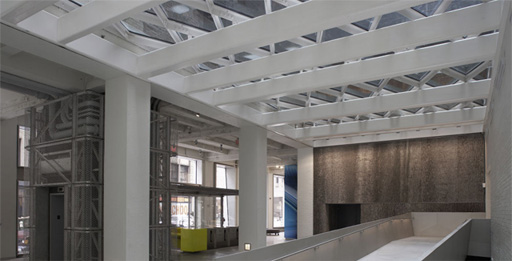 If Parsons kept libraries of nondescript manilla folders, bursting with pages detailing its various white plastered corridors, that unrecognized corner between the water fountains and the bathroom would be a textbook example of a Class 3 Water Consumption / Water Disposal Area. It would barely merit mentioning if only it didn't so completely render invisible, in plain sight, the entrance to Stair K – for people only see what they are looking for and what wants to be seen.

Stairs are accustomed to being ignored. Very few stairwells are blessed with names, and still fewer are ever remembered. In New York City, stairs are simply what gets used when elevators are too full or too slow or too nonexistent; stairs represent the absence of elevators, of polish and technology. They are the very last resort of those who are served.

Stair K sits within the infrastructure between and underneath Parsons, along the structural joint between two buildings -- 2 West 13th Street and 66 5th Avenue. Everywhere else in the building, there is a conscious effort to smooth over the cracks, even at the awkward traverse on the 4th floor with its odd number of steps and imperfect corners; Stair K, meanwhile, utterly redefines the meaning of “cracked plaster.” Steel, brick, and concrete have never before felt so raw. It is perhaps one of the few stark reminders still remaining, that the Sheila Johnson Design Center is actually made of two adjacent buildings. The stairwell demonstrates the messiness of collaboration, marriage, and union.

Unfortunately, messiness is poor design, so Parsons wants Stair K to be forgotten and to remain invisible. Here, deep within the very core of one of the most progressive design schools in the country, is one of the least designed areas in New York City.

There are two other doors leading out of Stair K: an electronically locked door nebulously labeled the “Mechanical Equipment Room,” and an unmarked door at the top.

Outside that unmarked door, more infrastructure awaits, open to the air: several exterior ventilation units, a set of fire escape stairs painted liberally with rust, and a view of the glass canopy from above. Plywood boards and sandbags, strewn about the roof, anchor and frame the glass floor (formerly a ceiling) overlooking the atrium below.

All around, the lit windows of so many classrooms – students working, faculty lecturing, none noticing me, because now I inhabit an invisible and forgotten infrastructure right outside their windows. Suddenly the view from the “urban quad” down below pales in comparison because here there is height, here there is perspective – I can see the planar brick walls dotted with glowing rectangles, some flashing blue and green, in a monastic space insulated from the sound of the street. It truly feels like a holy place.

As I climb up the stairs of the fire escape, I ponder how simple it would be, to open the window to the empty 2nd floor office of the Gimbel Library Staff Annex and steal the office coffee maker. Then I was struck by a similar moment in a similar place, only this place wasn't real. It was a virtual fire escape in the 1998 computer game Thief.

Thief, a medieval first person computer game in the fashion of Myst or Doom, tasks the player with sneaking into Victorian castles and stealing the bevy of valuable possessions locked inside. Because the player is a thief, they must dodge guard patrols and avoid being seen. The virtual castles and architectures of Thief quickly teach players that bludgeoning through the brightly-lit front gate is always suicide. Rather, one must tread the forgotten places like dark cavernous sewers and crumbling tombs, filled with the waste products of societies, hidden from public view.

The idea is that under and between the shiny aristocratic wealth and this oh so tasteful design, there lies dirt and piss and death, and choosing to ignore this legacy is a character flaw – but you, the thief, used your authentic street smarts to know the truth of the city, and thus parting the rich from their valuables is an ethical act.

I did leave the coffee maker there, though.

RECEPTION:
While my essay was held as more engaging than other students' essays about the same building, "almost like a story," I was told I omitted basic facts -- like when the building was built (2008) and who built it (Lyn Rice Architects). My response was that I didn't care who built it, which was probably a dangerous thing to say in a room full of architecture students.

The week before, we had read a lot of articles lamenting the death of architecture criticism, its contemporary irrelevance in society, its need for re-invention, and why architecture blogs like BLDGBLOG were / weren't up for the task. All these issues became clear when I read my classmates' essays; the majority, to me, read like stale book reports, describing the materials (concrete? in a building? with windows!) or even who Sheila Johnson was (a rich person who donated a lot of money?), which to me, is very boring to read.

"You said very little about the actual building." This might be the influence of that blasted New Games Journalism on my writing style. I believe that words aren't good at describing spaces; pictures are better, films are much better, and video games are best; instead, words should be reserved for describing experience.

It occurs to me that I'm still not really sure what "architecture criticism" is, and the range of practice involved with that, but I'm wondering whether this class will convince me otherwise, that words are very good at describing space, because what else could be the unifying thesis of all architecture criticism?
at 10:00 AM
Email ThisBlogThis!Share to TwitterShare to FacebookShare to Pinterest