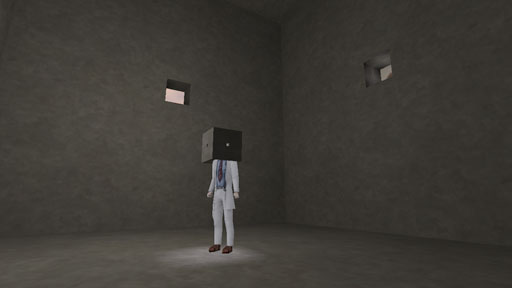 Here's a bit of archaeology for you: in March 2003, a guy named Frank Lantz made a mod called "Prisoner." Google returns approximately zero results on this matter, so it's safe to say that pretty much no one's played this fairly early "art mod." In fact, it's so esoteric it makes my own art mod stuff look like Call of Duty, but I think by the end, through grace of repetition, it's still fairly straightforward and earnest. (Or if you're lost, you can take a look at his list of references to glean some meaning.)

The maps are incredibly spartan and unsophisticated by the standard of the Half-Life 1 mod scene at the time (Adam Foster's Someplace Else, Muddasheep's Half-Quake Amen, and unreleased thing called "Nightwatch") but again, much like with The Stanley Parable or Dear Esther, the point is that the author was an outsider, capable of making something more conceptually complex to compensate for the lack of technical finesse, or maybe we're all just full of artsy bullshit, who knows.

Still, it's neat to see what the current director of NYU's game design MFA program was doing about ten years ago -- well, other than living in Hoboken and playing a lot of poker -- so in the public interest, with Mr. Lantz's permission, I have repackaged it into a Steam-compatible Half-Life 1 mod for you to try.

1) Download it here, 2) unzip it to SteamApps\[account_name]\half-life\, 3) restart Steam, then 4) double-click on "Prisoner" in your game list. Again, you'll need a copy of Half-Life 1 on Steam to play it.


(Conceptually, it reminds me a bit of Ludum Dare 21 entry "Bathos" by Johan Peitz.)
at 8:00 AM
Email ThisBlogThis!Share to TwitterShare to FacebookShare to Pinterest